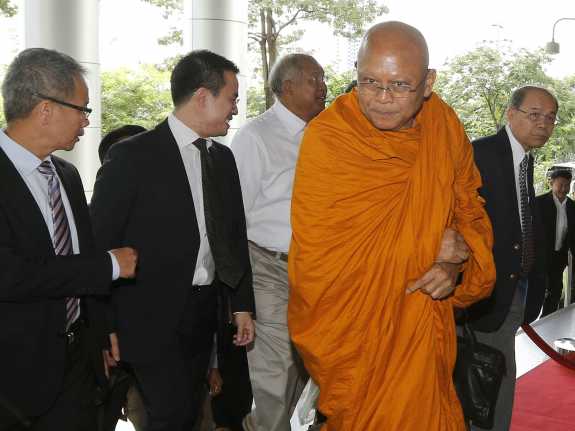 Suthep Thaugsuban, a former deputy prime minister who ordered a bloody crackdown on protesters in 2010 and later encouraged a coup against the elected government, arrives at court on Thursday. In recent weeks, Suthep has become a Buddhist monk.
Image credit: Narong Sangnak

A court in Thailand has dismissed murder charges against a former prime minister and his deputy who led anti-government protests that triggered a coup toppling the elected government in May.

Thailand’s Criminal Court ruled Thursday that it did not have jurisdiction in the case against former Prime Minister Abhisit Vejjajiva and former Deputy Prime Minister Suthep Thaugsuban.

As Abhisit’s deputy, Suthep was in charge of security and ordered a bloody 2010 crackdown on anti-government “red shirt” protesters that killed at least 90 people. The two denied charges of murder and attempted murder in connection with the crackdown, saying their official capacity shielded them.

During anti-government protests earlier this year, Suthep openly called for a coup against Prime Minister Yingluck Shinawatra. Following the putsch, he angered junta leader Gen. Prayuth Chan-ocha with remarks suggesting he and the then-army chief had colluded in toppling the government. Soon after, Suthep went into relative seclusion, becoming a Buddhist monk.

Both Suthep and Abhisit have voiced strong support for the junta that ousted Yingluck’s government.

“The Criminal Court on Thursday said it was true that the two men had declared the state of emergency and ordered soldiers to crack down on the protesters, and allowed them to use weapons and live ammunition.

“The Criminal Court, therefore, ruled that the case against the two men comes under the jurisdiction of the Supreme Court’s Criminal Division for Holders of Political Positions and that it has no authority to handle the case.”

The Post says the case could still be submitted to the country’s Supreme Court by the National Anti-Corruption Commission.