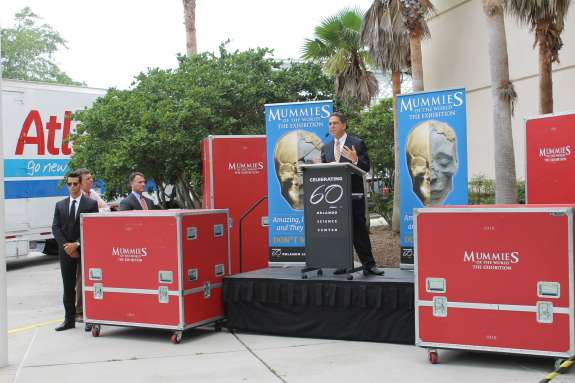 Marcus Corwin of American Exhibitions speaks to reporters not far from a tractor-trailer packed with mummies. Photo by Amy Green

The mummies are part of a new exhibition opening next weekend called “Mummies of the World.”

The mummies arrived on a tractor-trailer securely packed in a climate controlled environment. They include human and animal remains from Egypt, South America and Europe.

Marcus Corwin leads American Exhibitions, which produces the exhibit. He says some were intentionally created, and some are the result of environmental conditions that prevented decay.

“For some reason unlike you and I when we die we will go on and decompose or go on. They’re somewhere between life and death. For eternity they’re going to be here always telling their story.”

The exhibit includes mummies as old as 4,500 years and a modern-day mummy created by researchers at the University of Maryland.

“Mummies of the World” opens June 13th and continues through the fall.