Multiple Systems In Atlantic After Ida, But No New Florida Threats 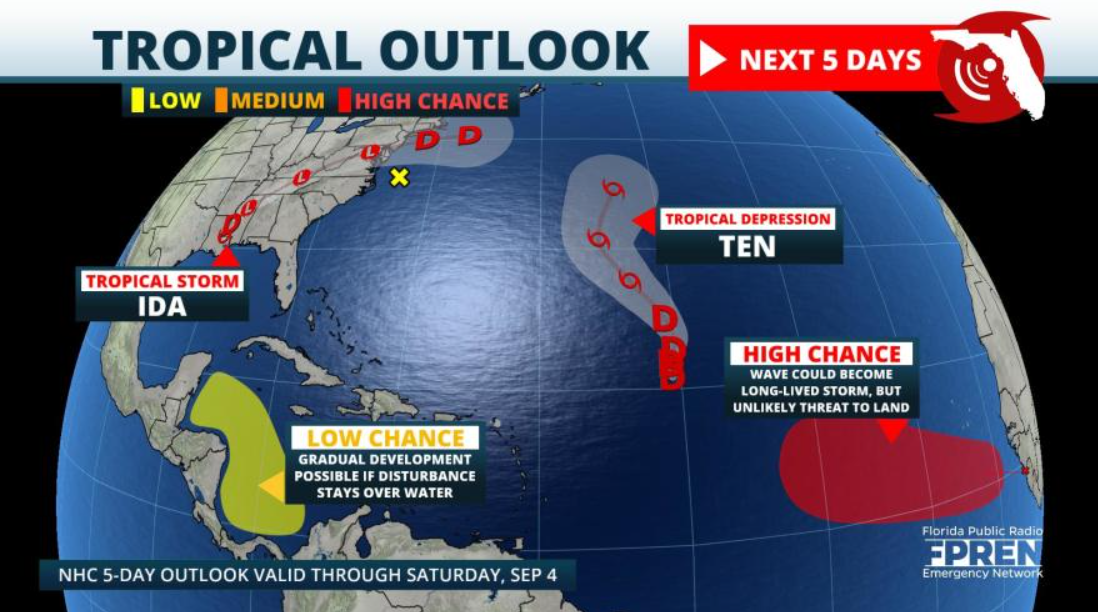 Ida weakened to a tropical storm Monday morning in southern Mississippi, and outer bands from the former major hurricane are forecast to spread across the Florida Panhandle Monday posing a tornado and flash flood risk. Four other systems in the tropical Atlantic basin were being monitored by the National Hurricane Center, but none of them are likely to be a threat to Florida in the next five to seven days.

Two of the four systems not named Ida have already matured into tropical cyclones. Tropical Depression Ten was located more than 700 miles east of the Leeward Islands and could strengthen into a tropical storm this week, but the storm is moving north and likely to stay over water. Post-tropical cyclone Julian was located roughly 800 miles west of the Azores, but also only a shipping interest across the northern Atlantic Ocean over the next five days.

There are two other areas of interest with development potential this week, according to the National Hurricane Center’s Monday morning outlook. A tropical wave emerging off the west coast of Africa is entering an environment conducive for development, and forecasts say a tropical depression or storm is likely to form by the middle or latter part of the week south of the Cape Verde Islands. Long range forecast data suggests this future storm could be long-lived across the central Atlantic, but a weakness in the steering winds would make it unlikely to move toward any land areas of North America.

A broad area of low pressure is expected to form in the southwest Caribbean, which is close to where Hurricane Ida was born. However, development chances are low at this time due to its anticipated proximity to land and more west-northwest track. If the system were to stay over water, it could eventually develop and move toward the Yucatan Peninsula by the end of the week.