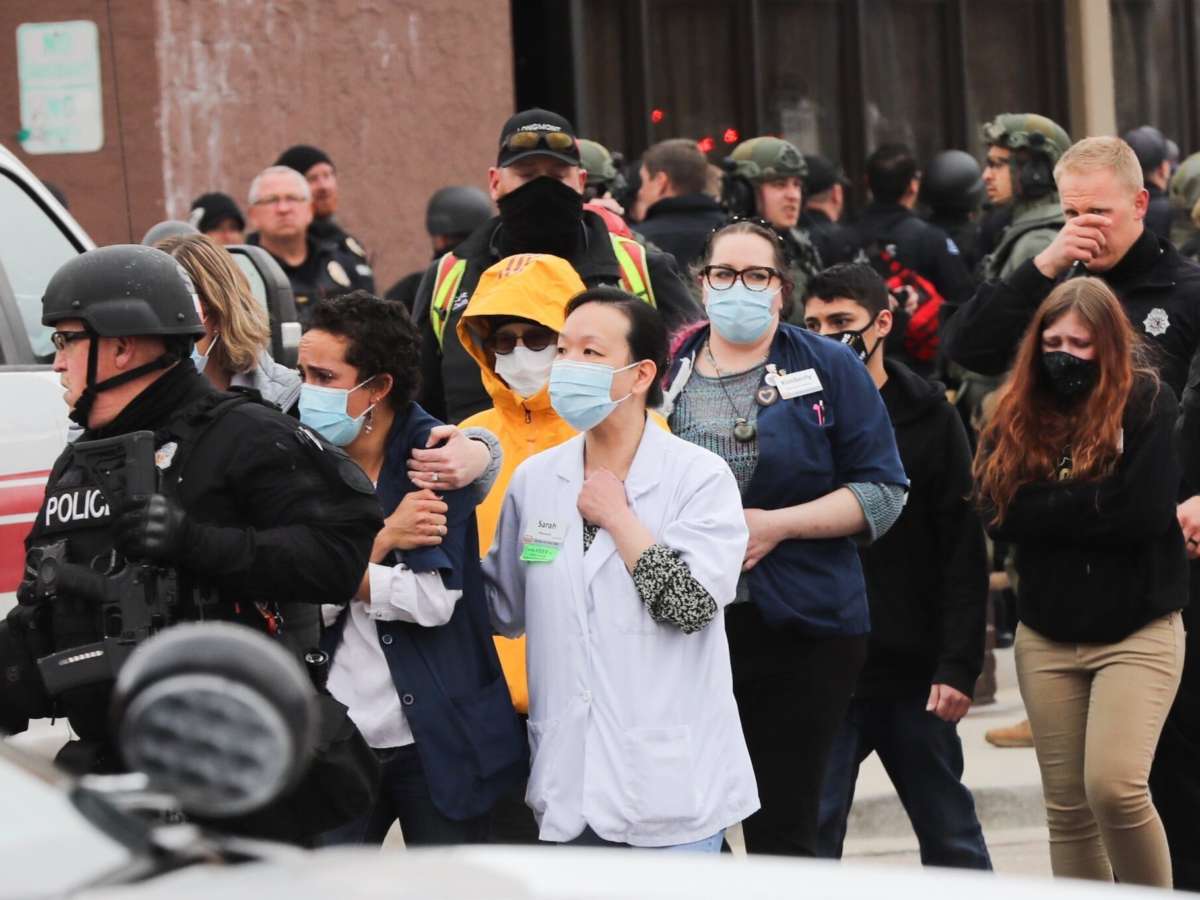 Shoppers who were trapped inside the store during a mass shooting are escorted out.
Image credit: Hart W. Van Denburg

Ten people were killed by a gunman in Boulder, Colo., during a mass shooting at a grocery store that left a trail of dead bodies, including one police officer, officials announced on Monday evening.

Law enforcement personnel said Monday police had the suspect in custody and there was no further danger to the public. By 1 a.m. MT Tuesday, police still had not released the suspect’s name.

Boulder Police Chief Maris Herold identified the officer killed during the shooting at King Sooper’s grocery store as Eric Talley. She said Talley had been on the force since 2010.

Herold called Talley a hero and said the 51-year-old was the first officer to arrive at the scene after receiving calls of a “possible person with a patrol rifle.”

The investigation into the shooting is expected to last a minimum of five days, according to Herold.

“I am so sorry about the loss of officer Talley. … We will be working night and day,” Herold said. “I know there are people out there waiting for an answer.”

She did not release the names of the other nine victims, saying the department “will try to ID all of the victims as promptly as possible.”

Boulder Police Department issued a call to the public to submit any tips, videos, or photos from the shooting to aid in the investigation.

King Soopers/City Market is Colorado’s largest grocery chain with 143 stores in Colorado, Utah, New Mexico and Wyoming. It’s owned by Kroger’s and its division headquarters is in Denver.

Early witness accounts to local media highlight the sheer confusion and fear that erupted in and outside of the grocery store as the shooting began.

Witnesses on the scene who spoke to Fox 31 News in Denver said it was unclear, at first, where the shots were coming from.

Boulder Police Department officials alerted the public to an “active shooter” situation at 2:49 p.m. local time, warning the public to stay away from the area.

One man told the CBS affiliate in Denver that his grandchildren and son-in-law were at the store’s pharmacy when the shooter arrived.

“I got the call from my daughter that my grandchildren and my son-in-law walked into the pharmacy for him to get a COVID-19 shot, and the shooter came in, shot the woman in front of them, they ran upstairs and have been hiding in a coat closet for the last hour,” said Steven who talked to CBS4’s Conor McCue. No last game was given.

Ryan Borowski told Colorado Public Radio that he doesn’t normally shop at the Boulder King Soopers. On Monday, he stopped at the store to grab snacks when the shooting happened.

He thought the gunfire was the sound of an employee who had dropped something, but he quickly realized what was happening. He, and other customers, ran to the back of the store where employees helped them escape to safety through the loading dock.

“Everybody kind of had like a hand on another person, you know,” Borowski said. “Somebody had their hand on my back, I had my hand on someone else’s back and we just kept moving.”

ABC reported that “officers responded to a report of someone shot in the parking area, and when they arrived at the scene, a suspect opened fire on them.”

“The entire building is surrounded. You need to surrender,” Boulder Police announced from the parking lot of the grocery store, where many of the store’s windows had been shattered.

“Come out with your hands up, unarmed,” they ordered.

By about 4:15 p.m. officers had cleared out the supermarket and the customers who had been inside for the entire ordeal were escorted out.

Law enforcement officials lauded the swift response by several area emergency responders who arrived minutes after the first 911 calls. A swarm of Boulder Police, SWAT and other local and federal law enforcement officers, including the FBI and ATF, swiftly contained the incident, according to police.

Boulder District Attorney Michael Dougherty told reporters Monday, without revealing the suspect’s name, that the shooter “was injured and is being treated for their injuries.”

Cmdr. Kerry Yamaguchi stated that the only person who suffered serious injuries is the suspected shooter.

Media outlets captured footage of a shirtless man as he was calmly walked out of the King Soopers grocery store in handcuffs. His right leg — from his knee down to his foot — was covered in what looked like blood. He was taken away in an ambulance.

Police set up a reunification center at University of Colorado’s Event Center for family members looking for unaccounted or missing relatives. Police organized busses to escort customers and workers who were at the store to the center.

Videos shared online show a long procession of dozens of police cars from Boulder and other local police departments escorting the body of Officer Talley to the coroner’s office.

Officers and other emergency responders stood along the route saluting as the car carrying his body passed by.

The police department Talley worked for shared a photo of the officer on Twitter Monday night. “Rest In peace Officer Eric Talley. Your service will never be forgotten #BoulderShooting,” they wrote.

Colorado Gov. Jared Polis reacted to news of the incident throughout the afternoon and evening Monday on Twitter.

In an emotional note shared Monday night, he wrote: “Tonight, the families of these victims, our fellow Coloradans, my neighbors, are hearing the devastating news that their loved one who simply woke up and went to work this morning, or who ran out to pick up eggs, won’t be coming home.”

He went on to lament such a tragic event especially after a year filled with loss and death due to the coronavirus pandemic. He went on to write, “As spring sprung this weekend, and vaccines continue to get into arms, lightness creeped back in only for the darkness to descend on us again today.”

White House Press Secretary Jen Psaki said Monday that President Biden had been briefed on the shooting in Colorado and he will be kept up to date by his team as there are additional developments.

The shooting in Colorado comes less than a week after a series of shootings in the Atlanta area, where eight people were killed by a white gunman, including six women of Asian descent.

That shooting has devastated Asian and Asian American communities across the country amid rising crimes against those groups.

The shooting in Boulder has sparked memories of, and comparisons to, several mass shootings that have occurred in Colorado in recent years.

Two years ago, two students opened fire on a public charter school in Highlands Ranch, a Denver suburb. One student was killed and eight others were wounded by gunfire.

In 2015, a man attacked a Planned Parenthood clinic in Colorado Springs. Three people were killed, including a police officer. The shooter surrendered after a five-hour stand-off with police.

In 2012, a shooting in Aurora, Colo., claimed the lives of 12 people who were sitting in a crowded movie theater during a midnight screening of a Batman film.

In 1999, two students from Columbine High School in Littleton killed one teacher and 12 fellow students.