Multiple Developments Possible in the Tropics This Week 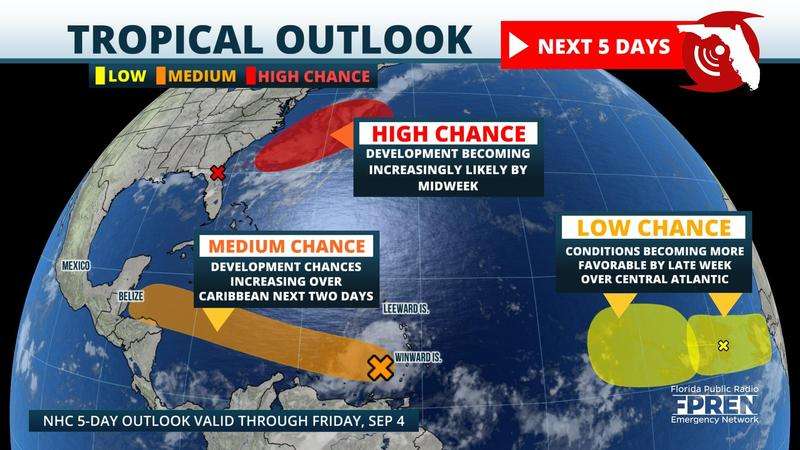 Multiple tropical waves are being monitored for possible development this week in the tropical Atlantic basin, as the traditional peak of hurricane season nears. There are no immediate threats to the Sunshine State, but residents are encouraged to stay informed of future updates all week.

A broad area of low pressure continues to deliver widespread showers and thunderstorms to the Florida Panhandle and North Florida Sunday as it moves eastward and exits into the Atlantic by early this week. This low pressure has a high chance of developing into a Tropical Depression by midweek, according to the National Hurricane Center, but it poses no risk to Florida.

This disturbance is forecast to continue north-northeast and parallel the southeast United States before the track shifts more eastward late week allowing the storm to move further out to sea. Nevertheless, showers and thunderstorms will continue to be numerous across northeastern parts of Florida and the Southeast through Monday as this system attempts to develop off the coast.

Further away from the United States, forecasters are watching three separate waves in the deep tropical Atlantic. The first tropical wave, known as Invest 99, was tracking westward away from the Lesser Antilles and further into the Caribbean Sea on Sunday morning producing heavy showers and gusty winds to parts of the Windward and Leeward Islands.

Recent satellite-derived surface winds have indicated that a broad low pressure system has formed in association with the wave over the last 24 hours. Forecasters at the National Hurricane Center issued a special advisory early Sunday afternoon increasing the chances of development from low to moderate over the next few days. Invest 99 could become a tropical depression by midweek as it nears Central America and the Yucatán.

Finally, two tropical waves located near West Africa each have a low chance of developing over the next several days. The first tropical wave has already come off of the continent and was located several hundred miles southwest of the Cabo Verde Islands on Sunday morning. Forecasters say that this system is producing limited shower activity and any further development is expected to be slow as it continues westward towards the central tropical Atlantic.

Development chances remain low over the next two days due to increased vertical wind shear near Africa but environmental conditions are expected to improve if the wave enters into the central or eastern Atlantic by late week.

The second wave by Africa has yet to emerge off the west coast of the continent. However, by midweek this wave should be located near the Cabo Verde Islands and some gradual development of this system will be possible through the end of the week as it is forecast to move generally westward over the far eastern tropical Atlantic.

September begins this Tuesday, marking the historical peak month of the Atlantic hurricane season. During an average season there are usually four named systems by the beginning of September, two of which would become hurricanes and one of which would be major (Category 3 to 5). So far, 2020 has been “normal” with regards to the number of hurricanes and major hurricanes, four and one, respectively.

However, the season has so far produced 13 named storms, more than three times the normal amount seen in an average season. The next system to develop into a Tropical Storm will be given the name “Nana”.