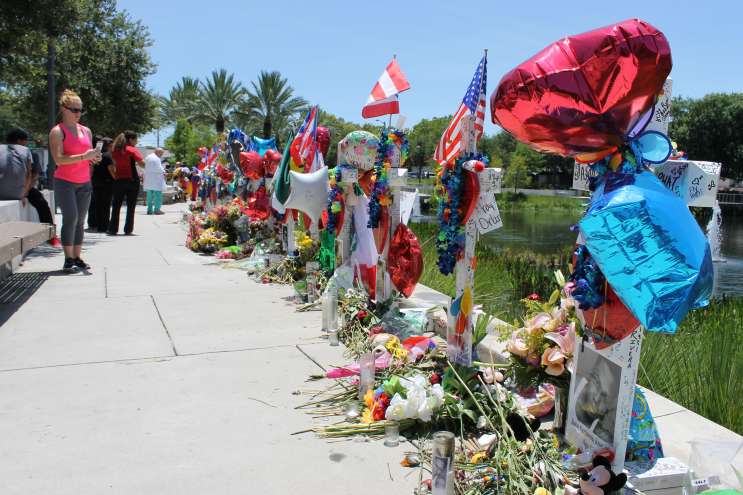 49 handmade crosses are lined up across the road from ORMC. Photo: Matthew Peddie, WMFE

Among the flowers, candles, flags and photos laid around the city of Orlando, there’s one memorial that stands out.

It’s the one in front of the Orlando Regional Medical Center, and what makes it special are the items people have traveled thousands of miles to leave behind.

Across the street from ORMC is Lake Beauty. Fountains bubble in the lake, and along the curving sidewalk are 49 wooden crosses.

Each cross has a photo of one of the victims of the Pulse shooting.

Flags flutter in the breeze- many of them Puerto Rican flags- and balloons float above the crosses, which are covered with hand written messages, like ‘gracias por venir,’ ‘just keep dancing’ and ‘fly high’. At the foot of each cross, there are piles of flowers, candles, soft toys.

There’s a constant procession of visitors, walking slowly down the line, stopping at each cross.

“I came to pay respects to six of my friends that passed away,” said Juan Carlos.

But he’s amazed at the outpouring of support for the LGBT community, and especially these crosses.

“That person’s got a great big heart, to do all this, drive all the way over here and show their support,” said Carlos.

Greg Zanis, a retired carpenter from Aurora Illinois, said it took him “three solid days” to make the crosses.

He piled the crosses into his truck and rolled into Orlando on the Thursday morning after the shooting.

Zanis started making crosses for crime and accident victims in 1996 after his father in law was murdered.

Zanis likes to put the crosses up in the night, quietly. But this memorial was different. There were so many of them that it took five hours.

The crosses are white, each with a big red heart.

One family called Zanis to tell him they can’t even see the heart any more.

“But you know the heart’s there,” said Zanis.

“What can I say, I mean it’s a compliment, right? I’m sure you saw one cross has so many flowers around you can’t see the heart.”

Each cross tells a story.

At the foot of Luis Vielma’s is a Harry Potter wand. Vielma worked as a ride attendant at Universal. Corey Connell, who wanted to be a firefighter, has an Orange County fire rescue cap on his cross.

Many of the visitors bring flowers, like Georgia Santiago.

“Me and my mom were trying to visit all of them, so we could spread flowers to remember them,” said Santiago, who was on her way to lay flowers at the nightclub and at the Dr. Phillips Center.

“It’s a lot more flowers than I thought but at the same time there were a lot of people affected by it.”

Other visitors came from further away. Gwendolyn Hall and her friends came from Georgia for a wedding in Kissimmee and decided to come see the crosses.

“My heart goes out to all the families here and I wish there was something more I can do,” said Hall.

“As a matter of fact, I’m going to find out if there’s somewhere I can donate blood, and that will make me feel like I’ve done something to help,” she said.

A line of people walked by carrying a thick, green rope on their shoulders. It was part of a one mile long lei from Hawaii, hand woven from tea-tree leaves.

They held hands, sang, then draped the lei around the ORMC sign, adding to the flags, balloons and flowers already there.

Then they placed three small leis around Kimberly ‘KJ’ Morris’s cross. Morris had recently moved to Orlando from Hawaii.

Stacey Moniz, who helped bring the Lei of Aloha to Orlando, says what happened at Pulse could have happened anywhere.

“It could have happened on Maui,” said Moniz.

“In fact a dear friend of mine’s son and his dear friend were beaten up right in Waikiki because they’re gay, and they were in a club, and people stood around and cheered. It’s horrible, it’s a hate crime,” she said.

Moniz turned to look down the long line of crosses. They could be her kids, she said. So many of them were so young.

Greg Zanis says it took him "Three solid days" to make the crosses, and five hours to put them up. Photo: Matthew Peddie.

Many of the visitors bring flowers to place at each cross. Photo: Matthew Peddie

Each cross tells a story. Luis Vielma's has a Harry Potter wand next to it. Photo: Matthew Peddie.

Part of a mile-long 'Lei of Aloha' hand woven in Hawaii is brought to the memorial. Photo: Matthew Peddie.

Volunteers brought the lei to three sites in Orlando: ORMC, Pulse and the Dr. Phillips Center for the Performing Arts. Photo: Matthew Peddie

Draping the lei around the ORMC sign. Photo: Matthew Peddie.