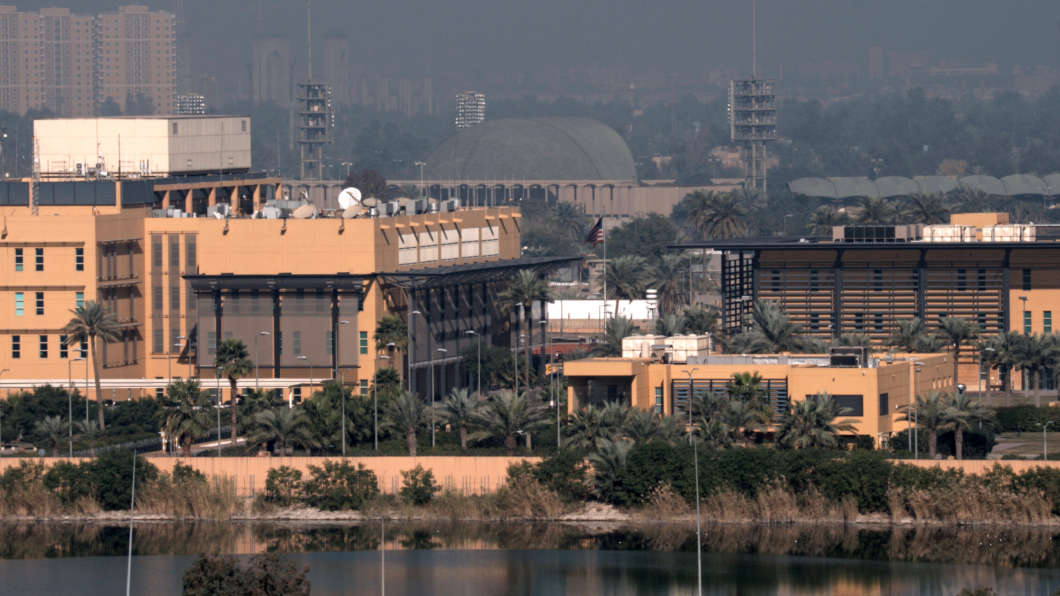 Mortars hit a restaurant in the U.S. Embassy compound in Baghdad's Green Zone on Sunday night, according to Iraqi officials. The embassy is seen here earlier this month.

A mortar attack landed a rare direct hit on the U.S. Embassy compound in Baghdad’s Green Zone on Sunday night, damaging buildings and reportedly leaving at least one person with minor injuries. Iraq’s prime minister condemned the strike, saying it could turn the country into a battlefield and complicate efforts to get the U.S. to withdraw troops from Iraq.

“I heard the explosions and then the ‘take cover’ warning — the sirens that sound from the embassy,” NPR’s Jane Arraf reports from Baghdad. She adds, “This is a fairly regular occurrence, small rocket attacks or mortars fired into the Green Zone, but they very rarely actually hit the embassy. This one did.”

While the U.S. State Department has not released details about the attack, Iraqi officials say the mortars damaged a restaurant and a gym, Arraf says. She adds that the dining area was empty at the time – and that the embassy has effectively been under lockdown conditions, with only essential staff on duty.

Initial reports said Katyusha rockets were used in the attack, raising concerns of renewed tensions between the U.S. and Iran, as Tehran-backed militias often use those weapons. But a U.S. official later said mortars were used, a detail that suggests a broader range of groups could have been involved.

Iraqi Prime Minister Adel Abdul-Mahdi urged all forces in Iraq to stop any attacks against the U.S., saying the perpetrators of such violence are “marching the country into an unimaginable consequence.”

The attack comes as the U.S. and Iran have been engaged in an escalating back-and-forth of violence: