More Violence, Arrests In Ferguson, But Most Respect Curfew 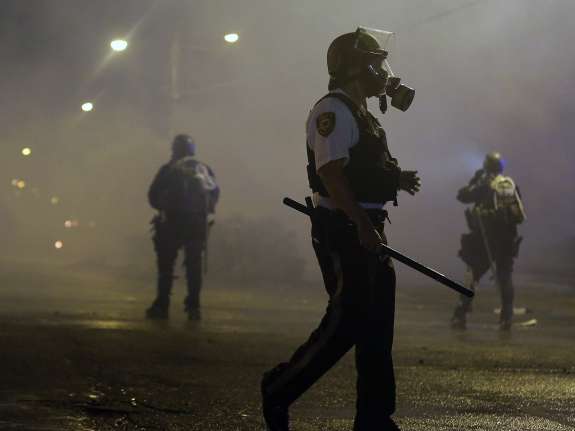 A group of protesters in Ferguson, Mo., defied the state-imposed midnight-to-5 a.m. curfew, briefly clashing with authorities this morning as anger spilled into a second week over the fatal police shooting of an unarmed black teen.

One person was also shot and critically wounded in the mayhem and a suspect was being sought, Missouri State Highway Patrol Capt. Ron Johnson said. In an early morning news conference, he said a total of seven people had been arrested overnight, all for “failure to disperse.”

St. Louis Public Radio’s Stephanie Lecci says “The violence erupted after another night of peaceful protests that turned, once [the] curfew was broken.”

Many people, she reports, resented the curfew, ordered Saturday by Gov. Jay Nixon after Friday night’s violence and looting, but most protesters did leave before it went into effect.

However, “a group of about 50 people made clear they weren’t moving – despite the pleas of organizers. By 1 a.m., the scene had turned violent,” Lecci reports.

Some of them chanted: “No justice! No curfew!”

Police confronted the protesters, who gathered in the same neighborhood where Ferguson police officer Darren Wilson shot and killed 18-year-old Michael Brown on Aug. 9. Authorities ordered the crowd to disperse and when they refused, the police fired smoke and teargas.

“Received a report that people broke into Red’s Barbecue and some were on the roof – creating a potential danger for officers trying to disperse the protesters. Police were responding to that report – not the fact that protesters were still on the street after curfew, Johnson said.

“Things got worse when a man with a handgun went into the street as police were nearing the restaurant. He ran away, but there was plenty of violence.”

The New York Times says the standoff between protesters and police began about 12:30 a.m. CT and ended about 45 minutes later.

But hundreds of protesters, such as Orie Hood of St. Louis, said she’d heed the warning to get off the streets.