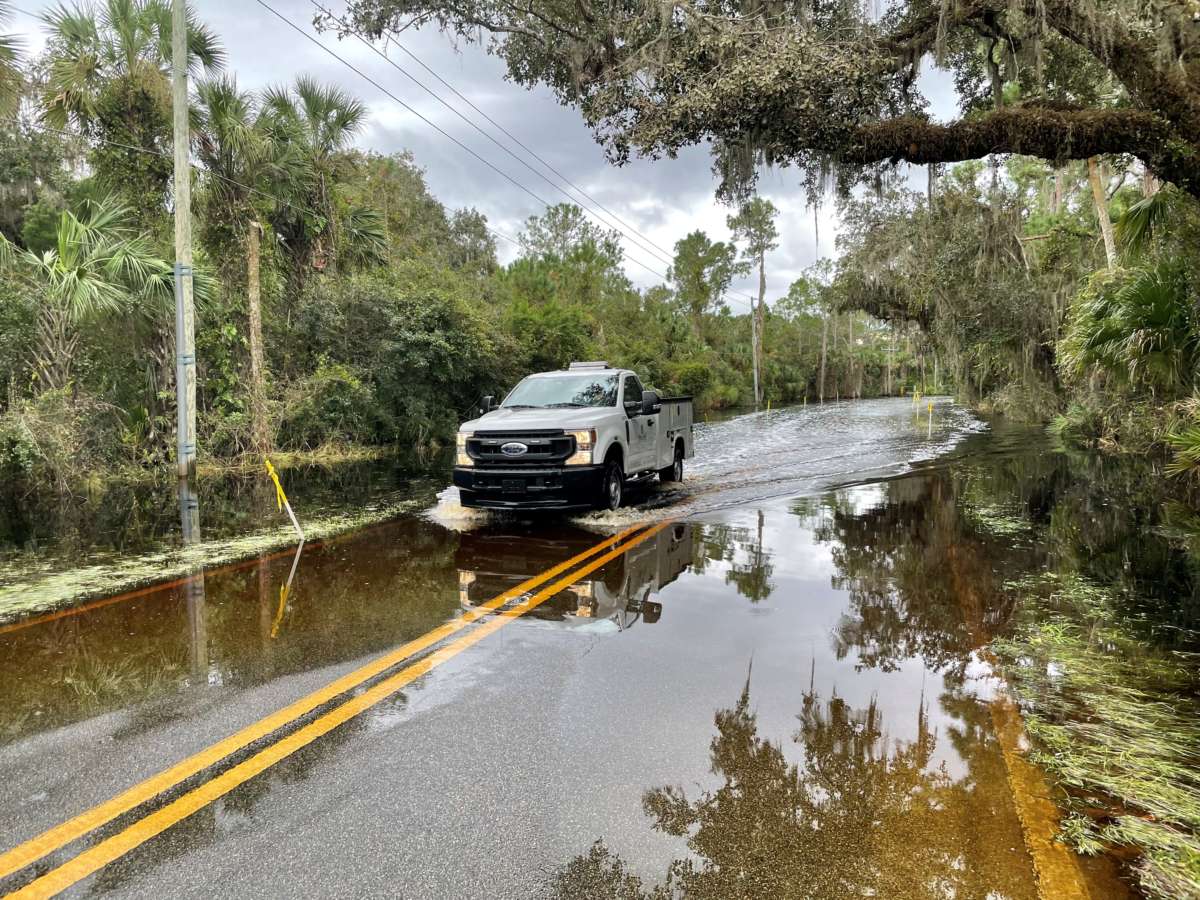 Water on the only road in and out of this central Florida neighborhood on Lake Harney left residents stranded after Hurricane Ian. Photo by Amy Green

In one neighborhood, the only road in and out remains washed out, leaving many residents stranded.

Getting to Lake Harney Woods is no easy task. The bridge here across the St. Johns River is impassable with three feet of water. To cross the river I had to drive all the way up toward New Smryna Beach and come back around on I-95.

Cindy Decker and her family picked me up outside the neighborhood on their side-by-side, a swamp buggy of sorts.

“So if we happen to pass another vehicle, pick your feet up.”

The vehicle cut a wake through the 13 to 18 inches of water on the road, the only way in and out of the neighborhood. Another vehicle would have sent another wake inside our vehicle. For Decker it was a nerve-wracking trip.

The county has stopped picking up trash from the neighborhood because of concerns about the road’s condition. Later on dry land Cindy’s daughter Dilainee said the worst part about the flooding was not being able to go to school.

“It’s kind of annoying because I don’t have too many friends out here. Except for the kids at the bus stop, and obviously the bus isn’t coming out here.”

The Decker family uses this side-by-side to get in and out of the neighborhood. Photo by Amy Green

Lake Harney Woods is a pastoral community of some 220 homes, many with a few acres and livestock like cows, horses and chickens. The community is situated on Lake Harney, which is part of the St. Johns River.

The St. Johns is the longest river in Florida. It flows north through east central Florida to Jacksonville and then out to the Atlantic Ocean. Since Hurricane Ian dumped a monumental 20 inches of rain on parts of the region, the river has remained swollen as widespread flood waters continue to drain through tributaries into the river, on their way out to sea.

St. Johns Riverkeeper Lisa Rinaman says in some places like Lake Harney Woods it could be Thanksgiving before the waters fully recede.

“The St. Johns is known as one of the laziest rivers in the country. Because it’s a long river, but it only drops in elevation that 27 feet. Most of that is in the first 100 miles.”

Residents are coping by relying on each other. John Pellerin lives with his wife on nearly six acres, where they have a horse, cows, chickens and other animals. He’s been sharing eggs with needy neighbors.

“We’ve got a neighbor out here that’s been transporting people’s cars on a car hauler trailer with his big four-by-four, in and out so they can park out on 46 so they can get to and from work.”

The cars are lined up outside the neighborhood. Residents arrange a ride across the swamped street with someone who has a vehicle that can manage the water. Then they get in their own car and go to work, but it can be a long drive because of that impassable bridge. Other residents have made a point to check on neighbors, to make sure everyone is OK.

Cindy Decker and her family have lived in the neighborhood for 26 years. The family lives on 12 acres and has chickens and goats. She says there’s been flooding before but never like this.

Since Hurricane Ian she has left the neighborhood twice. She and her husband, who both work for a contractor that installs windows and doors, have not been to work.

“It’s tough being stuck here with no place to go and nothing to do, but we do have a community here.”

They feel a little abandoned, with so much attention on southwest Florida where Hurricane Ian destroyed coastal communities. But they also feel fortunate, that their plight is not worse.