More than 1,000 invasive giant African land snails have been collected in Pasco County so far 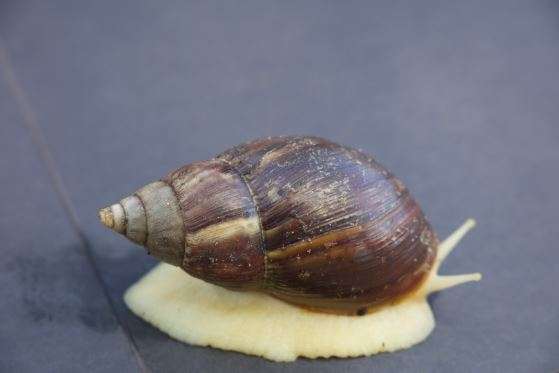 The cream-colored body of these giant African land snails found in Pasco County are unlike the ones previously eradicated from Miami-Dade County, which had dark gray-to-brown flesh. This species is commonly sold out of Europe and has been intercepted in Florida within the illegal pet trade, according to state agriculture officials. (Florida Department Of Agriculture And Consumer Services/ Courtesy)

Authorities warn people not to touch the mollusks if one is found. Instead, contact the Florida Department of Agriculture’s Division of Plant Industry Helpline at 1-888-397-1517.

Florida is again pitted in a battle with the invasive giant African land snail.

The first time was in the late 1960s, where 17,000 of the pests were collected in Miami-Dade County over seven years at a cost of $1 million.

Then, the state spent about $23 million, completing a 10-year eradication program for 170,000 giant African land snails, last year in Miami-Dade.

But now they’ve turned up about 300 miles to the northwest in Pasco County.

Officials with the Florida Department of Agriculture and Consumer Services said Thursday during a press conference that 1,016 of the destructive mollusks have been collected from 29 properties within a quarantined area of New Port Richey – that’s after they were first detected by a home gardener, two weeks ago.

State Agriculture Commissioner Nikki Fried said these GALS, as they’re called, are a “clear threat” because they consume at least 500 plant species.

“Agriculture is the backbone of Florida’s economy. And it is important to protect the vital industry from invasive pests like GALS that are recklessly brought into our state by illegal pet traders or other illegal means,” she said.

Bryan Benson, Deputy Director for the agency’s Division of Plant Industry, said one big worry is that these mollusks, which can grow up to eight inches, reproduce quickly.

“If they were established, your agricultural crops would fail. Snails would consume them as they were growing,” he said.

They also feast on… houses.

“They crawl up the sides of houses absorbing calcium out of the stucco. And leaving fecal matter under the eaves,” Benson said.

To top it all off, the snails can also carry rat lung worm, which can cause meningitis in people. Although agriculture officials said they have not yet detected rat lung worm from the mollusks collected so far.

It’s not clear how these snails entered Florida again, but their body color might provide a clue. These particular mollusks have a creamy-white flesh, compared to the previous snails, which were dark gray-to-brown.

“This cream-colored phenotype is very common in the pet trade in Europe, and has been intercepted here in Florida previously with the illegal pet trade,” said Greg Hodges, DPI Assistant Director.

It’s against the law to import or possess these snails in the U.S. without a permit.

“They are intercepted throughout the country. I mean, all major ports coming in from other parts of the world,” he said. “I’ve seen photos of them from Atlanta, New York, West Coast ports… usually intercepted on passengers.”

The quarantine in Pasco County will last about three years, according to Benson.

Labrador retrievers trained to sniff out the snails are hot on their trails, and snail bait is being laid. Some of the mollusks are collected in buckets and euthanized for further study.