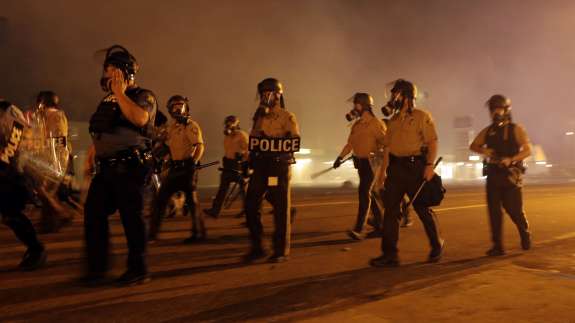 As night fell Sunday in Ferguson, another peaceful protest quickly deteriorated after marchers pushed toward one end of a street. Police attempted to push them back by firing tear gas.
Image credit: Charlie Riedel

Violence flared several hours before a midnight curfew was set to begin in the St. Louis-area town of Ferguson Sunday, with police using tear gas and smoke to disperse protesters, turning off street lights and reportedly threatening journalists with arrest if they didn’t clear the roads.

Demonstrators began marching down the W. Florissant Ave. around 8:30 p.m. CT but came into contact with a police line, which seems to have kicked off the dramatic clashes that unfolded.

The fast-moving situation was intensified with fireworks that were confused as gunshots, and what some witnesses say was actual exchanges of gunshots. It’s unclear who was doing the firing. A number of locals have told NPR that they’re increasingly frustrated that Ferguson residents are being represented by small handfuls of looters and rioters, who they suspect are from out of town.

Three hours after the scuffles began, just before the midnight curfew imposed on Saturday by Gov. Jay Nixon, streets fell calmer, but the area remains on a hair trigger.

The chaos after dusk came after a unity rally that drew thousands of community members on Sunday afternoon. But as Ferguson community members returned home, Missouri Highway patrolmen began barricading streets around what has become the central gathering place for nightly protests and daily marches — a burned out Quiktrip station at the intersection of W. Florissant Ave. and Canfield Dr. in Ferguson.

Just as crowds on Ferguson streets were breaking up, new information surfaced about the killing that sparked days of unrest. The New York Times posted results from a private autopsy of Michael Brown, showing he was shot six times, twice in the head.