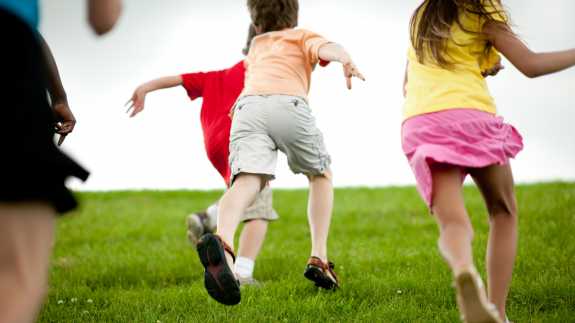 Good for bodies and good for brains, the scientists say.

As schools cut down on physical education and recess, kids are spending more time than ever in a desk. And while nerdy second-graders like me didn’t ever consider arguing for more gym, there’s increasing evidence that being active helps not just children’s waistlines but their brains.

“If you consider the anthropology of humankind, we were designed to move,” Charles Hillman, a professor of kinesiology at the University of Illinois at Urbana-Champaign tells Shots.

Hillman and colleagues have added more evidence as to how activity helps kids. His study, published Monday in Pediatrics, shows 7- to 9-year-old children who run around and play like, well, children, for at least 70 minutes a day show improved thinking skills, particularly in multitasking, compared to children who aren’t as active.

The researchers looked at a nine-month after-school program, called Fitness Improves Thinking in Kids (FITKids) at the University of Illinois. The 109 students met after school nearly every day for a snack and a quick lesson on fitness and nutrition. Most importantly, the children spent 70 minutes running around and playing tag, soccer, jump rope and other games. The focus was not on competition, but playing like kids normally do.

“Kids tend to move and get their exercise intermittently,” says Hillman. “They don’t go out and run four miles” like an adult might.”

In one multitasking test, children were shown a character on the screen and indicated with a thumb press whether the character was a certain color and a certain shape. The kids who had participated in FITKids were significantly faster and more accurate at identifying the color and shape than children who weren’t exercising.

Scans of the FITKids children’s brains showed increased brain activity during the task, in a network known to correspond to paying attention. Interestingly, the changes in brain activity correlated to the amount of time kids spent in FITKids. The more times they attended, the greater the change.

The researchers also looked at the children’s ability to selectively focus attention and resist distraction, but did not find as strong an association with physical activity.

Other scientists say this is yet more evidence that physical activity improves school performance. “It might actually help,” says Catherine Davis, a professor of pediatrics at Georgia Regents University. “I think that parents need to go to the educators and say, ‘Why is my child sitting down for six hours a day when he’s a 7-year-old boy and he needs to move?’ ”