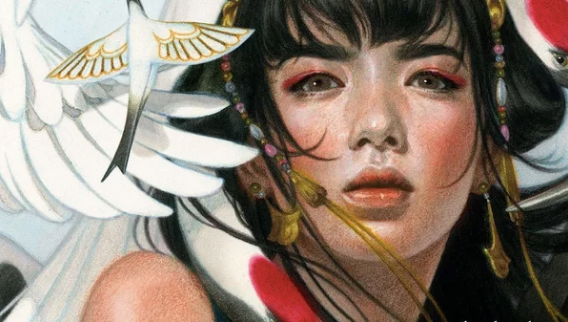 Folkloric family magic and monstrous mothers tie together these two July releases, though their tones could not be more different.

Six Crimson Cranes is a reimagining of a classic if lesser-known fairy tale, The Six Swans. I’m most familiar with the version recorded by the Brothers’ Grimm, though there are many variants, and Elizabeth Lim has taken the source material and turned it into something much more nuanced and compassionate than the original tale.

Shiori is a classic rebellious princess who prefers sampling delicious treats from the kitchen and playing games with her brothers to fulfilling royal duties — especially her duty to marry some noble lord she’s never even met. When she inadvertently discovers she can do forbidden magic by bringing a paper crane to life and befriending a dragon, she wonders if perhaps she can alter her fate. But her evil stepmother discovers her secret and curses both her and her brothers. Shiori must wander the land with her face hidden, alone and silent, while her brothers live as six cranes.

The only way Shiori can save her brothers and restore her voice is to spin a net out of magic nettles and use it to capture her stepmother and steal the corrupted dragon pearl that fuels her magic. But it won’t be easy to do, especially once she is captured and taken to her fiance’s fortress. As Shiori desperately tries to spin the net that will save her family, it’s she herself who gets further and further tangled up.

“The Six Swans” has long been one of my favorite fairy tales, and Lim’s rendition does not disappoint. Much like her debut novel, Spin the Dawn, Six Crimson Cranes feels like the sort of fantasy I loved when I was a teen, with its impulsive princess protagonist and her animal sidekick and quippy dragon friend. This takes all the tropes — the princess in disguise as a kitchen wench, the enchanted brothers, the kindly prince — and twists them just enough to make them fresh.

Perhaps most interesting of all is the question of the evil stepmother. From the start, it seems that she is evil through and through with her serpent minions and coldness towards Shiori, but as the story progresses, we learn that it wasn’t always thus, and that the relationship between the two has changed over time. That shift turns out to be crucial to the plot and the breaking of the curse, and it’s only through understanding her stepmother that Shiori can save her family.

Understanding your mother is also key in Erica Waters’ The River Has Teeth.

Della has it rough. For generations, her family has been linked to the magic of the Bend. They’re hedge witches, who can pull power from the land to cure the petty ails of the local community. But something has gone wrong with the magic, corrupting it. Della’s mother has gone mad from it and has turned into a monster. Della tries her best to keep her locked up, but girls have been going missing in the Bend, and Della is afraid she knows all too well who is responsible.

Natasha hasn’t spent much time thinking about the Bend. But now her sister is missing, and she suspects foul play, and that’s where all the clues point. But the police won’t listen to her, so she turns to a girl who everyone says is a witch and asks her for help finding her lost sister.

With little between them besides animosity and lies, it doesn’t seem likely Della and Natasha will become friends … let alone something more than friends. And yet, the mysteries of the Bend seem to be pushing them closer and closer, almost as if it wants them to unlock the secret of the corruption at its heart.

The River Has Teeth is a backwoods murder ballad of a book that draws from the old songs and legends that underpin so many areas of rural America. Its girls are rough around the edges, products of fractured families that should have done better by them and tougher than they should have to be. It’s impossible not to root for the love they find in each other, even as their own lies and shortcomings jeopardize it.

It also does something of a folklore magic trick. At first, we think it’s the kind of song that features cruel mothers and bad sisters. But then it twists, and we suddenly see that it’s another sort of ballad altogether — albeit still one that’s full of murder. It’s well worth a listen.

Caitlyn Paxson is a writer and performer. She is a regular reviewer for NPR Books and Quill & Quire.