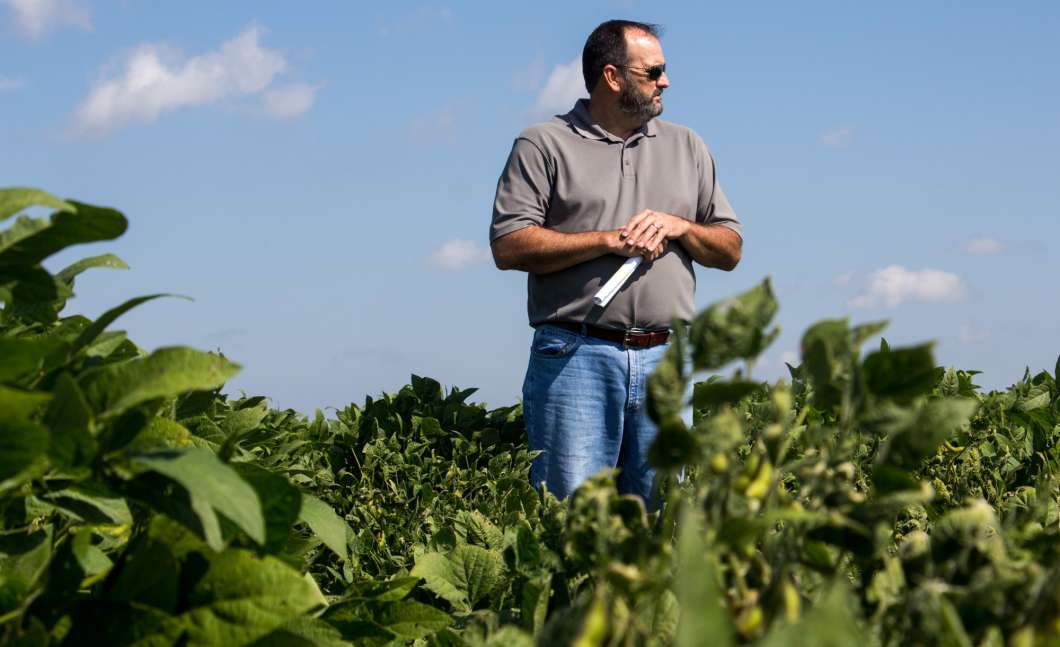 Bob Scott, an expert on weeds with the University of Arkansas, in a research plot where soybeans were exposed to dicamba vapor.

In a normal year, Kevin Bradley, a professor of weed science at the University of Missouri, would have spent his summer testing new ways to control a troublesome little plant called water hemp.

This has not been a normal year.

“I don’t even talk about weed management anymore,” Bradley tells me, and he sounds disgusted. “Nobody calls me and ask me those questions. I barely have time to even work with my graduate students. Everything is about dicamba. Every single day.”

Dicamba, an old weedkiller that’s now being used in new ways, has thrust Bradley and half a dozen other university weed scientists into the unfamiliar role of whistleblower, confronting what they believe are misleading and scientifically unfounded claims by one of the country’s biggest seed and pesticide companies: Monsanto.

“It’s not comfortable. I’m like anybody else, I don’t like [it when] people are unhappy with me,” says Mike Owen, a weed specialist at Iowa State University. Then he chuckles. “But sometimes, like John Wayne said, a man’s got to do what a man’s got to do!”

“Certainly, there’s not a weed scientist in any of these states who would back down, who would change their story,” says Aaron Hager, at the University of Illinois.

The tensions between Monsanto and the nation’s weed scientists actually began several years ago, when Monsanto first moved to make dicamba the centerpiece of a new weedkilling strategy. The company tweaked the genes in soybeans and cotton and created new genetically modified varieties of those crops that can tolerate doses of dicamba. (Normally, dicamba kills those crops.) This allowed farmers to spray the weedkiller directly on their soybean or cotton plants, killing the weeds while their crops survived.

It’s an approach that Monsanto pioneered with crops that were genetically modified to tolerate glyphosate, or Roundup. After two decades of heavy exposure to glyphosate, however, devastating weeds like Palmer amaranth, or pigweed, evolved resistance to it. Farmers are looking for new weedkilling tools.

Dicamba, however, has a well-known defect. It’s volatile; it tends to evaporate from the soil or vegetation where it’s been sprayed, creating a cloud of plant-killing vapor that can spread in unpredictable directions. It happens more in hot weather, and Monsanto’s new strategy inevitably would mean spraying dicamba in the heat of summer.

Monsanto and two other chemical companies, BASF and DuPont, announced that they had solved this problem with new “low-volatility” formulations of dicamba that don’t evaporate so easily. Yet the companies — especially Monsanto — made it difficult for university scientists to verify those claims with independent tests before the products were released commercially.

“I wish we could have done more testing. We’ve been asking to do more testing for several years, but the product was not made available to us,” says Bob Scott, a weed scientist at the University of Arkansas. “These are proprietary products. Until they release those formulations for testing, we’re not allowed to [test them].”

To make matters worse, Monsanto started selling its new dicamba-tolerant soybeans in 2016, before the new low-volatility formulations of dicamba were even approved for sale. It tempted farmers to use older versions of dicamba on these crops, illegally, and some farmers couldn’t resist that temptation. In Arkansas, there were widespread reports that dicamba was damaging neighboring fields that didn’t have the benefit of Monsanto’s new genes. In one case, a dispute between farmers led to a fatal shooting.

That fall, at a meeting of weed scientists, Hager confronted Monsanto’s representatives. According to Hager, he told the company that “you knowingly released these varieties in an area of the U.S. where you knew that glyphosate resistance [in weeds] was rampant. When you did that … you knew what was going to happen!”

“I got a blank stare,” Hager recalls.

This past summer, the floodgates on dicamba use opened. The new formulations of dicamba were approved for use (although Arkansas only allowed farmers to use BASF’s product, not Monsanto’s) and farmers rushed to adopt the new technology. They planted dicamba-tolerant crops on 26 million acres.

“The demand for it is overwhelming. The need to control these difficult-to-manage weeds is huge,” says Scott Partridge, Monsanto’s Vice President of Global Strategy.

When spraying started, complaints rolled in. The new “low volatility” versions of dicamba didn’t stay where they belonged. They drifted into nearby fields, damaging crops there — mostly soybeans, but also vegetables and orchards. There were reports of damage from Mississippi to Minnesota, but the problem was worst in Arkansas, Missouri and Tennessee.

“By the end of May, first of June, it became impossible; the calls were coming in, three or four a day. Sometimes eight or 12 a day,” says the University of Arkansas’ Scott. “There is no precedent for what we’ve seen this year.”

At first, the companies selling these herbicides — both Monsanto and BASF — seemed unconcerned.

“All I got was denial that there was a problem,” Bradley says. “What I kept hearing was, it’s not a big problem nationwide; we always have these kinds of mistakes or accidents with the introduction of any new technology.”

So Bradley, a past president of the Weed Science Society of America, started collecting data on crop damage from across the country, mapping the epidemic. By the end of the summer, Bradley estimated that at least 3.1 million acres of crops had shown some injury from drifting dicamba.

With the scale of dicamba damage increasingly clear, a fierce debate erupted over its cause.

Monsanto’s executives insist that it’s because the people who sprayed dicamba were just learning how to do it properly, and didn’t follow directions. Scott Partridge says his company checked out more than a thousand cases of dicamba damage, “and in 88 percent of those instances, the label was not followed.” Farmers or pesticide applicators sprayed dicamba too close to neighboring fields, didn’t clean out their equipment properly, or used the wrong nozzles.

“Every one of those [mistakes] is fixable by education,” Partridge says.

University weed scientists say that’s only part of the explanation, and the problem can’t be fixed so easily.

Bradley, Scott and their colleagues in other states say that much of the damage they saw this year didn’t appear to come from “physical drift” of windblown droplets of dicamba, coming directly from a sprayer. Physical drift, they say, typically produces a plume of damage that diminishes with distance from the source of the spray. Instead, they saw entire hundred-acre fields of soybeans with cupped leaves, and the damage was uniform from one end to the other. They also saw damage in orchards and fields that were far removed from any fields sprayed with dicamba.

This pattern, they say, looks more like what they’d feared all along: volatilization.

What’s more, the scientists say, field experiments that they finally carried out this summer point toward evaporating dicamba as a cause.

Bob Scott shows me one such experiment, a field of soybeans at a research station near Lonoke, Ark. Here, soybeans were injured by dicamba that definitely did not enter the field through mistakes in spraying.

“It’s important to remember, we did not spray this plot,” Soott says. Instead, at a location far away from this field, he and his colleagues sprayed trays of soil with various dicamba-containing herbicides. Then they carried the trays into this field and placed them between the rows of soybeans for 48 hours. The trays and soybeans were protected underneath plastic hoops — essentially, miniature greenhouses — that were open at each end. The dicamba evaporated from the trays and injured the soybean plants nearby, curling their leaves and stunting their growth.

These observations have huge implications. If the new formulations of dicamba evaporate and spread, they cannot easily be controlled.

“If this were any other product, I feel like it would be just pulled off the market, and we’d be done with it,” Scott says.

But dicamba, and the crops created to tolerate it, aren’t just any products. There’s big money behind them. Monsanto, seed dealers, farmers who are struggling with weed problems — they all have a stake in this technology. The university scientists who are pointing out problems with them are confronting an economic juggernaut.

Monsanto — and farmers who want to use dicamba — have been fighting back. In Arkansas, where state regulators proposed a ban on dicamba during the growing season next year, Monsanto recently sued the regulators, arguing that the ban was based on “unsubstantiated theories regarding product volatility that are contradicted by science.” The company called on regulators to disregard information from Jason Norsworthy, one of the University of Arkansas’ weed researchers, because he’d recommended that farmers use a non-dicamba alternative from a rival company. Monsanto also attacked the objectivity of Ford Baldwin, a former university weed scientist who now works as a consultant to farmers and herbicide companies.

“I read it as an attack on all of us, and anybody who dares to [gather] outside data,” Bob Scott says. “And some of my fellow weed scientists read it that way as well.”

Kevin Bradley, at the University of Missouri, says executives from Monsanto have made repeated calls to his supervisors. “What the exact nature of those calls [was], I’m not real sure,” Bradley says. “But I’m pretty sure it has something to do with not being happy with what I’m saying.”

I contacted three academic deans at the University of Missouri, asking for details about the calls. A university spokesman said they were too busy to respond. Monsanto’s Scott Partridge, for his part, says that “we are not attacking Dr. Bradley. We respect him, his position, opinion, and his work. We respect him, and academics in general.”

Bradley says criticism from people in Missouri’s farming community whom he’s known for years hits him even harder. “To have somebody say that what [I’m] saying is bad for Missouri agriculture, that’s a hard one to take,” he says. “There’s not a lot of glory in these positions, or major financial incentive. We chose these jobs to help the farmers in our states.”

Monsanto’s explanation for what happened this summer, and how to prevent it, seems to be carrying the day in Washington, D.C. Two weeks ago, the Environmental Protection Agency announced that it will allow continued use of dicamba next year. The EPA is imposing a few additional restrictions on who can spray it, and when. Those restrictions will have little effect, or none at all, on damage caused by volatilization.

Arkansas’ proposal to ban use of dicamba during the growing season next summer has not yet received final approval. A public hearing on the proposal is set for Nov. 8.

Kevin Bradley thinks there’s one positive result from the controversy. “It has made more farmers aware of what we do, and that is, unbiased research and calling it like we see it,” he says.

Over the course of recent decades, publicly funded agricultural extension services have shrunk, and farmers have turned to seed and chemical companies for advice. “It’s become so weighted towards — well, the companies did their research, and it said this, so that must be the way it is!” Bradley says. “You know what? Maybe that’s not the way it is.”