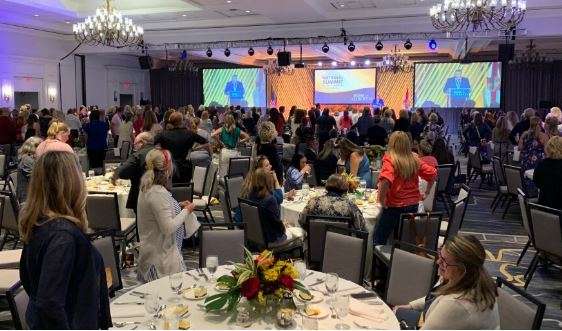 Organizers say the event was sold out, with 500 in attendance (Kerry Sheridan/ WUSF)

The group held its first national summit July 15-17 in Tampa, where members were trained by the conservative Leadership Institute in how to challenge bureaucracies and run for office.

Describing themselves as “war moms,” and “joyful warriors” tasked with fighting for the soul of America, several hundred members of Moms For Liberty convened in Tampa over the weekend for the group’s first annual summit, highlighted by Republican speakers like Governor Ron DeSantis, Senator Rick Scott and Betsy DeVos, and punctuated with a series of conservative-led strategy sessions on how to win political office and navigate school bureaucracies.

Known largely for speaking out against mask mandates in the pandemic, demanding access to school curricula, rooting out offensive or explicit content in literature and voicing their suspicions about the pervasiveness of “woke ideology” at school board meetings across the country, members of Moms For Liberty said they now hope to expand their political influence and the scope of parental rights laws, which exist in about one third of states.

At the opening session inside the Tampa Marriott on Friday, co-founder Tiffany Justice proclaimed “2022 is the year of the parent, and moms and dads are the true political party in America aren’t we?”

She and co-founder Tina Descovich presented DeSantis, the keynote speaker, with a sword known as a Rudis, meant to represent the wooden type given to gladiators after a battle for freedom, for the governor’s work enshrining parental rights into Florida law.

DeSantis, in turn, urged the 500 attendees to vote for conservatives in August school board races, and said he has endorsed around 25 candidates so far — even though school board races in Florida have long been considered non-partisan.

“What we are looking to do is really help candidates who are walking the walk, who have strong values who are going to be there for parents and put the students first, and shine a light on that,” DeSantis said.

The conference was heavy on conservative ideology and strategy, as speakers decried the teaching of critical race theory, allegedly lax punishment policies for misbehaving students, advocacy for gender and sexuality education, liberal teachers’ unions and more as reasons for the failings of public schools.

“Our adversaries, it’s not just that they don’t care about our children, I believe they’re actively trying to harm our children,” said Jeff Childers, a lawyer and Christian blogger and influencer in northern Florida who spoke at the conference Friday, and whose wife is a local leader in Moms for Liberty in Alachua County.

“I look at the parents Bill of Rights, and the amendments that we’ve had since then, as a really good framework, right? That’s like the body of the AK-47,” he said.

For moms like Jennifer Dunn, whose sister is co-founder Tina Descovich, the movement began when the coronavirus pandemic arrived in 2020, and federal health officials recommended wearing face-masks to reduce the spread of the virus, which has killed more than a million people in the United States, according to the Centers for Disease Control and Prevention.

“COVID really woke me up with what was happening with my kids,” Dunn said, wiping away tears. “We were fighting masks on our children’s faces. We knew — I mean, my son within the first week of wearing one, went to school, broke out in a rash around his nose and his mouth that flared up and he had to be put on antibiotics. And I thought, this is not okay.”

Now, Dunn, who is the mother of a six- and and an eight-year-old in Brevard County, said she wants to keep apprised of what her children are learning, in advance.

“What’s important for me is, I think, curriculum next. I think that really getting in there, having access to what our kids are learning. And having a say, that’s, really important for me,” she said.

Ruth Swanson, who came to the conference from Miami, said she doesn’t have children but is active in Moms For Liberty because she’s a substitute teacher at a private school and described herself as a “concerned citizen.”

“Right now we’re tackling things like CRT (critical race theory) and parental rights in schools and having the school boards respect the rights of parents in educating their children and their involvement with their children,” Swanson said.

“A lot of what we’re dealing with right now is trying to get access to what materials they’re teaching. They don’t give a public access to curriculum and to their library books. And this is a major concern for us,” she added.

School leaders, however, say it’s been a longstanding practice that all material and standards are publicly available, a practice that DeSantis signed into law earlier this year.

Many training sessions were closed to the media on the express request of the Leadership Institute, a Moms For Liberty spokeswoman said. (Kerry Sheridan/ WUSF)

Learning how to run for office was a focus of numerous breakout sessions, with titles like “Winning By the Numbers,” “Vetting Candidates,” and “Are You Ready To Run,” led by The Leadership Institute, a multimillion dollar conservative organization based in Arlington, Virginia.

The Moms For Liberty website shows the Leadership Institute was the highest level sponsor of the event, with a $50,000 dollar donation.

“We understand the movement. We understand that it is not about political parties. It is about people like you,” grassroots director Scot Crockett told the conference, saying LI has trained a quarter of a million conservatives since being founded in 1979.

Members of the media were not allowed to observe the training sessions, and were barred from many of the other breakout sessions, on topics like “Gender Ideology” and “Behind The Education Curtain.”

Mary Byrne, a graduate student at Ohio State, said she was there to research parental rights movements, and was able to get in, as a conference attendee.

“It was a lot of talking about local school board elections, and a lot of people talking about how they’ve been frustrated, because maybe they’re the only one who is on the school board and they’re outnumbered by liberals or people who don’t care,” Byrne said.

Byrne added that “one thing I thought was interesting was that there was also a focus on bringing more diversity into the movement. So there was like, a recognition that the conference and like the movement as a whole aren’t very diverse. And a focus on trying to reach out to specifically immigrant parents, who might also have a more conservative ideology.”

Nicole Smyth, a mom from South Carolina, said she believes the Leadership Institute trainings are transforming the movement by providing an understanding of how to navigate -– and influence -– bureaucracies.

“I think we’re shifting where a lot more people are like, we’re not just going to speak out, we’re gonna have facts to back it up. And that is really helping us. And I’m hoping as time goes on, more and more parents start realizing that’s why Moms For Liberty is so great. And that’s training so great, because it’s teaching us more,” Smyth said.

“I have two little girls, but I choose to homeschool them. And some people are like, ‘why are you in Moms For Liberty?’ But they forget that we fight for the parental rights too. And I’ll be honest with you, what I see going on in public school system, as a homeschooling mom, I’m concerned that with the mass exodus that kind of took place during 2020, that the government’s going to start shifting gears and kind of looking at us. And I believe for us to be proactive and reactive. So I want to keep those parental rights in place in South Carolina,” she said.

But some fear that the goal of the powerful conservative interests that back Moms For Liberty is to dismantle public education.

“The last few years have been particularly hard, there’s discontent out there. But this discontent is being exploited by people who don’t want to solve problems, they want to destroy public education. And if you destroy public education, you you’ve really undermined democracy and left this nation very vulnerable,” said Maurice Cunningham, the author of Dark Money and the Politics of School Privatization.

Little is known about where Moms For Liberty gets its funding, having just formed in 2021 as a tax-exempt social welfare organization known as a 501c4, he added.

“You can take in unlimited monthly amounts of money as a C4 and you can expend unlimited sums of money. And you can do this without ever revealing who the true check writers are. So this is like an enormous wrapped gift with a big bow to the wealthiest Americans to influence politics and hide their identities,” Cunningham said.

Melissa McFadden, attending the conference from South Carolina, said she has six children, five of them school-age and in public schools. She said her Moms For Liberty chapter requires her to watch or attend one school board meeting a month, and she plans to run for state elected office.

“We can’t abandon the public schools. I mean, taking my kids out is not going to change things. It is not. Like, I have stay there and fight and try to help these people come back to some kind of reality,” McFadden said.

While some attendees, like McFadden, said their aim was to save public education, the reaction of the crowd was telling when Betsy DeVos, who served as education secretary under former president Donald Trump, talked about her vision at an lunchtime session Saturday.

“I personally think the Department of Education should not exist,” DeVos said.

She got a standing ovation.