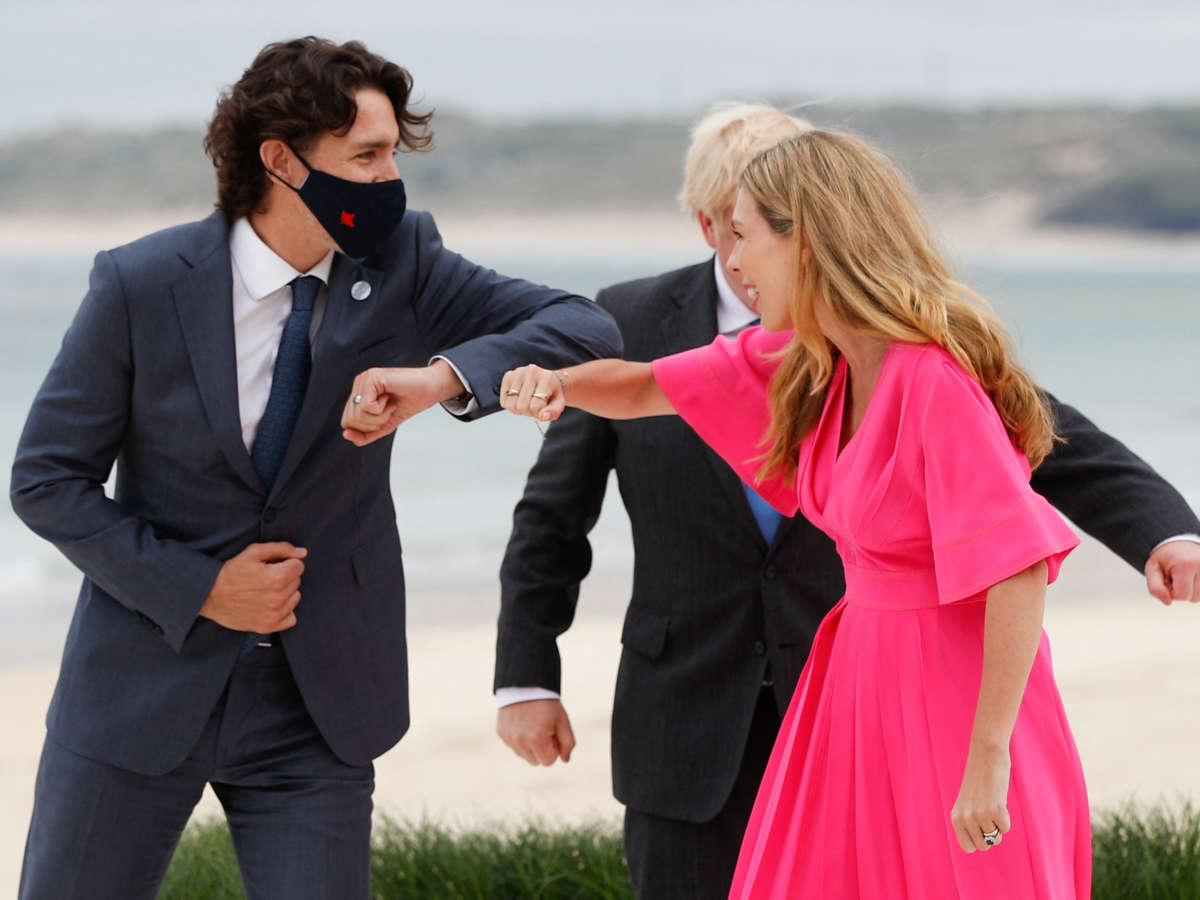 For the first time since the pandemic halted face-to-face events, leaders from Canada, France, Germany, Italy, Japan, the United Kingdom and the United States have gathered for three days of talks in a British seaside town to try to address some of the world’s most pressing issues.

Stopping the coronavirus pandemic will be front and center in the talks. But the summit also provides a window into the dynamics between the world leaders beyond their statements and press conferences.

Here’s a look at some of the moments you may have missed on Day 1:

For the first time, Queen Elizabeth II and her family are participating in the G7, part of a diplomatic charm offensive. Along with Prince Charles, the Duchess of Cornwall, and the Duke and Duchess of Cambridge, the Queen attended a reception with G-7 leaders and their spouses Friday evening at the Eden Project, which describes itself as the worlds largest indoor rainforest.

The Queen and other senior members of the Royal Family arrive to host the G7 leaders’ reception at the Eden Project.

“Are you supposed to be looking as if you’re enjoying this?” the Queen asked British Prime Minister Boris Johnson as they settled in for a group photograph, prompting chuckles from the other leaders.

Prince Charles spoke to the leaders, applauding them for their urgent work. “Ladies and gentlemen, we are doing it for the pandemic. So, if you don’t mind me saying so, we must also do it for the planet,” he said.

Most important meal of the day

“Multilateralism is back @G7,” tweeted Charles Michel, president of the European Council, alongside a photo of leaders gathered together for what appeared to be breakfast ahead of the day’s talks. French President Emmanuel Macron also shared a photo of the gathering via Twitter.

“The EU wants to make sure the world is vaccinated as quickly as possible. Only together can we do this by upholding our values,” Michel wrote and included the hashtag “BuildBackBetter,” a phrase that G-7 host Johnson has adopted and that President Biden campaigned with to describe his agenda to “rescue, recover and rebuild” after the pandemic.

Multilateralism is back at @G7

The EU wants to make sure the world is vaccinated as quickly as possible.

Only together can we do this by upholding our values. #BuildBackBetter pic.twitter.com/GK7219CHcn

On Thursday, Biden announced the U.S. will donate 500 million doses of the Pfizer vaccine to nearly 100 countries struggling to afford them. G-7 leaders are expected to announce on Day 1 of the talks a commitment to share 1 billion of their COVID-19 vaccine resources with lower income countries.

Handshakes out, elbow greetings in

At the start of the summit Friday, the world leaders and their spouses walked up a pier one at a time to get a photo with Johnson and his wife, Carrie.

Exaggerated elbow bumps as a safety measure replaced the traditional handshakes between leaders.

“Everybody in the water,” Biden quipped to the pool of photographers.

As is customary, the leaders gathered for an official photo before the start of the talks.

It didn’t take long before the moment became a meme.

Harry and Meghan’s newborn gets a mention

On Friday, Catherine, Duchess of Cambridge, and first lady Jill Biden toured a classroom at Connor Downs Academy and held a roundtable on early childhood education.

That provided an awkward moment.

Reporters traveling with Biden asked the former Kate Middleton if she had any wishes for her new niece, Lilibet Diana, the newborn daughter of Prince Harry and Meghan, Duchess of Sussex, who have stepped back from the British royal family in a very public way.

The baby was named in honor of Harry’s late mother, Princess Diana of Wales, and Queen Elizabeth II. The name sparked some controversy, with questions of whether the queen had given her blessing for the use of her childhood nickname.

“I wish her all the very best. I can’t wait to meet her,” the Duchess of Cambridge said. “We haven’t met her yet. I hope that will be soon.”

She was asked whether she had done FaceTime with her new niece. “No, I haven’t,” she said.

Cameras were allowed in briefly as the leaders began their formal meeting. Johnson gave some opening remarks, noting how refreshing it is to work with people in person.

As NPR’s Frank Langfitt reported, any concrete action announced during the talks on climate change could provide momentum for the U.N. Climate Change Conference this fall. Johnson is hosting that meeting in Glasgow, Scotland, too.

But he focused on COVID-19. “We need to make sure that we learn the lessons from the pandemic,” he said.

Part of Biden’s mission is to repair ties that were damaged after four years of former President Donald Trump’s more go-it-alone approach — an approach that forever changed staid international summits, as captured in this iconic photo from a G-7 in Canada:

There’s less drama at this meeting than the Trump years. Take, for instance, the unforgettable images of Trump white-knuckling leaders with handshakes and pushing aside Montenegro’s prime minister in an apparent attempt to get to the front of a photo-op.

Some leaders were happy to show themselves turning the page.

Now that we are together, united, determined to make a difference, it’s time to deliver. I’m sure we will, @JoeBiden! pic.twitter.com/VmkvCV1yG5

Compare that to the “handshake wars” between French President Emmanueal Macron and Trump during bilaterals-gone-by.