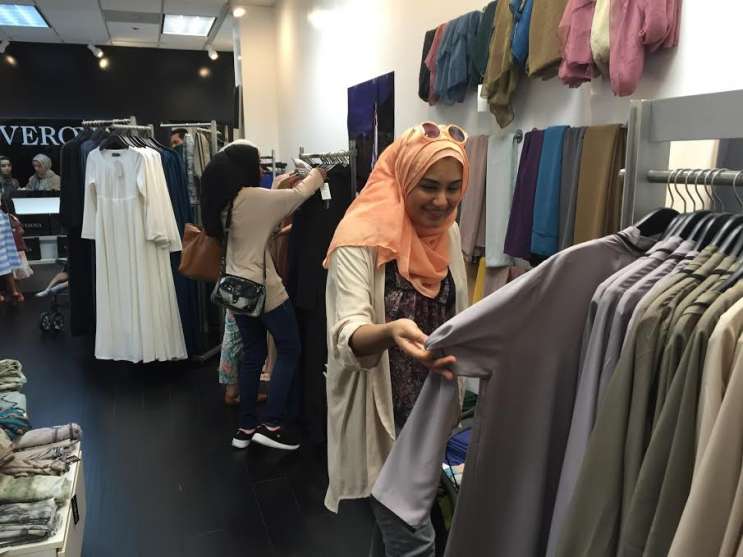 Verona is one of few US-based companies catering toward Islamic and conservative wear. Photo: Renata Sago.

The crowd outside Verona boutique is thick with women. In their hands, sleek black shopping bags. On their heads, patterned scarves called hijabs.

From a small booth a DJ spins Arabic pop that has some women nodding their heads. Others, like Maryam Khan, sit on benches taking in the scene. The 30-year-old wears a fashionable fuchsia, orange and white-striped hijab-tunic-skirt ensemble.

“This is from a company in Dubai but then you pay a lot of shipping in Dubai,” she says.

Covering up is a symbol of modesty and spiritual growth. Stylish, original, and appropriate modest clothes live online. Finding those kinds of pieces in mainstream stores takes time.

“You find something that’s armless,” Khan says. “And then we have to find a cardigan or find an under shirt that matches. Plus it’s hot outside, so to have to wear all that—it’s hard.”

The opening of a store in Orlando Fashion Square, where tops with full-length sleeves, full skirts without slits, and even active wear, are constantly in stock is a sign of progress.

Verona is a first for a mainstream mall in Florida, and one of few in the country.

Co-founder Lisa Vogl and her partners launched Verona as an online boutique.

“We started out with just one dress, two skirts and four hijabs. Now we are seeing the actual product where we can see our customers and talk to them in real life.”

Vogl says she and her partners chose to open a store in Orlando because it is a tourist hub. For them, their store is giving women options they never hadm and changing perceptions of what it even means to be a woman in this area’s growing Muslim community.

“It is a hijabi Muslim-run, women-run business. This is front in-your-face that we are exactly not who you think we are. We are strong, independent, business educated women,” she adds.

Perceptions aside—pure numbers show the Islamic fashion industry is responding to a real need. Haroon Latif heads research for Dinar Standard, a global firm that looks at how the world’s growing Muslim population is driving certain industries, like modest wear.

“There’s 3 to 5 million Muslims in the US,” says Latiff. “And that’s expected to double by 2050. Muslims consumers are a consumer group that has their own values and as those values deepen, they start to demand very unique services. Modest fashion is just a subset of that.”

In a recent report his firm found that Muslims spent an estimated $244 billion in clothing last year. He predicts spending to reach more than $300 billion by 2020.  Demand for modest wear is up—and mainstream companies are responding.

“H&M, Dolce & Gabbana, in the UK in particular Marks & Spencer is one of the leading retailers and they have just launched a ‘burquini’ brand.”

Back at the mall, Maryam Khan stands outside the store. She’s looking forward to seeing all kinds of women discover modest wear fashion. Her coworkers have already been asking her for the names of her favorite online stores.

“It’s always nice when I go to my work and my VP will come in and be like ‘Oh my God! I love your outfit! Where did you get it?’ And I share all my websites with them. And you’d be surprised. They order the stuff and they wouldn’t wear it the way I wear it but they still wear it because, at the end of the day, it’s just clothes. It’s fun, fashionable clothes.”