Mister Rogers Sculpture Announced for Rollins College Campus: “We Remember Those Who Loved Us Into Being” 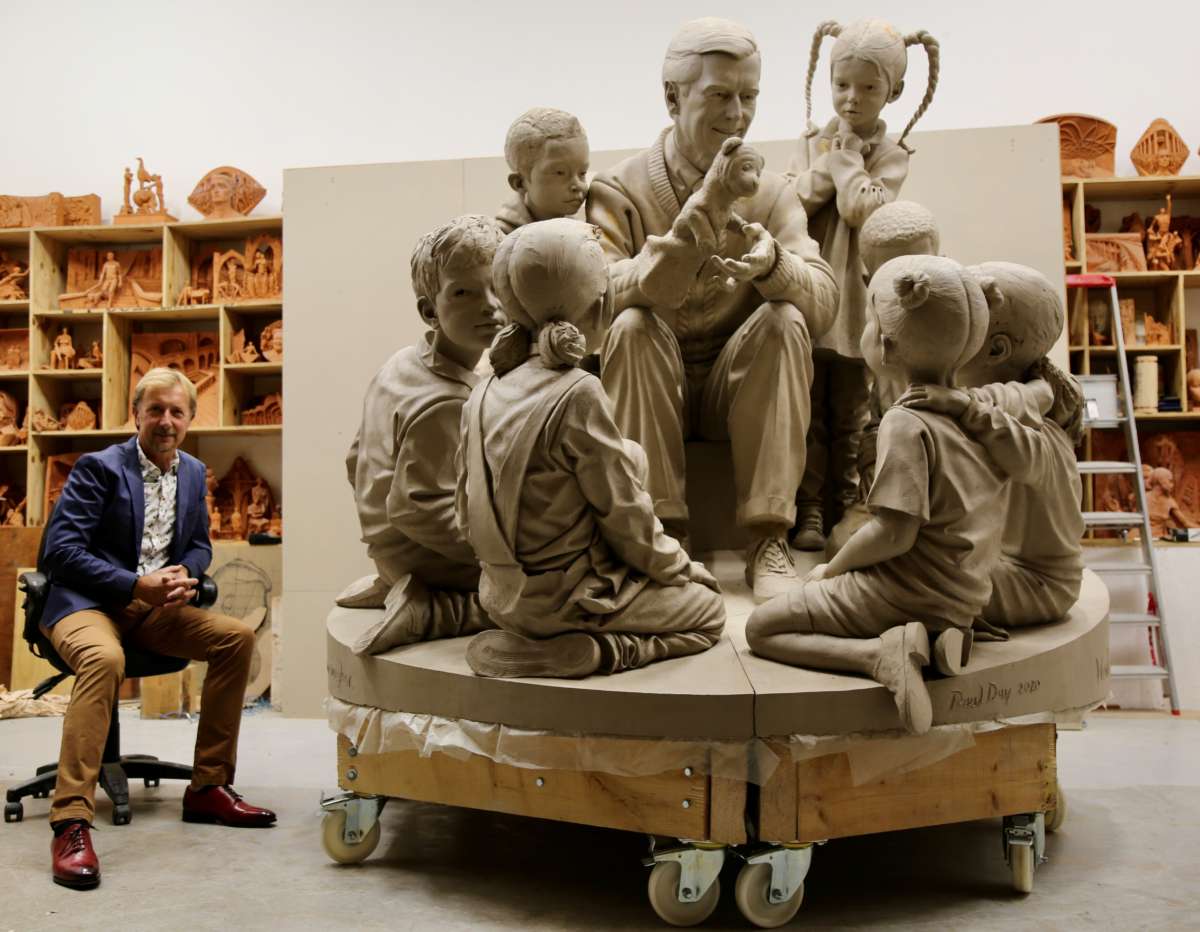 Rollins College unveiled first look photos of a new Mister Rogers sculpture today. The “A Beautiful Day for a Neighbor” sculpture will be installed on campus this fall.

Paul Day, the British artist behind the sculpture, says he didn’t grow up on Mister Rogers.

But in his research, he says a scene from the 2018 “Won’t You Be My Neighbor?” documentary seemed to define the man who communicated on a personal level with children about sometimes difficult topics.

“There was a scene in that movie where Fred through Daniel talks to a little boy about his pet dog who’s just died. And the little child confides in Daniel what he felt about losing his dog.”

With this as his inspiration, along with interviews with Rogers’ widow Joanne and hours of the Mister Rogers’ Neighborhood Show, Day crafted Rogers out of clay in his iconic sweater and sneakers holding a Daniel Tiger puppet with seven children surrounding him.

At the back of the sculpture are other hand puppets from the show and the lyrics to the theme song.

“I would like the sculpture to bring back, to refresh the memory of those programs in the minds of people who grew up with Fred and to just be reminded and encouraged by that of all those messages of love and neighborliness.”

Now a Mister Rogers fan, Day says the idea for the statue wasn’t his own but Allan Keen’s.

“Well it was my mad hatter idea.”

Keen, a trustee at Rollins, says it was on a trip to France and England in 2019 that he was first introduced to Day’s work, including a 30-foot tall statue at St. Pancras Station in London, called “The Meeting Place.”

Keen also visited Day’s studio, and when he returned home, he invited Day to help the college memorialize Rogers, who graduated with his bachelors in music in 1951.

“We’ve done a lot of things to honor him. But we have no permanent memorial to him or anything.”

Grant Cornwell the president of Rollins College was on board.

Cornwell says they’re already planning out parking and accessibility for the thousands of fans they expect the statue will draw to campus. The sculpture will sit between the Annie Russell Theatre and the Knowles Memorial Chapel when it’s unveiled in October.

Among those who plan on visiting the sculpture are Rogers’ nephew Dan Crozier who teaches music on the Rollins faculty.

“You know I’m reminded of him so much everyday with pictures at home. And all these other things that we have that remind us of him. But it will be very nice to see him on campus too.”

Rogers’ son John who lives nearby is also excited to visit often. He says his dad was always content to see the impact his TV show had on viewers.

“You know when people would come to whether we’re sitting at a table at a restaurant or something people were usually very nice and they’d come over and not want to interrupt. But they’d just thank him. And he’d say, ‘oh I’m so glad that my work was able to help you’.”

John Rogers says the statue is a fitting memorial to a man who raised up millions of children who tuned in every week.

“As Dad always used to say that, ‘we remember those who loved us into being’.”