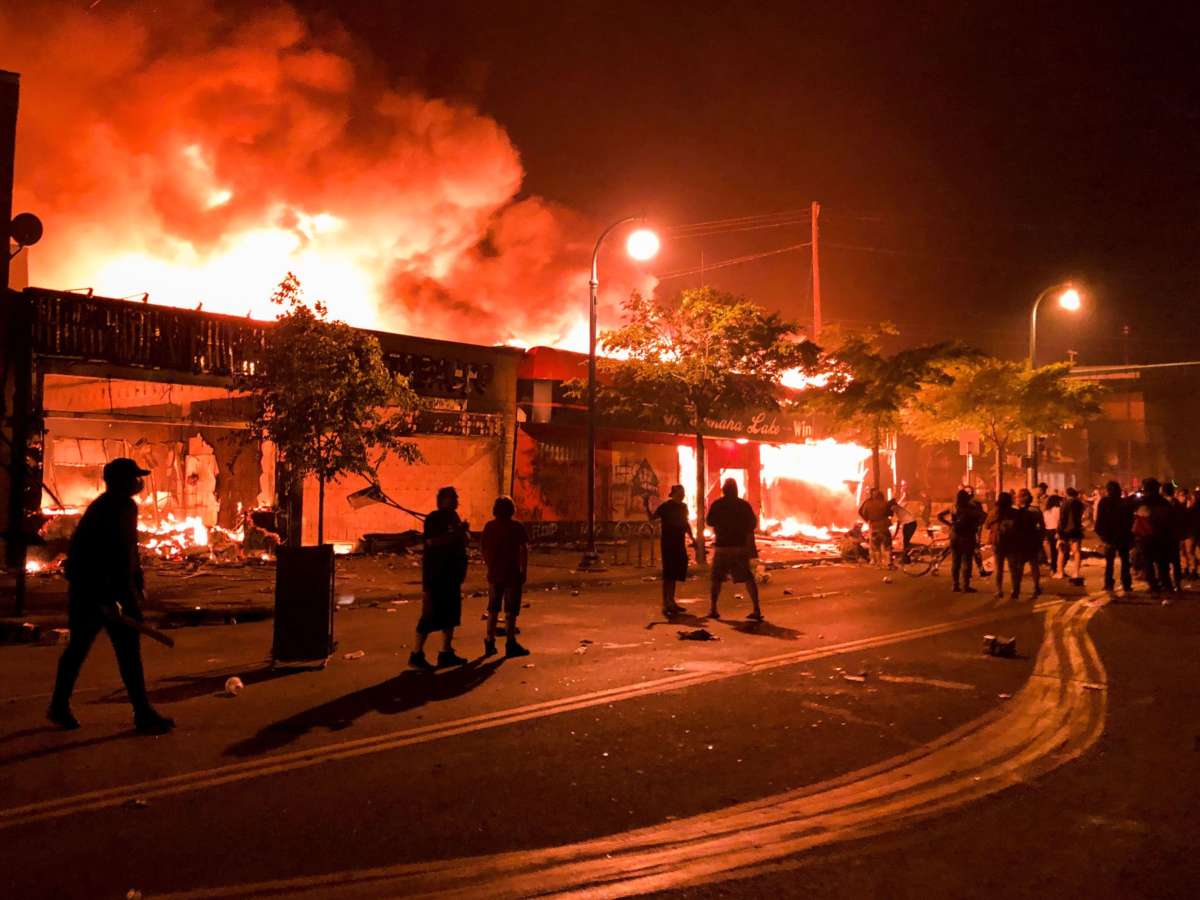 Flames rise from a liquor store and shops near the Third Police Precinct on May 28, 2020 in Minneapolis, Minnesota, during a protest over the death of George Floyd, an unarmed black man, who died after a police officer kneeled on his neck for several minutes.
Image credit: Kerem Yucel

For a third straight night, the Midwestern city saw clashes between police and protesters after the death of George Floyd, a black man whose arresting officer was recorded kneeling on his neck for minutes on end.

The four officers involved have been fired and the incident is under federal investigation, but demonstrators are not satisfied. Some of them stormed the 3rd Police Precinct, setting fire to that building and others in the neighborhood.

President Trump, who called Floyd’s death “very sad and tragic” earlier this week, said early Friday that he had told Minnesota’s governor that “the Military is with him all the way.”

He also described the source of the unrest as “THUGS” — a word widely criticized for bearing racial overtones.

“Any difficulty and we will assume control but, when the looting starts, the shooting starts,” he continued, in a tweet flagged by Twitter for violating its policy against glorifying violence.

The president’s comments came after a night of chaos in the Twin cities of Minneapolis and St. Paul, where several fires raged and some businesses were sacked, according to Minnesota Public Radio. Protesters also overran the 3rd Precinct after police withdrew in an attempt to mitigate tensions.

“Brick and mortar is not as important as life,” Minneapolis Mayor Jacob Frey said, noting that though the building was emptied, patrols would continue in the neighborhood. “We are doing absolutely everything that we can to keep the peace.”

Minneapolis has seethed since the release of the video depicting Floyd’s arrest by a white police officer. The officer plants a knee on his neck for at least seven minutes as Floyd wails for help and eventually falls silent, as bystanders shout that he’s dying.

The officer did not remove his knee until paramedics showed up to move Floyd’s unresponsive body into an ambulance. He was reported dead later that night.

Since then, Minneapolis has seen a series of escalating protests over his death, while anger has been evident in other cities, as well.

Protesters have turned out to express their outrage as far as Los Angeles and New York City. Meanwhile in Louisville, Ky., demonstrators gathered Thursday to protest death of Breonna Taylor, a black woman shot by police in her home in March.

Flames consume a liquor store near the 3rd Precinct in Minneapolis, where demonstrators gathered for a third straight night to protest the death of George Floyd in police custody. The precinct, which police had abandoned, burned after a group of protesters pushed through barriers around the building, breaking windows and chanting slogans.
Kerem Yucel/AFP via Getty Images

As one protester in Minneapolis told NPR, the anger over Floyd’s death is about more than just one man — it’s about how police treat black people across the U.S.

“This is how our people react, you know? When we’ve been done wrong for so long,” he said. “So, me, I’m just praying and hoping everybody make it home safe.”

On Friday morning, state police arrested a CNN crew — while they were reporting about the unrest on live television.

“A black reporter from CNN was arrested while legally covering the protests in Minneapolis,” the network pointedly noted. “A white reporter also on the ground was not.”

The swift backtrack did little to soften the shock of the spectacle, though.

“With all the perversions of American democracy that we have witnessed, few rival the dystopian spectacle of a U.S. journalist calmly reporting the news and repeatedly offering to reposition his crew at the police’s request, only to be arrested, cuffed, and hauled away alongside his crew,” said Suzanne Nossel, CEO of PEN America, advocacy group that fights for press freedom.

She added: “For us at PEN America, where we routinely document the arrest and imprisonment of writers and journalists worldwide, the action was eerily familiar, but something we expect to see in authoritarian states: Turkey, Hong Kong, Egypt. To see it in the United States of America is appalling.”