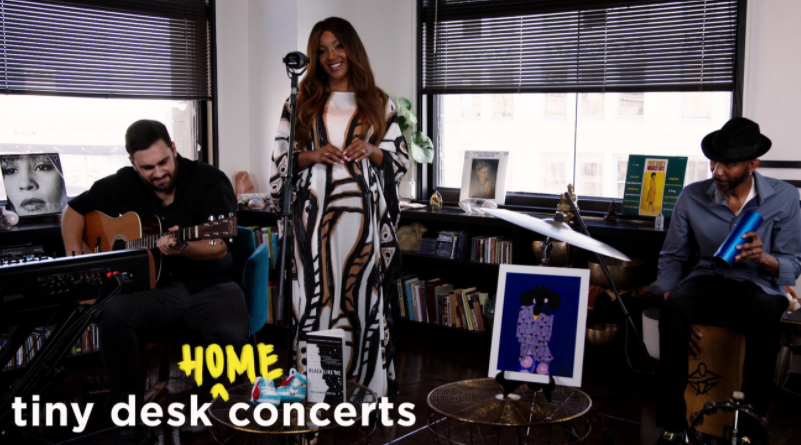 Mickey Guyton recorded her three-song Tiny Desk (home) concert in a warm-hued corner of a friend’s studio near her Los Angeles home. Her makeshift desk holds the book that inspired its title, alongside a pair of blue baby booties: Guyton will soon give birth to her first child. Albums by Whitney Houston and Patsy Cline — Guyton’s guardian angels — rest on the window ledge. The hands of keyboardist Lynette Williams, who also plays in Childish Gambino’s band, are the first sight you see as the music starts. This is country: soulful keyboards, the Afro-Caribbean instruments of percussionist Paul Allen, Jon Sosin’s acoustic guitar. Guyton raises the rafters and distills emotion with impeccable clarity. Her high notes thrill, her nuance in storytelling captivates. A star for our times claims her place.

America is living through a moment of change, and it’s difficult to imagine a better artist to greet it than Guyton. The Texas native has long been a favorite of country music connoisseurs for her lucid songwriting style and the dazzling dynamic range and power of her voice. And yet, it took Guyton nearly a decade to be fully embraced within the country world she loves. This year is her year. In February, as protests against sexism intensified in the country world, she debuted “What Are You Gonna Tell Her” and it caused an instant sensation. In June, after the killing of George Floyd, Guyton released “Black Like Me,” which tells her own story in a way that gently but resolutely calls for change. Suddenly Guyton was an emblem. What matters most is that she is a great singer and writer redefining country music’s sound, as well as its image. That’s what she makes undeniably clear here.