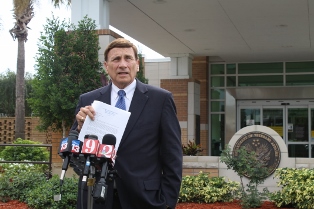 “The quickest way to get a 120-bed unit which is empty moving and open is to transfer it to the state of Florida veteran’s service office,” Mica said. “They can do it cheaper, quicker and less cost to the taxpayer. And they’ve agreed to do that.”

TThe VA has opened a $665 million, brand new VA hospital in Medical City. And that always begs the question: What do you do with the older Baldwin Park VA?

The facility has been empty since the VA opened the new 120-bed nursing home in Lake Nona. John Mica has consistently lobbied to keep the Baldwin Park facility open, arguing that the growth in veteran population justifies keeping it open. And the VA has agreed in principle.

Heather Frebe, a spokesman for the Orlando VA Medical Center, said the VA can’t comment on proposed legislation. But she said the support of the local congressional delegation has helped keep the Baldwin Park center opened.

“The current Nursing Home is being utilized as “swing space” for Compensation and Pension, and Homeless outreach staff until that can be relocated into other space within the Lake Baldwin campus,” Frebe wrote in a statement. “Space will be made available as activations of the Lake Nona campus continue.  Surgery is the next major clinical activity to move to Lake Nona, and this is currently planned for Mid-December.”