State Board Approves $1.7 Billion in Bonds for Miami-to-Orlando Rail Project 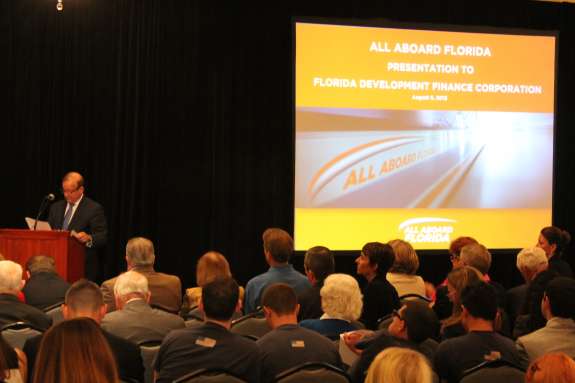 The Florida Development Finance Corporation held a meeting to decide whether to approve tax-exempt bonds for All Aboard Florida. Photo: Renata Sago, WMFE.

The Florida Development Finance Corporation, a state board, has approved nearly $1.7 billion in tax-exempt bonds for what could be the nation’s first fully privately operated rail service.

All Aboard Florida would shuttle riders from Miami-to-Orlando. It is expected to bring 10 thousand jobs and more than $2 billion in state revenue.

Supporters of the project foresee it reducing traffic on the roads and boosting tourism.

“This is a no-win proposition. This board owes its allegiance to the taxpayers of Florida. This is a public board. They regard All Aboard Florida as their client, and that’s not appropriate,” he said at this afternoon’s meeting.

Opponents are also concerned residents would assume maintenance costs for a service that might not service their communities.