Dr. Jill Biden: Our Hearts Were Really With All Floridians Today 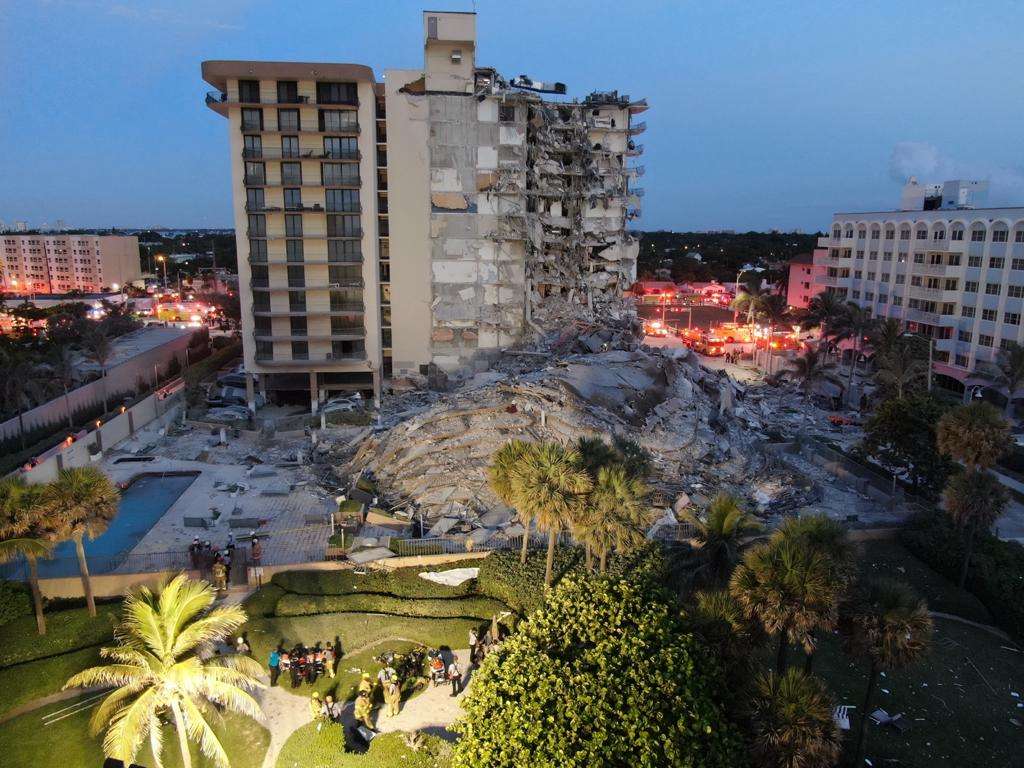 Speaking at Osceola Community Health Services on Thursday at a stop on her nationwide vaccination tour, Dr. Jill Biden began her remarks by addressing the tragedy in Miami.

Biden said both she and the President were greatly saddened by the building in Miami that had crumbled, leaving one person dead, and others missing.

“Our hearts were really with all Floridians today, as we all woke up to this horrible tragedy on the news.”

Authorities say nearly 100 people are still unaccounted for after part of a 12-story beachfront condo building collapsed in a town outside Miami.

The collapse in the community of Surfside killed at least one person and trapped others in rubble and twisted metal.

Rescuers pulled dozens of survivors from the tower Thursday morning and continued to look for more.

Officials did not know how many people were in the tower when it fell around 1:30 a.m.

On Thursday afternoon, Gov. Ron DeSantis toured what he called “the really tragic scenes” of the partially collapsed Champlain Towers South condominiums in Surfside near Miami.

He focused on the response of Miami-Dade first responders.

“They were on that scene before we knew whether there would be more collapse,” DeSantis said from the scene. “We didn’t know whether the building had any structural integrity. And they were shepherding people to safety.”

Search and rescue efforts were underway after a large part of the 12-story building collapsed.

“A massive search and rescue is underway,” she said, “and we know that we’re going to do everything that we can possibly do to identify and rescue those who have been trapped in the rubble.”

Miami-Dade Assistant Fire Chief Ray Jadallah said the building had 130 units and 55 apartments were destroyed when it collapsed. The cause has not been identified.

Rescuers pulled 35 people from the building and two from the rumble. Ten people were assessed and treated. Two were transported to hospitals.

At least one person has died.

Watch LIVE as officials hold a press conference on scene of the #SurfsideBuildingCollapse: https://t.co/P97fQEdARM

Surfside Mayor Charles Burkett warned that the building manager told him the tower was quite full and the death toll was likely to rise.

All the town Surfside could do, he said, was ring the alarm bell.

“And we range the alarm bell. And Mayor Cava sent the cavalry, as did the governor, and that has made all the difference in the world,” Burkett said. “They’ve got resources like you can’t believe here. We’ve got the dogs. We’ve got the equipment. And we’re going to do our very best to save as many people in that pile of rubble as we possibly can.”

“It’s a really, really tragic situation,” the governor said earlier in the day. “So we’ll hope for the best in terms of additional recoveries. But we are bracing for some bad news, given the destruction that we’re seeing.”

Authorities are urging anyone concerned about a friend or relative who may have been there to call 305-614-1819.

Soccer game kept woman away from condo wing that collapsed

A woman may have soccer to thank for a decision to not stay overnight in the wing of a 12-story condo building outside of Miami that collapsed.

Patricia Avilez told The Associated Press that she keeps an eye on her brother-in-law’s condo when he’s away. His unit is located in the section of the L-shaped building that pancaked early Thursday, killing at least one person.

Avilez says she initially planned to go there Wednesday night and sleep over. But she was watching a soccer game and decided to just wait until the morning. On her way over before dawn Thursday, she heard about the collapse.

Barry Cohen and his wife were sound asleep in their beachside condominium near Miami when he heard what he thought was a crack of thunder.

He says they got up, opened the door leading to their hallway and faced a pile of rubble and billowing smoke.

The two couldn’t get out on their own but were eventually rescued by firefighters using equipment to get people out of the building.