‘Mercury Rising’ Explores The US’ Treacherous Attempts to Control Space 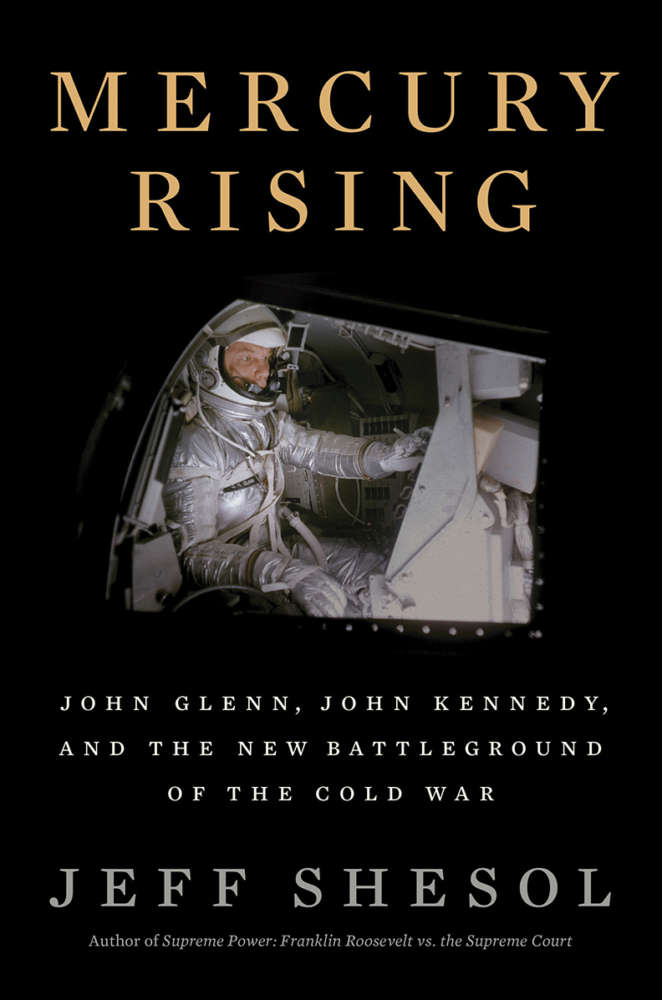 On the morning of Feb. 20, 1962, about 100,000 spectators gathered in Cape Canaveral, Fla., to witness the launch of the Friendship 7, the United States’ first mission to put an astronaut in orbit around the Earth.

It was early in the space race, and the tension was palpable. Historian Jeff Shesol says there was real fear that astronaut John Glenn wouldn’t survive the day.

“There was a long, sorry history of these rockets horrifically exploding on the launch pad or going up and then coming down into the sea, or firing their payload — some kind of scientific satellite or other — into the Atlantic,” he says.

Even Glenn was prepared for failure. Before the mission the astronaut wrote letters that would be distributed to his family in the event that he did not return safely.

“Glenn understood that his job was to appear calm, to appear confident, and he played that role very successfully,” Shesol says. “But in his private moments, there were cracks in that facade. And … as one delay followed another, he really began to reckon with the fact that he might actually become the first man to die in space, [that] he might become a Cold War casualty.”

But the Friendship 7 mission was a success; Glenn orbited Earth three times that day before splashing down in the Atlantic as planned. In his new book, Mercury Rising, Shesol writes about that mission and, more broadly, about how Cold War fears fueled the early days of the space program.

Shesol says President Kennedy was initially reluctant to embrace the space exploration, but watching the Soviets succeed in their missions helped change his mind.

“JFK had said during the campaign in 1960 that if the Soviets control space, they control Earth,” Shesol says. “This was a Cold War contest that wasn’t just symbolic, it was an existential struggle — and it was one that America seemed to be losing.”

[At the time] it felt actually that the Soviets might be onto something, that, in fact, communism might indeed be as they said it was: the wave of the future. The world was watching this contest. America’s allies were watching. Soviet Russians themselves were watching, and the so-called undecided nations of the world were watching. These were mostly developing countries that were coming out of colonialism, and many of them were said to be deciding which system they were going to follow. Were they going to become democracies, or were they going to essentially sign up with the communists in the Cold War? And one of the things that they were watching [was] to see which system better provided for their people in the future, which system offered more in terms of science, technology and economic advancement, [and] what was happening in space was seen as the great indicator of the future. And America was losing that fight.

On the public nature of America’s failed rocket launches

It was a very powerful sight. It wound up in newsreels that were seen around the world, the United States being what it is, being a democracy, having freedom of the press and also the freedom of international press to come over here and visit Cape Canaveral and watch one of these things blow up. The world knew about all of the failures of the American program while the Soviets were allowed to fail in secret. The secrecy of the Soviet program was one of the things that allowed it to feel invulnerable, because no one knew when their rockets blew up and the rockets did sometimes blow up. In fact, they lost one of their cosmonauts early on in an absolutely horrific accident that was uncovered only many, many years later. So the Soviet program appeared invincible because all we ever saw were the successes.

This sounds incredibly fanciful, but it was something that was widely accepted by experts as inevitable that the Soviets would build a nuclear base on the moon. Now, why would you build a nuclear base on the moon when you’ve got perfectly good nuclear bases across Siberia and wherever else? Well, the idea was that building it on the moon would take it outside the range of U.S. defenses and that we couldn’t destroy it. And so at any point, they could push a button and it would fire a missile from the moon onto some spot in the United States. This was a very real fear. And the feeling on the part of the military was that if we didn’t begin to build our arsenal in space, the Soviets were certainly going to beat us to it. It didn’t matter how many experts said that this was impossible. The Soviets were so incredibly able to do amazing things in space that no one had thought possible, that there was simply a willingness to believe on the part of many Americans and policymakers and even many in the White House, that the Soviets could simply do whatever it was that they set their minds to doing.

On how dangerous the Friendship 7 launch was

And these little things, I mean, it sounds funny, [Glenn’s helmet was missing] this little clip … [to hold his] microphone. … They found another helmet, thankfully, at the last minute. Sitting in the van down at the bottom of the gantry, there was an extra helmet. They raced down and brought it up. If they couldn’t fix that, they couldn’t send them to space because otherwise he couldn’t communicate with mission control. You can’t send a person into space and not allow them to communicate with mission control. So all of these things seemed to heighten the sense of danger and make it seem increasingly possible over months and months of problems and delays that Glenn was never going to get into orbit and that if he did actually finally lift off from the pad that something terrible was going to happen.

He wrote a long letter to his children that he wanted them to read whether or not he came back safely. And as he sat and thought about it again later, he felt that he hadn’t said everything he wanted to say, so he wrote himself a script. And I found this in his files in Columbus at Ohio State, and it had never been published before. …

It’s very chilling reading. He says, “If you hear this, I’ve been killed. I made peace with God a long time ago before this happened. I didn’t always live like I had this confidence, but I kept trying.” And he talks about the importance of his mission. He explains why the sacrifice of his own life was worthwhile. He talks to his kids about how he wants them to behave at the funeral at Arlington, and he even tells them that he’s going to send them a sign from the afterlife. He very much believed in an afterlife and he told them that they should go outside at Arlington after the ceremony and they should look at the highest branch on the tree and when it waved at them, that that was him. It’s incredibly poignant reading and he then made the recording. And one of the last things that Glenn said to his wife, Annie, from the capsule on top of the rocket before he launched was, “Did you get the tapes?” He had made one for his kids and he had made one for Annie.

On how the Cold War pushed the U.S. to put a man on the moon

I think that it was the Cold War that that gave the space program its purpose, its mission and its energy and drive that absent that, there was not a consensus in the country among politicians or even within the scientific community that human space flight was all that important, that it was possibly worth the national effort or the national expenditure. That’s not to say that it wouldn’t have happened eventually. But really, the reason that it happened when it happened, the reason that the nation was able to apply all of its energies and skill after a certain point to this mission of getting a series of men into space and ultimately onto the moon, that it was the Cold War competition, which then ebbed somewhat by the late 1960s. But at that point, the program had what they call in the business “escape velocity,” that it had actually built up sufficient momentum to slip the bonds of Earth and we were going to the moon by that point. That commitment had been made and was well underway.

Sam Briger and Seth Kelley produced and edited this interview for broadcast. Bridget Bentz, Molly Seavy-Nesper and Meghan Sullivan adapted it for the web.