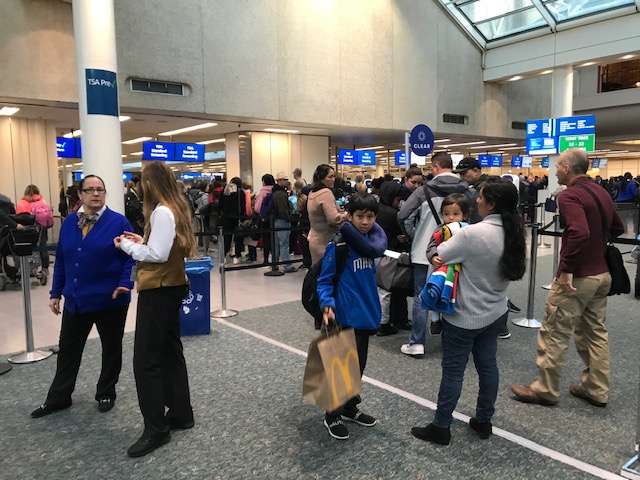 Wilma Diaz and her sons Axel (facing camera) and Josh wait to go through security at Orlando International Airport, as Diaz is deported to El Salvador. Photo: Danielle Prieur

Melbourne resident Vilma Diaz, 41, was put on a plane to El Salvador by Immigration and Customs Enforcement Agents at the Orlando International Airport on Saturday. Her two boys, both U.S. citizens, went with her.

Diaz came to the United States from El Salvador without papers in 2000. She met and married a man from Mexico, and they set up a landscaping business in Melbourne.

A month ago she was notified by U.S. Immigration and Customs Enforcement that she would be deported on Feb. 22.

Diaz’s attorney, Karen Iezzi, said her deportation followed two failed attempts to apply for immigration status: first through TPS and then as an asylum seeker.

“Because she entered unlawfully, the only option she had was asylum,” said Iezzi.

“But there’s a lot of complicated rules to asylum. You have to have a really good attorney to do an asylum case. The attorney that she had was later disbarred. And I get the impression that he did not do a very good job. So, she ended up losing her case and being deported.”

Iezzi said the Trump administration has made it harder for people like Diaz to qualify for asylum using prerequisites like the threat of gender or gang-based violence.

She said Diaz’s boys could have stayed in the country, but they were already showing signs of distress as her deportation neared. Axel had started to cry at school and had problems concentrating in class. He’d also developed an undiagnosed gastrointestinal problem.

“Especially the older one, since she’s the only parent he has, it’s really a de-facto deportation. Because there’s really no one else for him to stay with other than friends. They are going with her because the 2-year-old is too young to be separated from her. The 11-year-old is very attached to her. She spends all her time with them. They just can’t handle being apart from her.”

Pastor Joel Tooley of Melbourne First Church of the Nazarene said they’ll be working with Iezzi to return Diaz and her two sons to the United States. He says they’re contributing members of the community.

“This is a mom who runs a business. She’s parenting her kids excellently. She’s involved with the school; she’s involved in her church. She’s the kind of neighbor that I want living next door to me,” said Tooley.

“To see her deported is a natural consequence of her unlawful presence in the U.S. But to see these two kids – U.S. citizens – faced with this type of rejection by their own country is unfathomable. There’s no words to make it make sense.”

Tooley said he’s also worried about the safety of the two boys. Axel needs frequent medical attention, for asthma attacks and a congenital heart defect, that he won’t be able to get outside the United States.

He said Axel will also be targeted by local gangs.

“If he doesn’t join, there will be threats made against his family. They will either threaten to kidnap, extort or in some cases physically harm them.”

Diaz’s brother Jose “Carlos” Diaz said it’s important to remember that Vilma and her two sons are being returned to a country that they don’t know. He said she’s been living in the United States for 16 years, and the boys have never been to El Salvador.

He said they need to be allowed to appeal the decision.

Iezzi said it will be another decade before Diaz can legally apply for citizenship.

According to the U.S. Department of Homeland Security, 19,000 Salvadorans were deported from the United States in 2019, an increase from the previous year.