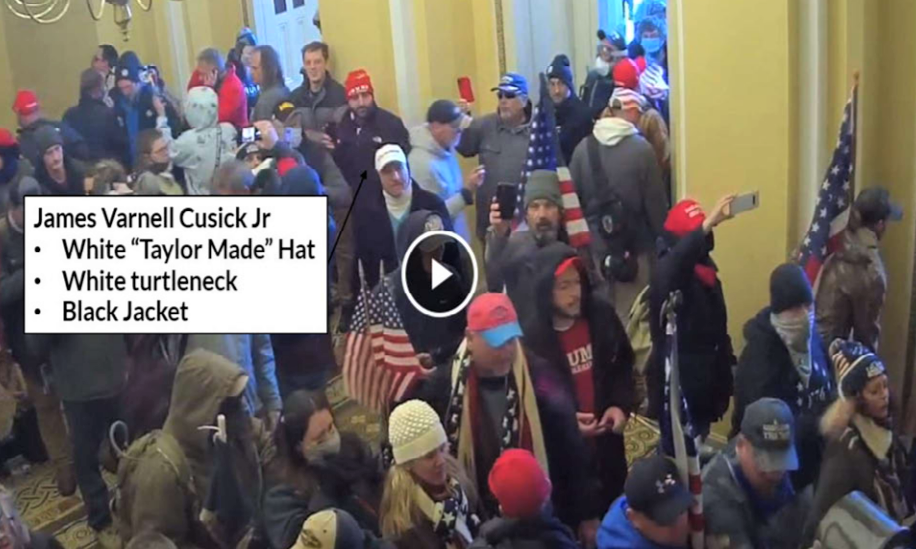 Federal criminal complaints allege that James Cusick Jr., in the white cap; Casey Cusick, in the red cap behind him; and David John Lesperance, in the blue cap with a red cellphone, can be seen on surveillance video inside the U.S. Capitol on Jan. 6. Image: DOJ

A pastor at a Melbourne church and his son, who is also minister there, have been charged in connection with the January 6th Capitol breach.

Federal investigators say they breached the U.S. Capitol with David John Lesperance, an air conditioner repairman who attends the church.

The three appeared in federal court in Orlando Thursday and were released on bond.

They are charged with unlawfully entering the Capitol and disorderly conduct inside.

The FBI had received an anonymous letter pointing to them. An agent interviewed Lesperance, who admitted being there with his pastor but refused to give names.

But the FBI used cellphone data, images from his iCloud account and police body cam and surveillance videos to put all three inside the Capitol.

They are among more than 450 people charged in connection with the mob that stormed the Capitol, seeking to stop the certification of Joe Biden as president.