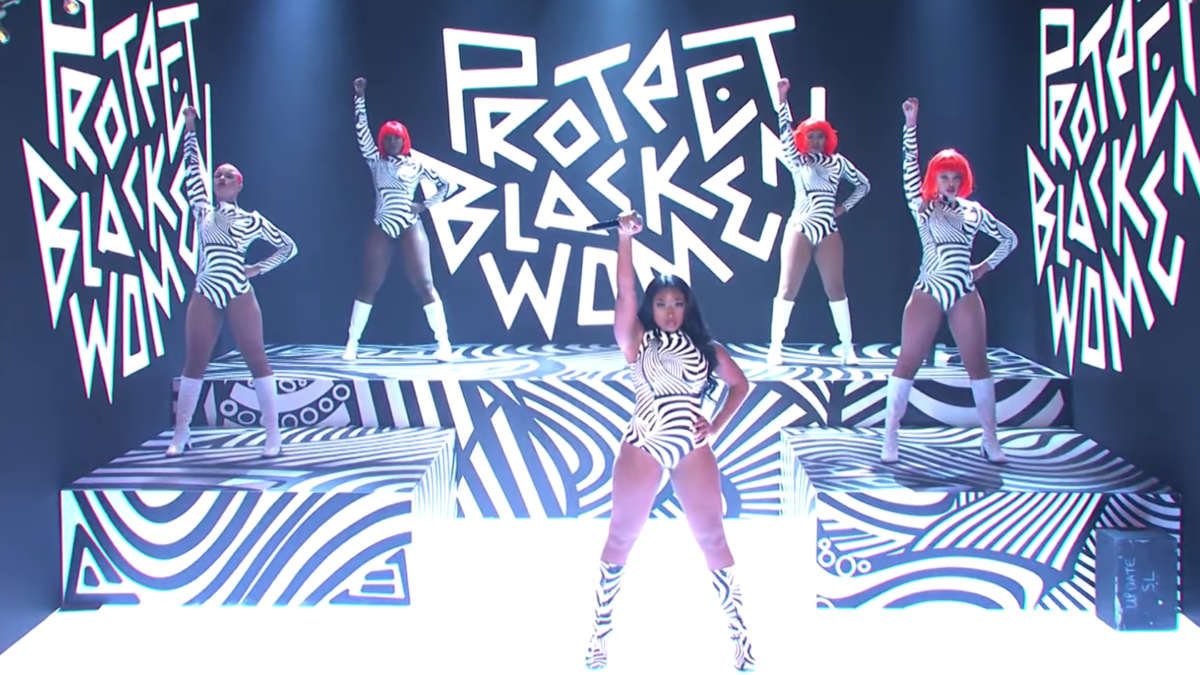 Megan Thee Stallion protests the Breonna Taylor ruling during a performance of her hit "Savage" on Saturday Night Live on Oct. 3, 2020.

During Megan’s first song of the night, her viral single “Savage,” the backdrop of her set read “Protect Black Women.” About halfway through the song, after Beyoncé’s verse from the song’s remix played over the stage’s loudspeakers, the music cut out to the sound of rapid gunfire while Megan and her dancers stood silently in front of a screen riddled with images of gunshots.

That recording was immediately followed by one of activist Tamika Mallory, speaking last week following the announcement by Cameron, who is Black, that no significant charges would be brought against the officers involved in the March shooting death of Taylor, who was killed in her own home by police during a “no-knock” raid in the middle of the night: “Daniel Cameron is no different than the sell-out negroes who sold our people into slavery.”

She extended her message to protecting Black men from turning into social media hashtags before jumping back into the performance.

Megan’s message is amplified by her own experience with gun violence. On July 12, according to the Houston rapper’s Instagram account, Tory Lanez fired several gunshots at her after the two got into an argument, resulting in injuries to her feet. Bystanders called law enforcement after hearing the gunshots. Megan didn’t file a police report, but Lanez was eventually arrested on suspicion of carrying a concealed weapon and later released on bail. Despite initially shielding Lanez from public scrutiny and law enforcement, Megan still faced a barrage of ridicule and accusations of lying.

Lanez addressed the shooting by releasing an album in late September with disparaging remarks against women in music, including rapper Asian Doll and singer JoJo, who voiced support for Megan.

The show closed out with Megan performing her latest single, “Don’t Stop,” with a brief cameo from Young Thug. “WAP” — Megan’s song with Cardi B, currently No. 2 in the country — didn’t get a live performance, but it was referenced in the opening segment with Maya Rudolph as vice-presidential candidate Kamala Harris. “We need a WAP: woman as president,” Rudolph said.