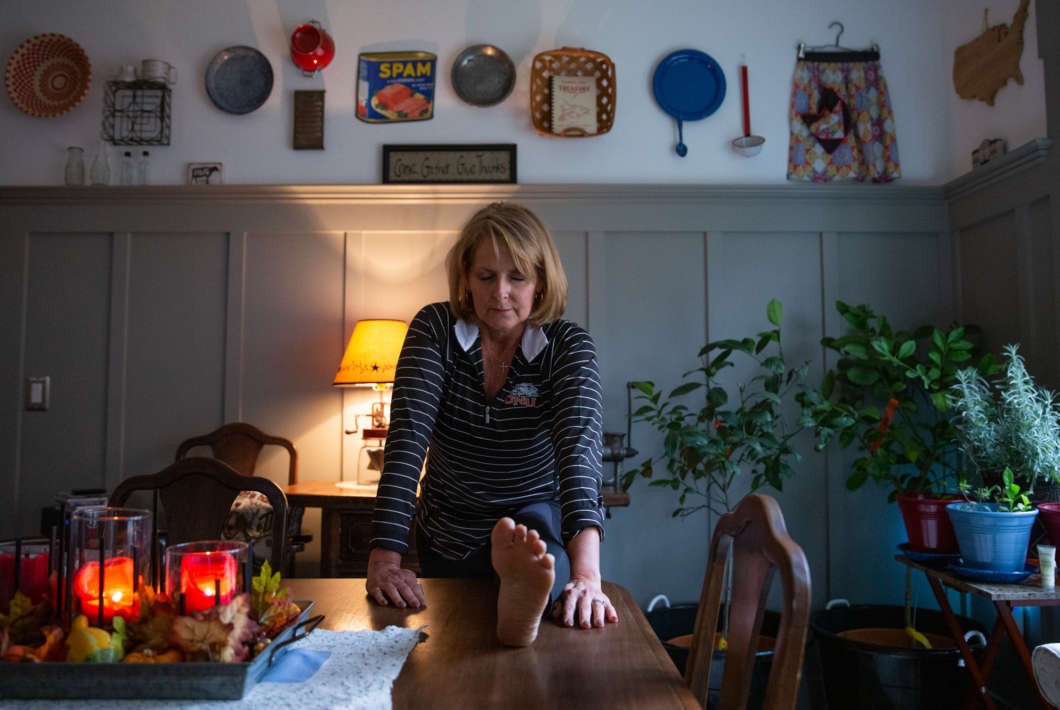 To deal with chronic pain, Pamela Bobb's morning routine now includes stretching and meditation at home in Fairfield Glade, Tenn. Bobb says this mind-body awareness and intervention has greatly reduced the amount of painkiller she needs.

There’s new evidence that mind-body interventions can help reduce pain in people who’ve been taking prescription opioids — and lead to reductions in the drug’s dose.

In a study published this month in JAMA Internal Medicine, researchers reviewed evidence from 60 studies that included about 6,400 participants. They evaluated a range of strategies, including meditation, guided imagery, hypnosis and cognitive behavioral therapy.

“Mindfulness, cognitive behavioral therapy and clinical hypnosis appear to be the most useful for reducing pain,” says study author Eric Garland, a professor at the University of Utah. The reductions in dose were modest overall, he says, but the study is a signal that this approach is beneficial.

And, Pamela Bobb, who lives in Fairfield Glade, Tenn., can attest to the benefits. She’s 56 and has endured decades of pain. “Oh, I had been suffering terribly for years,” Bobb tells us.

She was born with a malformation in her pelvis that led to pain. Over the span of two decades, she underwent more than a dozen major surgeries, yet none of them gave her relief; each procedure left more scar tissue and nerve damage.

“I felt desperate, ” Bobb says. “I didn’t feel like I had any control.”

She couldn’t do basic things such as cook — or take care of her family.

“I was completely debilitated,” Bobb says. “And when you get to that point, you can’t see beyond the pain — you’re just surviving.”

She was was put on high doses of opioids to ease the constant pain, but then, a few years ago, thought “there just has to be a better way.” She didn’t feel like herself on the drugs, she says. Ultimately, she found help at a clinic that specializes in complementary and alternative medicine.

“We offer a variety of things, explains Wayne Jonas, a physician who treated Bobb at the Fort Belvoir Community Hospital Pain Clinic in Fairfax County, Va.

“We offer physical therapy, behavioral medicine, acupuncture, yoga and mind body practices,” Jonas says. None of these is a cure-all, he adds, but the idea is that there are lots of tools in the toolkit for people to try.

Jonas is a long-time proponent of an integrated, mind-body approach to treating pain, and is the author of How Healing Works, a book that describes the science behind these approaches.

He says when someone is in severe pain, their body’s normal defenses are down.

“It bumps up a variety of dysfunctions,” Jonas says. Pain increases levels of the stress hormone cortisol, and increases inflammatory processes in the body, too. “This starts a continual negative feedback loop that produces more pain,” Jonas explains.

It’s not a surprise, he says, that techniques such as meditation or yoga can be helpful. “If you engage in a deep mindfulness — and relaxation — it will counter those stress responses,” Jonas says.

Think of meditation as a form of mental exercise.

“It’s almost like weightlifting for your brain,” says Garland. Just as curling a dumbbell strengthens the bicep, he says, “meditation is almost a way of, sort, of curling the dumbbell of the mind to strengthen the mind’s self control.”

But there’s a trick here: Learning to meditate takes time, effort and some training — it’s more complicated than swallowing a pill. Pamela Bobb has stuck with it. She’s tried a bunch of these alternative mind-body strategies, including acupuncture and biofeedback, and now starts every morning with a meditation practice.

“It’s 4:45 in the morning — and I’ve just awakened,” she says in a recording she made of her practice, so I could listen in. She sounds centered, and calm. “I’m allowing my body to feel as relaxed as it possibly can.”

Bobb has also overhauled her diet, now eating a lot more greens, fruits and vegetables and herbs and spices with anti-inflammatory properties. On the day we talk, she’s making a spinach saute with ginger, mint and rosemary.

“I swear you can smell each of those spices, they smell so good!” she says.

Bobb is so at ease now that, just hanging out with her, you’d never guess all that she’s endured. And she feels so much better, she says.

“It’s empowering to [have] come all this way,” Bobb says. She says she’s made a fundamental transition in her mind: Instead of waiting for doctors to heal her with surgeries or injections, she now realizes that many of these alternative therapies have empowered her to help herself.

“So much of it does lie within me,” she says.

Bobb accepts she may never be completely pain-free, but now feels she has control over the discomfort.

She has reduced her opioid dose by 75%. She says she still benefits from a small, maintenance dose of the medication. And her doctors say that for her the benefits of the medicine outweigh the potential harms.

In the midst of an opioid epidemic, Pamela Bobb’s story may seem unlikely. But many people who’ve taken opioids for a prolonged period have similar stories. And, last month, the Department of Health and Human Services released new guidelines, urging doctors to take a deliberate approach to lowering doses of opioids for chronic pain patients.

The guidelines point to the potential harms of forcing patients off the medications.

“The goal is not necessarily to get off of all opioids but to reduce it to a dose [that is] safe,” Adm. Brett P. Giroir, a physician and assistant secretary for health at HHS told NPR. We asked him about Pamela Bobb’s case. He is not her doctor, but after hearing her story he said, “The fact that she’s been able to reduce her opioids substantially is a success story.”

Giroir says this kind of comprehensive approach that includes alternative therapies “could be a model for what we want to do nationwide.” He points out that, earlier this year, the Centers for Medicare & Medicaid Services proposed covering acupuncture for Medicare patients who have chronic lower back pain.

As the evidence accumulates, Giroir says, there will be more attention placed on covering alternative therapies.

A 2017 Gallup poll found that 78 percent of people would prefer to try other ways to address their physical pain before they take pain medication.

And doctor groups such as the American College of Physicians recommend that doctors offer more non-pharmacological treatments to pain patients, such as those who have chronic lower back pain.

Yet, a paper published last year finds most insurers have not adopted policies that are consistent with these guidelines, and many don’t pay for coverage of these services. An accompanying editorial, argues it’s time for that to change.

It’s clear, when it comes to tackling pain, it takes all the tools in the toolkit. And when it comes to opioids, the approach needn’t be all or nothing. Pamela Bobb says she’s learned that, for her, the combination of medicine plus mind-body therapies works best.