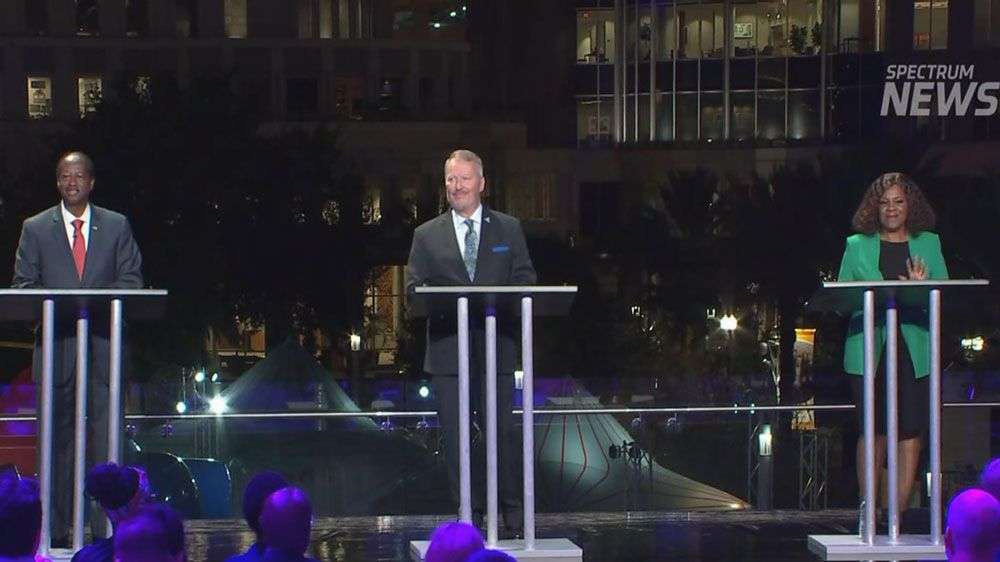 Candidates for Orlando mayor faced off in a televised debate last night at the Dr. Phillips Center for the Performing Arts.

One of the few issues the candidates could agree on was the need for a living wage for residents.

Mayor Buddy Dyer said the city will raise wages for city employees to $15 dollars an hour.

Ings said he wants to bring companies to Orlando that could pay $17 dollars an hour.

But the candidates were split on other issues like public safety.

Dyer said programs like Parramore Kidz Zone reduced crime as effectively as putting more officers on the street, while Simons and Ings want to see more police at airports and schools.

Simons said officers also needed to be trained to work more effectively in the community.

Candidates were also divided when it came to public transportation.

Dyer said that a penny sales tax Orange County Mayor Jerry Demings supports is needed to support transportation projects that are already underway: from extending SunRail to the airport to expanding roads like Wekiva Expressway.

“I say we take the bull by the horns and pass that sales tax.”

Ings and Simons both said they oppose the sales tax. Ings said  federal tax dollars and not local ones should pay for transportation upgrades.

“We have to reach out to our federal partners our U.S. congressmen, our U.S. senators, and the President of the United States to release funding to come down to our cities.”

Ings and Simons are also in favor of taxing tourists to the region to pay for these upgrades. Ings wants to see taxes on rental cars while Simons wants to see more hotel surcharges.

The audience remained silent as candidates discussed these topics.

But when Mayor Buddy Dyer said programs like the construction of the Exploria Soccer Stadium had helped develop Parramore the mood in the room shifted.

“They’re temporary. They come do temporary jobs take tickets or do parked cars.”

Ings said projects like this one worsened gentrification making it too costly for long-time residents to stay or for small businesses to operate in the area.

“A lot of the African-American businesses had to move out of Parramore and we need a plan to bring back a lot of those businesses so that they can thrive in downtown Orlando as well.”

Dyer pointed to the BLUEPRINT 2.0 Program that launched this week-along with the Creative Village as ways the city had brought educational and career opportunities to Parramore.

Orlando will hold its mayoral elections on November 5-with early voting beginning next week.