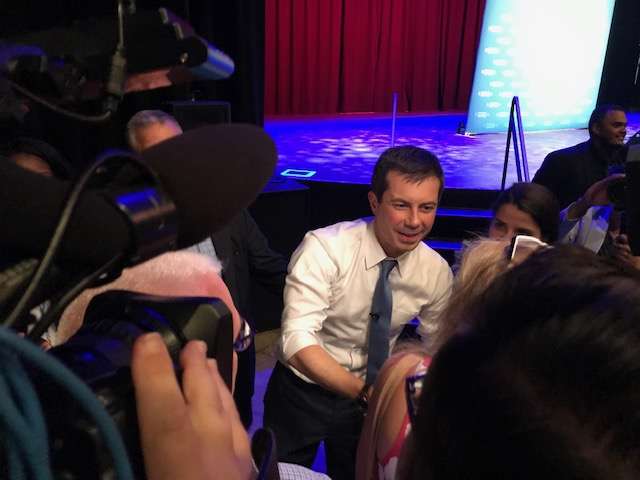 South Bend, Indiana, mayor and presidential candidate Pete Buttigieg spoke to supporters at a campaign stop in Orlando on Wednesday.

Buttigieg says responding to the threat of climate change could be the way the United States gets back in the “game of leading the world.”

He says that would first require the United States to re-enter the Paris Climate Accord and support a carbon emissions tax.

But then he says the academic and public and private sectors working together on solutions could unite the country.

He said young people could support these national efforts by joining the Climate Corps, a service program he introduced during the last debates.

At a @PeteButtigieg campaign event, young people from @mfolflorida got Mayor Pete to confirm that he’ll be at our Oct. 2nd GVP forum in Nevada.

We will show up. We will make our movement loud. We will be a force this Presidential election season.

Joined on stage at the Plaza Live theater by Parkland Mayor Christine Hunschofsky, he also highlighted the need to unite against the threat of gun violence.

Buttigieg says the administration needs to admit the country has a domestic terrorism problem. He also said it needs to fund counter-terrorism efforts at home.

“But of course we know and are reminded again and again the hard way that we don’t have to look far overseas for security threats. America is under attack among other things from white nationalist violence and we got to call it out for what it is.”

The comments come days after two mass shootings in El Paso, Texas and Dayton, Ohio killed more than 30 people and at the same site where singer Christina Grimmie was murdered by a gunman two days before the Pulse shooting.