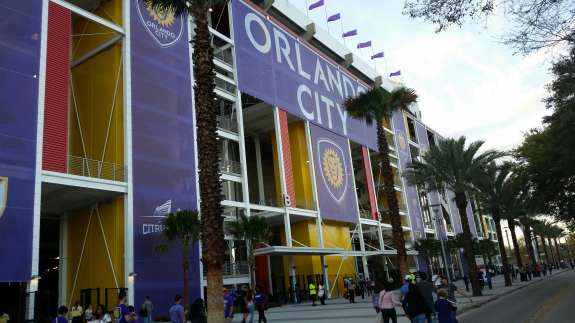 Orlando is embracing its status as an MLS city in a big way. Fans were thrilled with the Orlando City Lions’ 1-1 tie with New York City Football Club yesterday at the Citrus Bowl.

Mayor Buddy Dyer has been working to get state funding for the city’s new soccer stadium. He spoke to 90.7’s Crystal Chavez on the heels of our first MLS game.

Crystal: Mayor, first off, your reaction to yesterday’s game?

Mayor: What a fantastic day for the City of Orlando, there’s so much momentum, so much excitement, the weather was perfect, the game was exciting, the score at the end of the match to secure the tie that was fantastic! Everything going on in downtown last night, the Magic beat the Celtics, we had the ballet at the Dr. Phillip’s Center, so fabulous day in the life of the city.

Crystal: Mayor Dyer, there were reports of SunRail trains filled to capacity. How do you think the city did in terms of traffic control?

Mayor: Well to have our first 62,000 fan experience as well as having a Magic game on the same day, we decided to employ SunRail and I understand it was very well utilized. People used the LYMMO buses to get to the stadium, so I don’t think parking was much of an issue. I think a lot of people spent pretty much all day long in downtown Orlando.

Crystal: Anything that could have been done better?

Mayor: We’ll review everything, we got 17 more home games to go so we’ll review all the transportation issues and the fan experiences but I’ve heard 99 percent positive reviews.

Crystal: Everyone I spoke to after the game said they’d be back. The new stadium will hold nearly 20-thousand people. Is that going to be enough seats? We just saw a showing of 60,000 plus for the inaugural game.

Mayor: We’ll see how the attendance goes throughout the course of the year, you can always anticipate that the first game is going to have the highest attendance, or maybe some of the playoff games, but what I think they might end up doing is playing a majority of their games in the new stadium but playing one or two in the Citrus bowl.

Crystal: Mayor Dyer, what is the outlook for the city securing state funding this year for the new stadium?

Mayor: The legislative budget committee passed it on to the full Legislature and I know we have a lot of support in both the House and the Senate so I’m very optimistic that we will get that done.