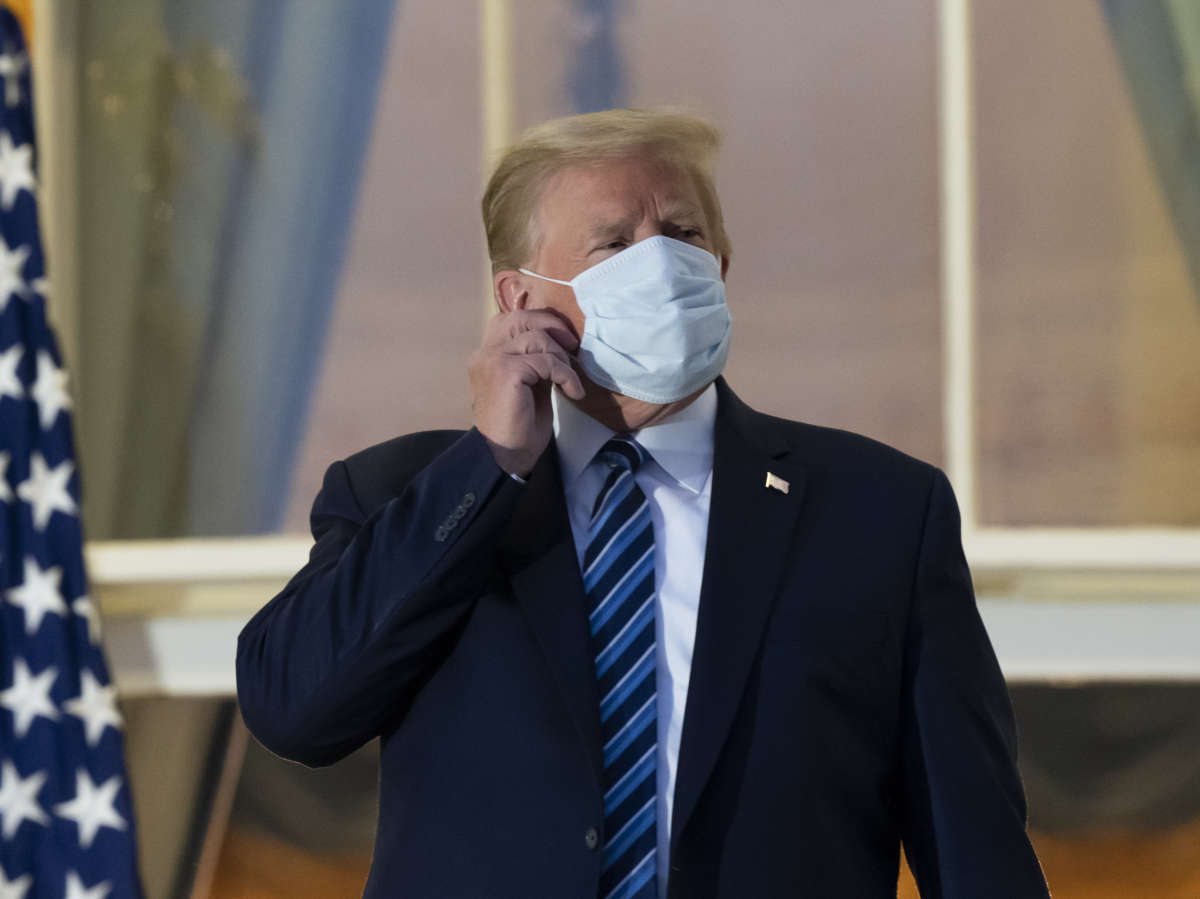 President Trump removes his mask as he stands on the Blue Room Balcony upon returning to the White House on Monday after undergoing treatment for COVID-19 at Walter Reed National Military Medical Center, in Bethesda, Md.
Image credit: Alex Brandon

President Trump, who spent the weekend in the hospital being treated for COVID-19, made a theatrical return to the White House Monday evening, disembarking Marine One and walking the staircase to the South Portico entrance, where he turned to face the cameras, removed his mask and gave his signature two thumbs up.

Shortly before, a masked Trump had emerged from Walter Reed National Military Medical Center, where he was receiving treatment, pumping his fist and giving a thumbs up as he ignored questions from reporters.

In a video recorded at the White House which he tweeted later, the president seemed somewhat more circumspect about a virus that he has often downplayed, along with measures to halt its spread, such as wearing masks.

Trump thanked the staff of Walter Reed and said that during his three-night stay he had “learned so much about coronavirus.”

“I went, I didn’t feel so good,” he said, but added that, “And two days ago, I could have left two days ago. Two days ago I felt great, like better than I have in a long time. I said just recently, better than 20 years ago.”

Trump’s physician, Sean Conley, said he is cautiously optimistic about the president’s prognosis, but that medical staff needed to remain on guard for another week.

“Over the past 24 hours, the president’s condition has continued to improve,” Conley told reporters at a news briefing Monday. “He’s met or exceeded all standard hospital discharge criteria.”

“Although he may not be entirely out of the woods yet, the team and I agree that all our evaluations, and most importantly, his clinical status, support the president’s safe return home, where he will be surrounded by world-class medical care, 24/7.”

The president’s treatment has included the steroid dexamethasone and a five-day course of remdesivir. Dr. Brian Garibaldi told reporters on Monday that Trump would get a fifth dose of remdesivir at the White House on Tuesday night and that he continues to receive a steroid.

Asked by a reporter if he had concerns about a possible worsening or reversal of the president’s condition, Conley responded: “You’re absolutely right.”

“That’s why we all remain cautiously optimistic and on guard, because we are in a bit of uncharted territory when it comes to a patient who received the therapies he has so early in the course,” Conley said.

“The first week of COVID, and in particular the days seven to 10 are the most critical in determining the likely course of this illness. At this time the team and I are extremely happy with the progress the president has made,” he said.

Trump tweeted early Friday that he and the first lady had tested positive for coronavirus just hours after they went into quarantine following a positive test for White House adviser Hope Hicks. Since then, at least nine others in Trump’s inner circle have tested positive for the virus that causes COVID-19.

Critics have charged that the Trump administration’s slow response to the growing pandemic – and the mixed messages coming from the president about the use of masks – helped the virus gain a foothold in the U.S., where it has spread rapidly. The first U.S. case was detected in January, and since then, nearly 7.5 million Americans have become infected, with more than 210,000 COVID-19 deaths – the highest of any country.

In the video on Monday, the president defended his actions regarding the pandemic, particularly his decision to open up the economy even as the disease showed no signs of waning.

“Nobody that’s a leader would not do what I did,” the president added. “And, I know there’s a risk; there’s a danger. But, that’s OK.”

“And now I’m better. And maybe I’m immune, I don’t know. But don’t let it dominate your lives. Get out there. Be careful,” he said.