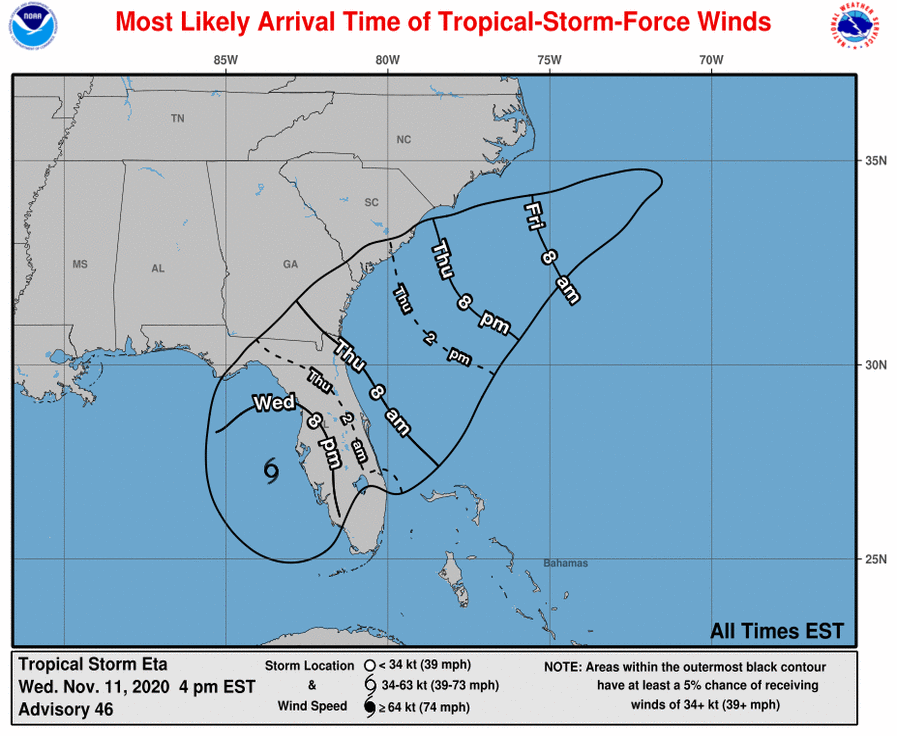 Tropical storm force winds will arrive well ahead of the center of Eta, which is expected to make landfall on the west coast of Florida Thursday morning. Image: NHC

Lake County Schools has announced the closure of classes on Thursday due to high winds from Tropical Storm Eta.

In a press release Wednesday evening, the Lake County district said: “The latest forecast from the National Weather Service indicates 25-35 mph sustained winds starting in the western part of Lake County and moving northeast. Wind gusts of 45 mph are likely with 60 mph gusts possible during the heaviest squalls. Heavy winds present a safety risk for school buses, which start rolling about 6 a.m. each school day.”

School officials also noted the “unpredictability” of timing related to the storm.

“We don’t want to take any chances with the safety of our students or staff,” Superintendent Diane Kornegay said in a prepared statement.

The Sumter County School District has announced that schools will be closed on Thursday due to Tropical Storm Eta.

The district’s 250-day employees, meanwhile, are being told to report at 11 a.m. if conditions allow.

“It was a hard decision, but the school district cannot run school buses in those types of conditions that we’re expecting,” Sumter County Emergency Management Director David Casto said.

They are expecting maximum wind gusts of 36 to 46 mph and .5 to 1 inch of rain, with pockets of up to three inches, as the storm moves through the area quickly.

No shelters or sandbag distributions are planned.

Residents are encouraged to call the Citizen Information Line at 352-369-7500 with any questions regarding the storm.

Marion County Public Schools announced early Wednesday afternoon that its schools will be closed on Thursday because of Tropical Storm Eta.

“This is due to predicted high winds that could make it unsafe for buses to be on the roads,” the district said in a press release.

Wednesday’s after-school activities should not be affected, but families may wish to check with individual schools.