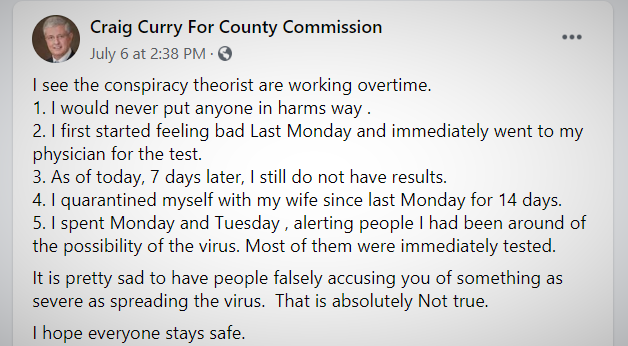 In a Facebook post on July 6, Marion County Commission candidate Craig Curry let the public know he was awaiting test results for the coronavirus. A positive result came back on Thursday.

A candidate for the Marion County Commission announced Thursday that he has COVID-19.

On Monday, June 29, Craig Curry, a 72-year-old Republican candidate for the District 1 seat, started having severe body aches and a fever. He got tested right away but had to wait 10 tough days for results.

The former Ocala mayor and his wife, who also tested positive, have been in quarantine since the onset of symptoms. But in the days before that, Curry was at public events without a mask.

He’s learned a lesson from that experience.

“You know, the mask can be an inhibiting factor,” Curry said. “But you let your guard down and what happens is you get it or you spread it.”

He was at a party in late June where dozens of people, including the new school superintendent, socialized without physical distancing or masks.

A guest of honor, new City Manager Sandra Wilson, did wear one. But she worried, Wilson said, about the absence of safeguards.

On Monday, a week after falling sick, Curry put a statement on Facebook about his case.

GOP opponent Michael Saxe posted on Facebook that the statement came  “one week too late” for the many people at events with him in late June.

Curry said the criticism is “ludicrous.”

It’s a public health issue, Saxe said, not a political one. He says Curry was quick to notify friends, family and business associates.

Both men will face Mike Behar on the ballot in the August primary.