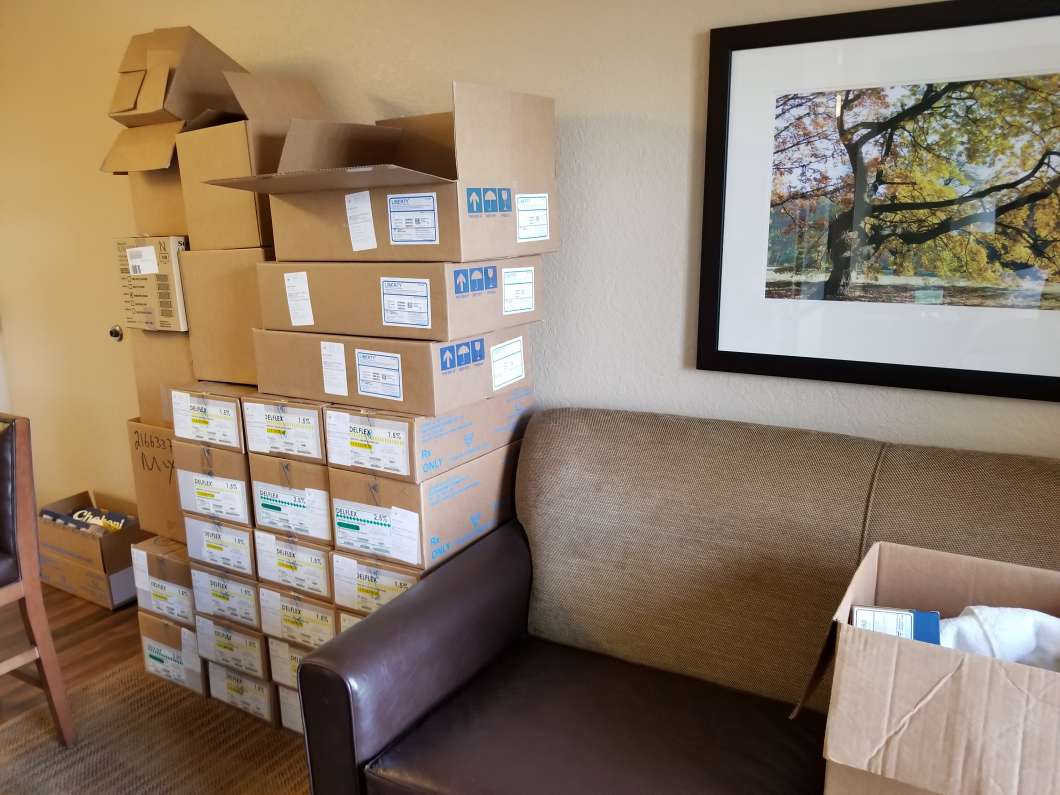 Boxes stack up at Katherine De La Rosa's temporary hotel room. She left the island because Hurricane Maria made her home uninhabitable. Photo by Crystal Chavez.

March 20 was the day FEMA hotel assistance for Hurricane Maria evacuees was scheduled to end. But the Governor of Puerto Rico asked for an extension and FEMA granted it. Now, some evacuees will get to stay in hotels until mid-May.

Who is eligible for this extension will be determined on a case-by-case basis.

Katherine De La Rosa and her mother are living in an extended stay hotel in Altamonte Springs. The FEMA-paid hotel has a small kitchen that quickly turns into the living room. Boxes are stacked high.

De La Rosa’s 76 year-old mother Silvia Russo is on dialysis. One of the main reasons they evacuated the island– plus her electricity was out.

Speaking in Spanish, De La Rosa said the boxes are filled with dialysis supplies. A dialysis machine sits near the bed. It has several clear tubes hanging down and extras coiled on top in a plastic bag.

De La Rosa is her mother’s ’round the clock caretaker. At the end of August, she got training on how to give her mom manual dialysis treatments. Those were required four times a day. That was supposed to be temporary, until they could get a home dialysis machine. Then Hurricane Maria hit in September.

Medical supplies weren’t available in Puerto Rico. And even if they had received the machine, they couldn’t have used it because they didn’t have power. The pair threw in the towel and bought flights to central Florida in early November.

After calls to re-enroll in Medicare here, the mother-daughter pair got the machine.

De La Rosa said thanks to God, because before treatments were four times a day, and with this machine treatment is done once daily. She said that is a huge relief.

At last check, some 3,600 Maria evacuees were still in hotels across the country and in Puerto Rico. FEMA reported a total of nearly 7,000 people from the island got transitional sheltering assistance –hotels stays.

Thousands more came to Florida and stayed with friends and family. But an exact number is unknown.

De La Rosa is what’s known as a “sandwiched” caregiver. She takes care of her elderly mother and her grandchildren. De La Rosa’s 28 year old-daughter also came to central Florida. She’s living with her dad in Sanford and drops off De La Rosa’s grand babies at the hotel while she studies.

De La Rosa does not mind one bit. She said her 9 year-old grandson and his baby brother, who is one and a half, are the light in her eyes.

All of this caregiving is an obstacle keeping De La Rosa from finding work. She is looking for some help to care for her mother so she can find employment. She is stressed and can’t wait till things are stable.

De La Rosa said she misses her house and the island but for her mother’s health and security, she’s decided she will stay here. As long as her mother is around, she will be with her.

They’re hoping to find an affordable apartment. De La Rosa’s mother gets a social security check. De La Rosa said the money would practically all go toward apartment rent, but then there is electricity, water, food and different medical costs.

She is thinking of selling her home back on the island. She figures she won’t even break even. She doesn’t know when she will return to Puerto Rico to get her belongings. Whatever wasn’t damaged by the flood water.