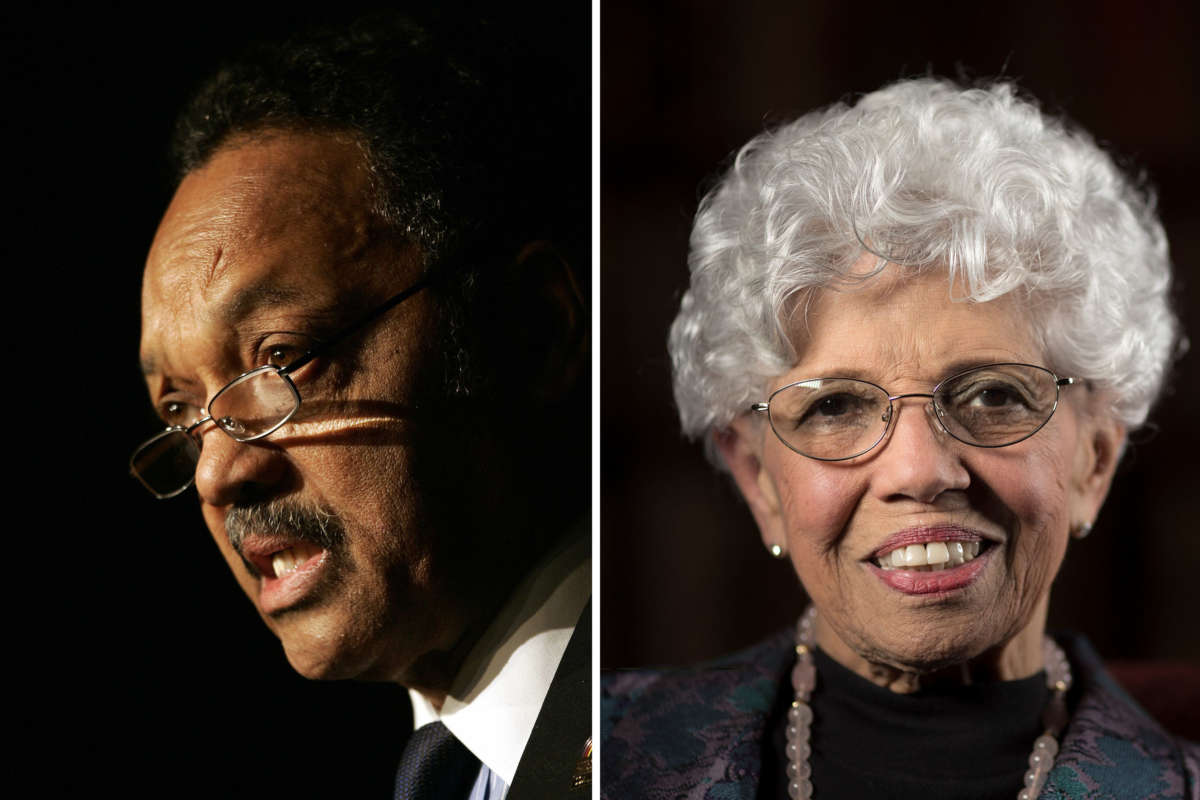 Once again this weekend, protesters filled the streets in cities nationwide, rallying against police violence and chanting the name of George Floyd.

Jesse Jackson and Josie Johnson have a surprising perspective on those protests. He has been a prominent civil rights leader since 1960, she even longer. Both know the unrest of earlier times; Jackson was an aide to Martin Luther King, whose assassination in 1968 set off riots nationwide. And both know the despair many felt after Floyd’s death, which followed the deaths of so many others at the hands of police.

To some who remember the civil rights movement of the 1950s and ’60s, the moment feels familiar. They’ve compared the demonstrations that have spread since video emerged of a Minneapolis police officer kneeling on Floyd’s neck for nearly nine minutes to the nationwide riots of 1968, which followed the assassination of Martin Luther King Jr.

Yet having seen too much, both found hopeful signs in recent days: the number of white people who marched with people of color; the political power that people of color wield today; and even the conduct of police. While the recent demonstrations have featured numerous conflicts with police, Jackson noted that their tactics would have been far more deadly in 1968.

The marches today “are hopeful signs,” says Jackson. “The marchers are full of hope. They believe something can happen. On the move, we’re not going backwards.”

For more perspective on this moment, NPR spoke with Jackson and Johnson for their reflections on the parallels between 1968 and today. Here are excerpts from their Morning Edition conversation.

What do you think when people see an incident like the death of George Floyd and they say nothing has changed in America?

Jackson: To see white and black America rise up and fight back, to see people marching in London and France, that’s progress.

Johnson: That is progress. And we’ve lived long enough to try to be hopeful again. … Not only are we not going backwards — we must hold on to what we’ve learned and encourage, support, protect our children. We have got to help them make a difference so that the next generation — I think about my great-grandchildren … are they going to grow up in an environment which they have to continue to struggle?

Jackson: We dreamed without the right to vote; now we dream with power. We must put in perspective — that’s why violence must be challenged, because violence is a diversion from the real discussion, burning cars as opposed to discussing police behavior. It is also a plot. The right wing will use violence to manipulate America’s emotions. Dr. King was killed in ’68 — the first few days there was a riot. … But Nixon was able to turn the riots … to scare white people and elect himself on a law-and-order basis.

The fact is, the reason why the police aren’t killing blacks en masse is that we have a different quality of politicians. If we had right-wing militaries, they would be turning the police loose to kill people.

Johnson: It’s not possible, given the history of oppression in America, for us to say, “If we change the police, that’s going to make it.” It’s systemic. It’s everywhere. And so we need to educate and train and be encouraged that some of this may work with our police officers, but we also have to encourage, train, educate teachers, governors, mayors, council people. It’s throughout the system.

That’s the pity of it, and we just need to keep on keeping on as a people and not let our generation of young people now feel that it’s not going to work. We’ve got to vote. We’ve got to get our people out there. They make a difference and they know it. And we have got to hold on to the spirit and support of our young people who are the you, Jesse, of 1960s. They can’t let this happen again.