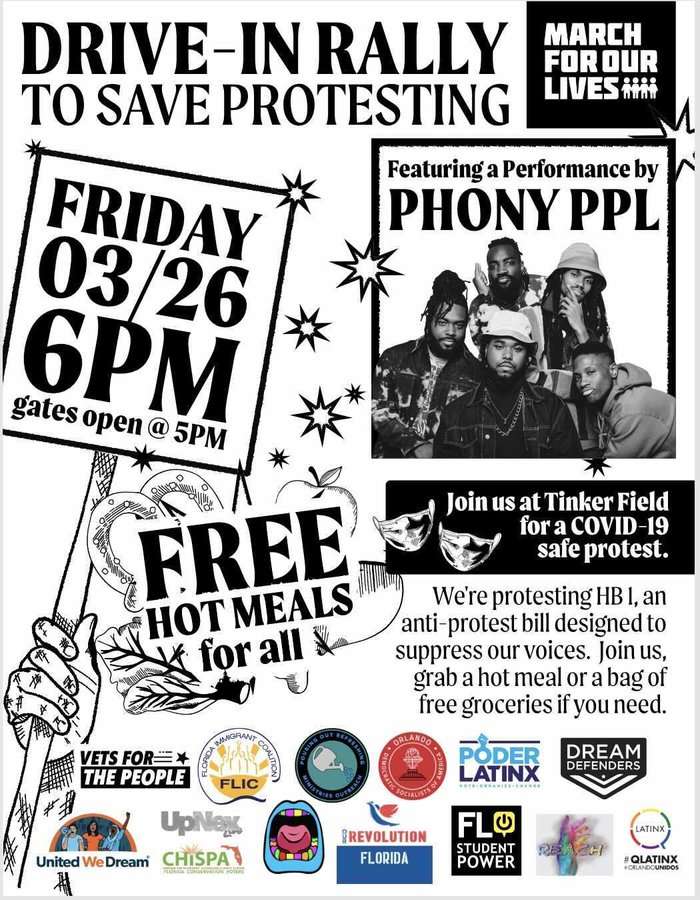 Photo: March For Our Lives

March For Our Lives Florida is organizing a drive-in protest in Orlando against HB1, the anti-rioting bill, the same week the House is expected to vote on it.

PULL UP AND SPEAK OUT! On Friday 3/26 we’re heading to Tinker Field to show Ron DeSantis that he cannot and WILL not silence us with his anti-protest bill! Gates open at 5:00 pm and we will be handing out hot meals and groceries to those in need! Sign up: https://t.co/B6ux0deZco pic.twitter.com/ls82GCN98P

The protest will take place next Friday March 26 at Tinker Field. It will feature state and local officials, organizers and students speaking out against the legislation.

Communications Director Monique Mendez says the group wants to see change in the Florida legislature but criminalizing protesters isn’t it.

“Peaceful protests especially would just be hurt by it and it would be hard to make our voices heard in that respect.”

Mendez says March For Our Lives itself grew out of a protest in Washington, DC after the Parkland shooting. And then there are the Black Lives Matter protests which sprung up around the country this summer.

She says all of these demonstrations are aimed at making Florida better for all of its residents, but that might not be possible if the legislation goes through.

“It criminalizes peaceful protest and hurts Black and brown organizers who are always on the ground trying to enact change for a more equal and just Florida.”

The event is being put on in partnership with other nonprofits like the Dream Defenders and the Florida Student Power network.

Hot meals and free bags of groceries will be passed out to all participants.