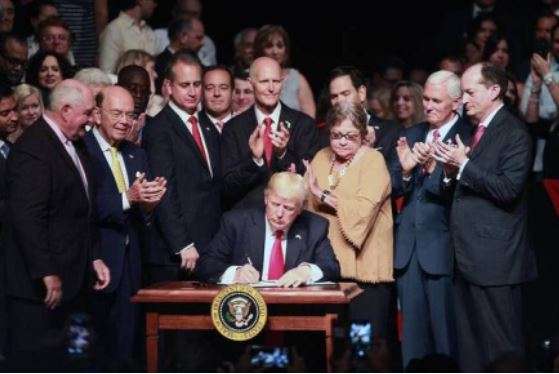 Then President Trump in Miami signing an order to re-tighten sanctions on Cuba in 2017. (Roberto Koltun/ Miami Herald)

Most Cuban-Americans in South Florida backed Trump’s tougher Cuba strategy — and they feel Biden is throwing the regime a lifeline when it’s at its weakest.

As expected, President Biden’s new Cuba policy changes, announced on Monday, have caused a stir this week in South Florida’s Cuban community — where many exiles feel most of all that the timing is dangerously wrong.

Biden loosened many of former President Trump’s restrictions on U.S. engagement with communist Cuba. Among his revisions: lifting the ceiling on money sent to families on the island; allowing flights to cities other than Havana; and resuming people-to-people group travel to Cuba.

Biden also wants to get more aid to Cuba’s private businesses. But many exile leaders in Miami say all of that simply gives aid to Cuba’s dictatorial regime at a time when economically and politically it looks unusually vulnerable — especially after last summer’s unprecedented anti-government protests and the current weakening of one of its major foreign allies, Russia.

“Thinking we can open up independent economic space inside Cuba as a reform tool is one of President Biden’s many flawed assumption,” said Orlando Gutiérrez-Boronat, head of the exile activist group The Assembly of the Cuban Resistance in Miami, which supports Trump’s tighter Cuba isolation strategy.

“You can’t. As long as the [Cuban] regime retains the kind of control it has, it will just enrich [itself] through those supposed independent businesses.

“So I think approaching the regime with a scalpel doesn’t work. You gotta hit ‘em with a hammer — by going for the main pillar, and that’s their political control.”

The Biden Administration says its policy changes are also meant to help relieve economic suffering in Cuba — and, in turn, the current record wave of Cuban immigration to the U.S. But Gutiérrez-Boronat says that’s also a faulty aspect of the Biden approach.

“What the [Cuban] regime has just learned is that once again, they can weaponize immigration and use it to blackmail the U.S. — to get the U.S. to go in the direction they want it to go,” Gutiérrez-Boronat said.

Many exiles also feel Biden did not adequately consult them during his government’s year-long Cuba policy review that led to this week’s announcement. Still, many do agree with his plan to resume Cuban immigration programs like family reunification and to ramp up immigrant visa processing at the U.S. embassy in Havana.