Many children are regularly exposed to gun violence. Here’s how to help them heal 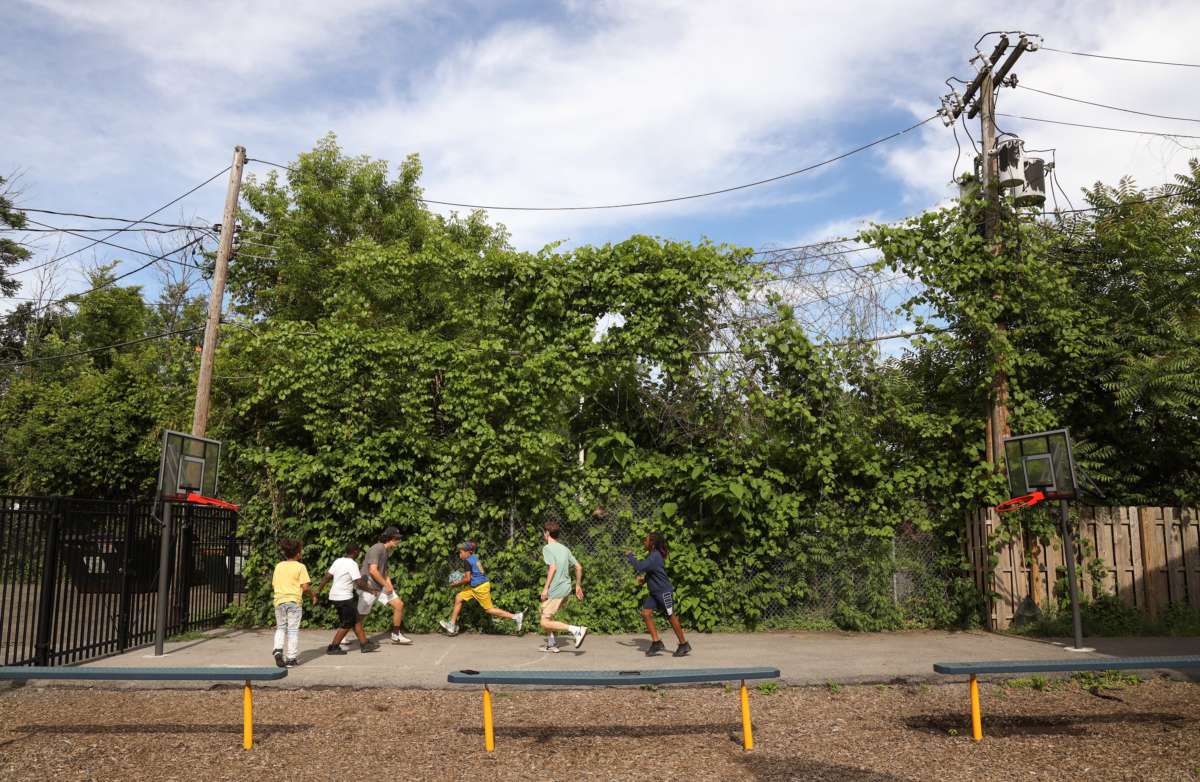 On a spring day, a group of elementary students and their chaperones walk along a sidewalk in the Lyell-Otis neighborhood of Rochester, N.Y. A few blocks away is their destination: Cameron Community Ministries’ after-school program.

The mood is cheerful – some of the kids are leaping or skipping – but their path, which they routinely take, passes more than a dozen spots where murders and aggravated assaults have happened in the last decade.

There’s the block west of here where a 17-year-old boy was shot and killed, allegedly by a classmate, back in March. He’s one of at least six minors who have been killed by gunfire since January, according to Rochester Police.

The students cross Otis Street where, six years ago, a father was shot and killed one morning as children were arriving at the school across the street. According to a report by a local paper that day, a neighbor saw dozens of children run “screaming at the top of their lungs” into the building.

Kaila Toppin remembers it – her sister was there.

“The school went into lockdown because [a student’s] father got shot.”

Toppin, 19, used to be a student with the program at Cameron. Now, she’s a chaperone, and Phyllipp McKnight is one of her charges. He’s been exposed to neighborhood violence, and he’s only in second grade.

“If you don’t know the violence, I’m teaching you right now,” he says. “And when you become 6 years old, like me, I don’t want this dark future that happened to me.”

Many children like Phyllipp, who are regularly exposed to community gun violence, can struggle with feelings of hopelessness and anxiety. They can also have difficulty regulating their emotions – all symptoms of post-traumatic stress, which can have lasting impacts into adulthood.

But there’s a lot communities and after-school programs can do to help.

Riana Elyse Anderson, who studies child trauma and Black families at the University of Michigan’s School of Public Health, says the key is to create supportive environments for children.

“The more you have supportive structures around you – like family, like peers, like adult mentors – the better chance you have of … surviving because you’re active and engaged and perhaps in spaces that may be a bit safer.”

Those supportive structures also help children shed challenging psychological beliefs, like life ends in your teens or life has little value – beliefs that can be reaffirmed by fatal neighborhood shootings.

Anderson says one way to get those supportive structures in place is through after-school programs, which not only keep kids supervised and off the street, but can also help children and teens learn about their strengths, dreams and culture. Most of all, it can help them see that life is valuable.

Cameron Community Ministries’ after-school program does this through mentoring, field trips and team-building activities. Luis Mateo, a youth program director, says he also teaches his students leadership skills, guides them through community-oriented projects and steps in when students are going through something heavy – like after the recent mass shooting in nearby Buffalo, or after a neighborhood incident.

“I had two kids that were just, like, stunned because a friend of theirs was shot,” Mateo recalls. “He lived but it was still traumatizing… So I talk with them, make sure they’re OK while that was going on. And on that street, too, another child was shot coming off of the bus. So it’s been a lot of violence, and unfortunately, they’ve normalized to it and it’s just another day in the neighborhood for them.”

Helping kids cope with their harsh reality is important, but Mateo says his youth program also prioritizes giving children and teens space to be themselves, be safe and explore their interests.

How neighborhood violence and aggression interrupts happiness and joy

Phyllipp McKnight’s mother, Lerhonda McKnight, is one of a few guardians at Cameron Community Ministries’ summer cookout in August. She cleans up after the kids and keeps an eye out for mischief – like the boy shaking up a soda can, getting ready to spray it open.

“Hey! Don’t do that. Don’t do it,” McKnight warns with a laugh. “Put it down, let it sit for a couple minutes. Caught ya!”

Like Kaila Toppin and Phyllipp, McKnight also grew up exposed to neighborhood violence. She says she’s been through things that she doesn’t want her kids to ever experience, so she stays involved, brings them to Cameron, and makes sure to show them love.

Across the street, a fight breaks out. There’s yelling and physical threats. McKnight barely acknowledges it. Around here, but not just here, violence and aggression have become as commonplace as inclement weather.

Kaila Toppin says she’s seen more than enough of it for a lifetime.

“It makes being happy and joyful, like it interrupts it sometimes. Like in the back of my mind, you know?,” Toppin says. “I’m out there having a good time but sometimes it just makes me think something bad could happen, because of all the bad things that happen. I don’t know, it makes it different and it also makes it a cautious joy.”

Toppin’s vigilance is a matter of survival. It’s what drives her to protect younger kids, so that they’ll have a chance to experience life after childhood.