Man Who Killed Officers Told Passersby: ‘Watch What I Am Going To Do’ 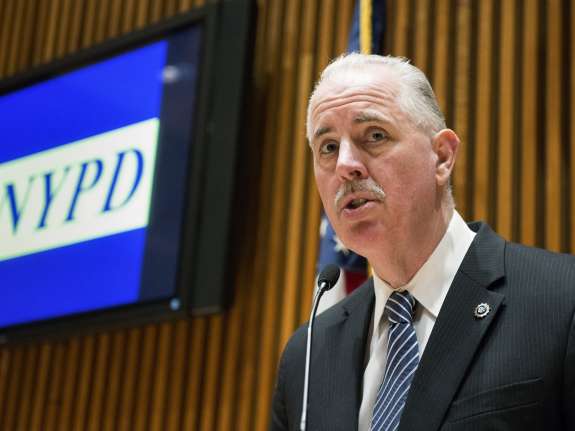 The gunman who killed two officers in a Brooklyn neighborhood of New York on Saturday told passersby moments before the shooting to “watch what I am about to do,” a senior police official says.

NYPD Director of Investigations Robert Boyce, speaking at an afternoon news conference about the killings that have rocked the city, said the shooter, identified as Ismaaiyl Brinsley, briefly spoke to two people on the street in the Bedford-Stuyvesant area where the assault took place before proceeding to a patrol car where he shot officers Rafael Ramos and Wenjian Liu.

He “asked their gang affiliations, said ‘follow me on Instagram,’ and then ‘Watch what I’m going to do,’ ” Boyce said.

The official said a review of Brinsley’s social media accounts — including Facebook, Instagram and Gmail — found “postings and rants” that showed “anger against the government.”

“There was one where he was burning a flag,” Boyce said, adding that in other posts he had mentioned Michael Brown and Eric Garner, two black men who were killed in encounters with police in recent months, in Ferguson, Mo., and New York City, respectively.

Boyce said Brinsley had “no gang affiliations” and made “no religious statements” on social media. He was estranged from his family, which is Muslim, Boyce said, but police are told he showed “no signs of radicalization.”

The official said he had 15 prior arrests — some in Ohio in 2009 and others in Georgia in 2013, mostly for robbery and misdemeanor theft.

His family says he had attempted suicide in the past, including trying to hang himself last year, Boyce said.

Boyce said that before 6 a.m. on Saturday, Brinsley let himself into his ex-girlfriend’s residence in Maryland with a key he was not supposed to have. She confronted him, an argument ensued, and the woman called her mother. That’s when a shot was fired and the woman was hit in the abdomen.

Brinsley then took the woman’s cellphone and left, Boyce says. Brinsley later called her mother to tell her “he’d shot her by accident and that he hoped she survived.”

He called the mother several more times as he was apparently on a bus en route from Maryland to New York.

Boyce said there were 10 eyewitnesses and 35 “earwitnesses” to the crime, and at least five videos were recovered of Brinsley’s movements as the day transpired.

He said Brinsley’s cellphone and the one he took from his girlfriend were both recovered and that a warrant was being sought to search them. “They are iPhones; we expect pictures,” he added.