Man Hits Protesters With Truck In Downtown Tallahassee. TPD: No Arrest Made Yet As State Attorney Reviews Evidence 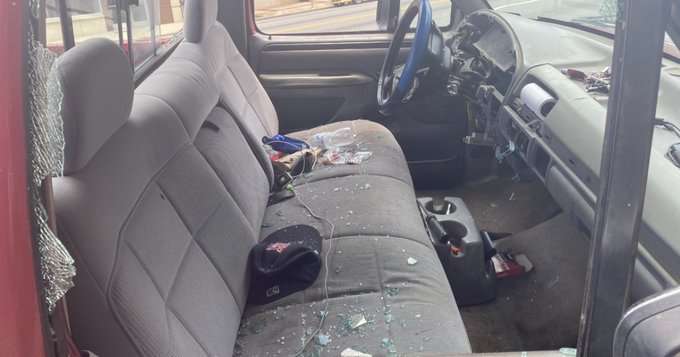 Pictured is the interior of a red truck that ran into protesters in downtown Tallahassee on Saturday, on Monroe Street. Tallahassee police have not yet arrested the man who was driving. The truck had a Georgia license plate. Photo: Ryan Dailey

During what Tallahassee police called a peaceful protest this afternoon in Florida’s capital city, the driver of a red truck accelerated into a group of protesters on Monroe Street downtown.

Hundreds gathered on the lawn of the Old Capitol building in Tallahassee just after noon. It was one of many demonstrations nationwide Saturday held in the wake of George Floyd’s death, an unarmed black man who was killed by a Minneapolis police officer, now arrested and charged with third degree murder.

Protesters were also chanting about a rash of violence locally, which includes the killing of 38-year-old Tony McDade by a Tallahassee police officer. McDade, who identified as transgender-male, is also accused of killing 21-year-old Malik Jackson in a stabbing Wednesday. The Tallahassee Democrat reports three more people have been injured and one killed in shootings since then.

But as the crowd began to march north up Monroe Street, a group of protesters surrounded a red truck. The truck accelerated, hitting several protesters. The truck had a Georgia license plate.

Some protesters at the scene told WFSU that at least one person was hurt. Police are saying there are “no known injuries.”

Several eyewitness videos circulating on social media show a white male being detained by police, as officers tried to keep protesters back.

TPD has since released a statement about the driver, but the agency had not said whether an arrest had been made as of Saturday afternoon:

“This morning, as a peaceful protest was occurring downtown along Monroe Street near the Capitol building, a vehicle proceeded into the crowd. The driver was immediately detained. As of this time, there are no known injuries.

This is an extremely tense, emotional time across the nation. Mutual respect among all of us is vital. The Tallahassee Police Department supports the nonviolent gathering of protesters and will uphold their constitutional right to do so, while making every effort to maintain a safe environment for our community. We are asking anyone with information, including video, to please contact TPD. Once the investigation is complete, all information will be forwarded to the State Attorney.

Additional details will be made available as the investigation into this morning’s incident continues.