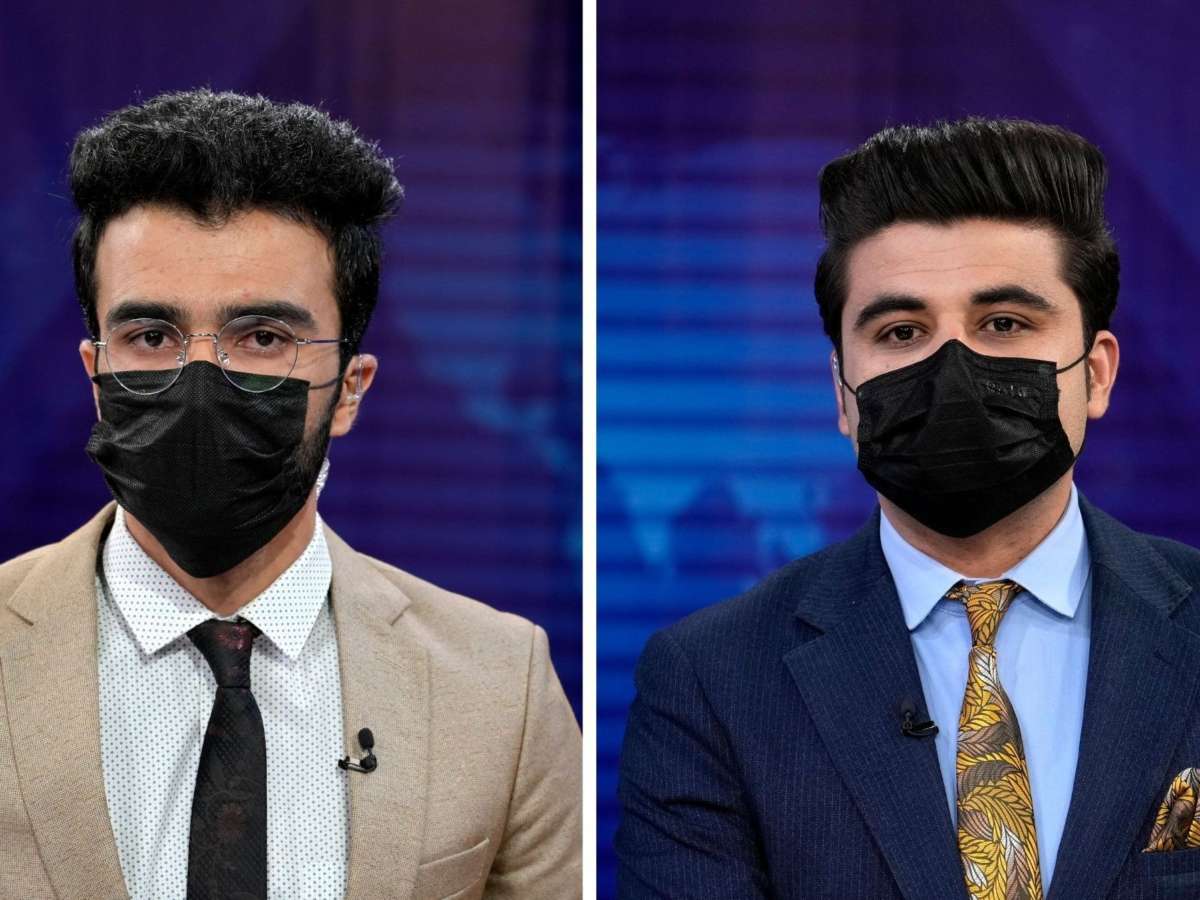 Television journalists in Afghanistan have started covering their faces on-air in recent days — some by force and others by choice.

Taliban officials announced earlier this month that all women and girls must leave home only when necessary and wear head-to-toe clothing when out in public.

These are among the harshest restrictions the group has introduced since returning to power in August — and a seeming confirmation of many Afghans’ fears that the Taliban hadn’t changed much since the last time they ruled from the mid-1990s to 2001.

The Taliban went a step further on Thursday by specifically ordering female TV news anchors to cover their faces while on air.

The decree only affected a handful of women who work as television presenters in Afghanistan, but it triggered a large social media response.

That was perhaps because the decree dealt a powerful blow to a visible, symbolic mark of progress Afghans had made in two decades of Western-backed rule: women on television, authoritatively presenting information.

A leading Afghan human rights activist who now lives in exile said the Taliban’s micropolicing of women in a country grappling with multiple humanitarian emergencies provided an insight into the Taliban’s worldview.

“In one of the poorest countries in the world, a country where children are regularly victims of explosive remains of war, a country still battling polio, not a campaign against hunger, explosives, disease, but one against women. Taliban priorities. #Afghanistan,” tweeted Shaharzad Akbar.

The decree raises worries about even stricter measures targeting women

Their decree raised a host of concerns, not only about women’s freedom of expression but about whether they would be able to continue doing their jobs.

Some women began questioning whether the veiling order was a prelude to being ordered off air entirely, because many conservative Muslims consider a woman’s voice to be sexually arousing — and therefore should not be heard in public.

There was mixed compliance at first, which prompted the Taliban to begin enforcing the order over the weekend. Its Ministry of Vice and Virtue said “the decision was final and that there was no room for discussion.”

The news readers were likely confused because the same ministry has not yet implemented its earlier, broader decree on women and pubescent girls covering their faces or wearing a burka in public. It appears the hardline ministry may have wanted to set an example with women who appear on Afghan airwaves first.

Most female anchors have since been seen with their faces covered, according to the Associated Press. But so have many of their male colleagues, who have donned face masks on air in solidarity.

Male anchors at several prominent outlets, including TOLOnews and 1TVNews, have been broadcasting while wearing face coverings. And thus was born the social media campaign #FreeHerFace.

Human Rights Watch is urging more people, including diplomats meeting with the Taliban, to show support for the campaign and speak out in favor of women’s rights.

“Women journalists are just the latest casualties in what has become the most serious women’s rights crisis in the world,” the organization added. “But the Taliban are not immovable, and coordinated pressure has the potential to impact their decisions.”

Many anchors have expressed concern that they won’t be able to perform their jobs adequately from behind a mask.

Two female TOLOnews anchors, for example, remarked that it would be difficult to lead hours of programming with their faces covered. One questioned how much the mask would affect her ability to breathe and speak, while another said “we were not ready mentally and morally that such things would be forced on us.”

They worry about their job security as well as the experience of their viewers. HRW expressed similar concerns in a press release on Monday.

“The rule blatantly violates women’s rights to freedom of expression, as well as personal autonomy and religious belief,” it said. “It will also prevent access to information for people who are deaf or hard of hearing who lip read or rely on visual speech cues to help them understand people speaking.”

In a video tweeted and translated by Amnesty International, an unnamed female journalist spoke about how important it is for anchors to feel calm while delivering the truth to viewers, and said presenting in a mask had the opposite effect.

“If such decrees are issued and imposed on women, the women across Afghanistan will be eliminated,” she added. “As we see now that women are being gradually eliminated.”

Many Afghan female journalists have faced discrimination and left their jobs since the Taliban’s takeover.

Fewer than 100 of Kabul’s 700 women journalists were still formally working at privately owned radio and TV stations immediately after the Taliban takeover, according to a report from Reporters Without Borders and the Centre for the Protection of Afghan Women Journalists.

Male Afghan journalists are among those expressing solidarity

The mask order is among many challenges that female journalists face while working in Afghanistan.

Several spoke with Al Jazeera about being barred from press conferences or having interviews canceled because of their gender, but vowed to keep reporting despite the growing difficulty.

“I can’t quit,” said one woman, whose name was changed to protect her identity. “Because we are the voices of those who are not allowed to go to schools, universities and work. If we leave, who will speak for them?”

Some male anchors have spoken to media outlets about their decision to mask up.

“We stand beside our female colleagues and protest this order because we know how difficult it is to present on TV with your face covered,” Idrees Farooqi, chief editor and head of news at 1TV, told Al Jazeera.

An anchor on a private TV channel, who asked not to be named because of security concerns, told The Guardian that he and other male colleagues had been wearing masks to work for two days, even though it made him feel “like someone has grabbed me by the throat and I cannot speak.”

Still, he said they would keep wearing masks until the Taliban reconsiders.

Human rights activists are praising male journalists for covering their faces and noting the significance of their public show of support.

“Afghan men showing up for Afghan women is not just a gesture,” tweeted Mina Sharif. “It’s a turn in the story that will change everything.”

In a separate tweet, she called it “a bare minimum first step” in the right direction.

Sahar Fetrat, an Afghan activist and Human Rights Watch researcher, told The Guardian that male journalists wearing face masks is “one of the few instances where Afghan men are doing something symbolic because all the resistance and protests against the veil so far has been by women.”

And she, like many others, wonders where the campaign will go from here.

“The question is would they wear a hijab? Would they cover themselves in a burqa if they were asked to?” she added. “But how far will you go? The whole country wearing the burqa? And what do we do with that anger and emotion? Where does it take us? These are important questions.”