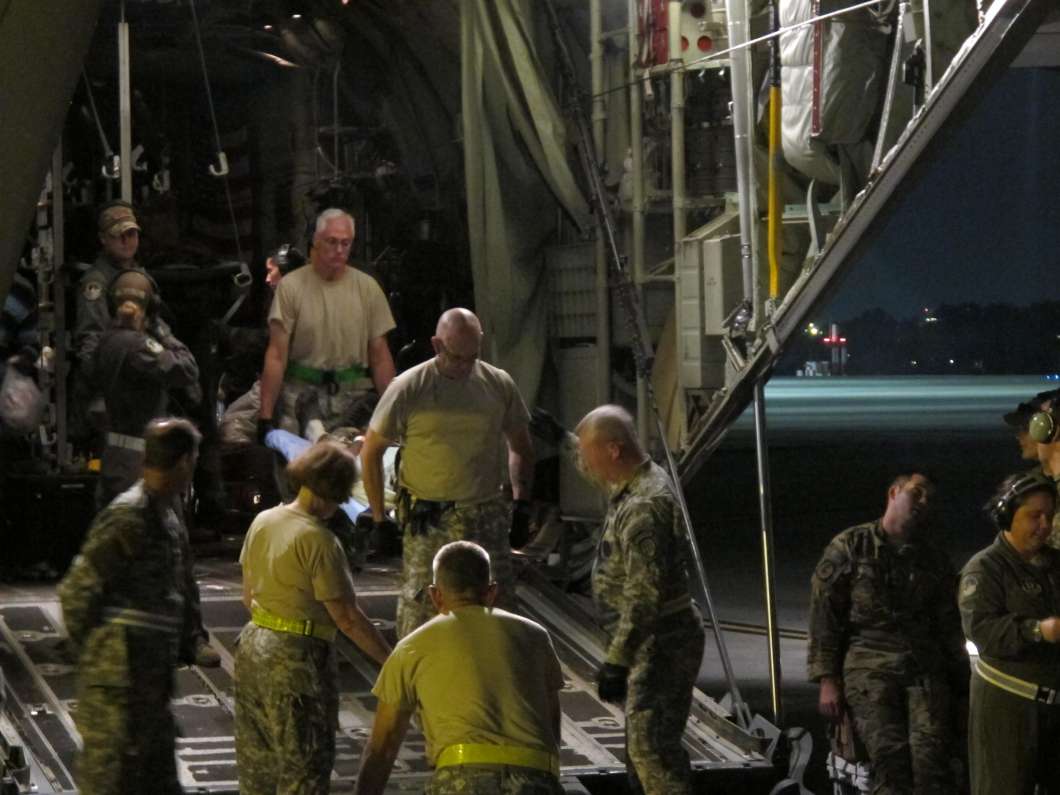 Crews on the ground in Atlanta take a patient from St. Croix off a C130. /Photo: Julio Ochoa WUSF

As the Caribbean recovers from Hurricanes Irma and Maria, the 45th Aeromedical Evacuation Squadron is doing what it’s known for: dropping in on emergencies.

The C130’s four propeller engines scream as it lifts off from MacDill Air Force base in Tampa.

The plane is loaded with pallets of medical supplies bound for St. Croix, nine days after the largest of the U.S. Virgin Islands took a direct hit from Hurricane Maria.  But the flight’s true mission is getting patients in critical need of health care off the island and into hospitals in Columbia, South Carolina and Atlanta.

So far, hundreds of patients have been brought to those hospitals along with facilities in Louisiana and Mississippi. Capt. Michael Plash is in charge of the flight crew. He spoke from the plane’s flight deck on the approach to St. Croix.

“It’s a massive operation that’s going on,” said Plash. “We have aircraft in and out, left and right, I mean it’s crazy.”

It’s the crew’s second mission to the island in three days. Maria blew down buildings, disfigured trees and left a field of debris across St. Croix. Much of the island is without power and running water.

Four Hours After Takeoff The C130 Touches Down

The engines keep running as a forklift removes the pallets of supplies. The crew then quickly converts the plane’s fuselage into a mobile emergency room. Stretchers stacked three high run down the spine. Bags of medical equipment hang from the walls. Machines monitor vital signs.

Nine patients, some in wheelchairs, others on stretchers, board the plane, and the medical staff starts caring for them. Capt. Keri Lord-Morales leads the medical crew of flight nurses, doctors and a special critical care team.

“We have patients who have chronic illnesses that require dialysis and we have other things such as wounds that we are dealing with and mental health issues as well,” she said.

Earl Shervington, is one of the dialysis patients heading to the mainland. The 61-year-old, who was born and raised in St. Croix, has failing kidneys and depends on machines to clean his blood three times a day. Sitting on a stretcher inside the C130, Shervington said officials feared the hospital where he received dialysis would lose generator power.

“So what the government decided is to ship us out to somewhere that we can seek better help,” said Shervington, “which I think was a very good decision and a very good idea.”

Treating patients in the air comes with challenges that caregivers don’t have on the ground, said Lord-Morales. There’s lower oxygen levels, temperature fluctuations and vibrations that can effect pain.

Crew Members Come From Across Florida

The members of the medical crew are reservists and many were working at hospitals throughout Florida when they got the call to serve.

Capt. Sandy Mandell is a trauma nurse at Orlando Regional Medical Center. Much like the staff in an emergency room, she says, the medial flight team doesn’t typically know what types of patients they’ll be treating ahead of time.

“We were told we were getting one patient load on the way down and we showed up and it completely changed, so flexibility is like a huge part of our job,” said Mandell.

During the flight, a nurse on the plane coordinates with the hospitals in South Carolina. When the C130 touches down in Columbia, crews on the ground take over.

A second trip to Atlanta an hour later drops off the remaining patients. After roughly 12 hours of work, the crew can rest for the night.

The next day, the team returns to MacDill. There, another crew is already set to go, ready to rescue another group of patients.