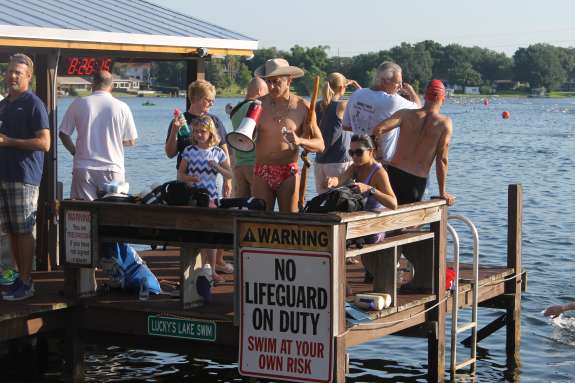 For the last 25 years, six mornings a week, a group of swimmers has crossed Lake Cane in West Orlando. A daily swim that Dr. Lucky Meisenheimer began as a workout for his friends now attracts swimmers from all over America- and around the world. The silver anniversary of Lucky’s Lake swim took place over the weekend.

A blast on a Klaxon and 460 swimmers hit the water.

“Been doing it since he’s a puppy.”

Davis himself has completed the swim more than 1,000 times.

Some swimmers wear speedos and sleek swim suits. Some have flippers and snorkels. Many of them wear green hats and orange floatation devices clipped to their waists. Those are the swimmers who are crossing the lake for the first time.

Dr. Lucky Meisenheimer stands on a dock, wearing a red speedo and a cowboy hat. In one hand he waves a megaphone. In the other hand he holds a wooden staff carved with snakes.

Lucky didn’t get his nickname avoiding alligators- or snakes- in Lake Cane.

“Well I guess that’s one reason to call me lucky,” he said.

“but no, Lucky was just a college swimming team nickname that kind of stuck.”

He bought this lake front house in 1989, just so he could swim in the lake.

The World Open Water Swimming Association now ranks it one of the top one hundred swims in the US.

It’s also caught the attention of the Historical Society of Central Florida. Before the swim, the society’s board president Mark Line made a proclamation. Lucky’s Lake Swim is now a historic event. It’s the first time the society’s given an event a historical designation.

Kimberlee Riley, of the Orange County History Center, a swimmer herself, said it’s community outreach for the society: “to help share those stories and really celebrate the history we have here in Central Florida.”

And everyone swimming has a story – like Leny Debler.

“Well, after almost being attacked by three gators, in Lake Butler, I decided it was time for me to learn how to swim,” said Debler.

“I joined a beautiful group of friends and I started swimming and this has been a wonderful place to come and train and practice.”

Candy Crowe used to be a competitive water skier,  so she’s used to being in lakes.  She started swimming here a year and half ago, and has since completed the swim 130 times.

“Sometimes you can wake up and you’ll do a crossing, and the moon will be on one side and the sun on the other side,” said Crowe.

For first timers, there’s a ritual: sign a waiver, grab a green hat and an orange floatation device. No exceptions, whether you’re a novice- or a triathlete and swim coach like Meredith Sauls.

“Yeah this my first time, it was on my bucket list,” said Sauls.

“I’ve heard about it from other people that it’s a great swim.”

And once you make the crossing- one kilometer there and back-  sign the wall of Lucky’s house.

“So my signature’s on the wall somewhere, from nineteen years ago,” she said.

“It’s dark and you wonder what’s underneath you. You might feel weeds coming up and you’ll kind of wonder what those are,” he said.

Ramos said seeing the other swimmers helps you stay on course between the buoys.

And the camaraderie keeps him coming back.

“Lucky is just a terrific guy. He opens up his back yard six days a week, on the clock, rain or shine.”

“I kind of figured I’d be swimming here most of my life, because that’s why I moved here,” said Meisenheimer.

“I just have a lot more friends than I thought I would ever have.”

Lucky Meisenheimer directs swimmers from his dock on Lake Cane

The start of the swim

Signing the wall of Lucky's house