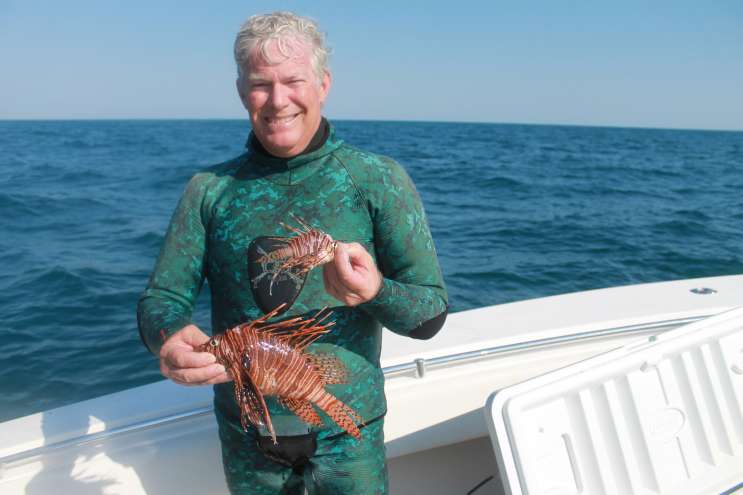 With no predators and a never-ending appetite, the lionfish threatens Florida’s multi-billion-dollar seafood industry.

This non-native fish has spread in Florida coastal waters at an unprecedented rate and is multiplying up the Atlantic coast.

That’s why Floridians are cracking down on the lionfish and cooking it up.

Dave Garrett grips his mask and falls backward into the Atlantic Ocean.

Garrett is an Ormond Beach scuba diver and commercial fisherman. He emerges from the rolling sea southeast of Ponce Inlet almost an hour later with some flounder and 38 lionfish.

He takes up one of the rust-and-white zebra-striped fish by its head, avoiding the 18 venomous spines that sting like a bee. The fish is a little larger than the size of his hand.

“You can see how big his belly is. He just eats and eats and eats, and they swell up. And then they eat more. And they’re eating all of our native fish down there, the snapper and grouper.”

Never have Florida coastal waters experienced an invasive species like the lionfish.

Its population here has exploded since it first was reported off of south Florida’s Atlantic coast in 1985. A lionfish can release up to 30-thousand eggs every four days, repels all predators with its spines and can survive in shallow water or deep water up to a thousand feet.

To get rid of this damaging species the Florida Fish and Wildlife Conservation Commission announced new incentives for catching 50 or more lionfish. They’re giving away T-shirts and honoring fishermen with a place in its Lionfish Hall of Fame. Whoever bags the most fish will be crowned Florida’s Lionfish King or Queen.

Garrett says it’s not enough. He established Lionfish Eliminators, a non-profit aimed at raising money to pay fishermen for removing the fish.

“The number of lionfish down there eating all of our native fish, and to just ask volunteers to go out. They are making an impact. Every lionfish killed is helping out the environment. But I don’t think we have enough volunteers to actually make a difference.”

At Dimitri’s Bar Deck and Grill in Ormond Beach vegetables sizzle. Here Garrett’s lionfish are on the menu with a side of fries.

Sous chef Marco Novella snips off the fish’s venomous spines with a pair of scissors.

He seasons the fish.

Novella then deep fries the fish whole for about a minute. He tops off the lionfish with some Greek dressing for added flavor and finishes it off in the oven.

“It should be done by now. So we’re just going to take it out of the oven.”

He serves up the lionfish with some vegetables and rice.

And I did. The happy ending here is that lionfish are delicious. The meat is white and flaky, like that of a yellowtail snapper.

The solution to Florida’s lionfish problem might be creating a market for it.