Love In the Air at ‘Camp Widow’ 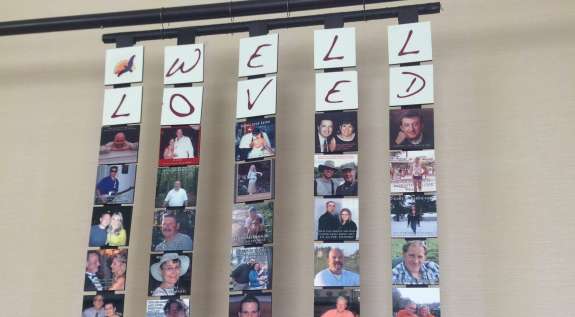 Tanya Villanueva Tepper was thinking wedding plans — not widowhood — the morning of September 11, 2001.

Her fiance, a New York City firefighter, was among the thousands killed when the Twin Towers were attacked. She was forced to learn how to live every day without her Sergio.

“I remember those first Valentine’s Days without Sergio. There’s nothing that makes your loss more apparent, screaming in your face, than a day dedicated to love, and partnership, and marriage and you know…soulmates,” says Tepper.

The Miami resident helped lead a group of 150 who celebrated lost loved ones at a downtown Tampa hotel last week. The Soaring Spirits International event is designed to be uplifting. Camp Widow includes a lot of laughter, even a Saturday night dance.

Founder and Director Michele Neff Hernandez says the date of this 11th Camp Widow was intentional. “I feel like we have the Love Story. Right? When you love someone up until the very end of their life, that’s the love story. So when you have that, why is it that we’re not honoring that? Why are we not marking that for this day of love?”

Fiesta Jarvis of Lakeland lost her husband four years ago after a long illness. She’s one of the Tampa area group leaders, setting up get-togethers and running the Facebook page – a place where a lot of widowed people first find kindred souls.

“We post things on the group, some from the national site and some just things that we see, that helps you to know that you are not alone. And you can kinda see. Then once you join the group you will connect with other people,” says Jarvis.

Joyce Sterner of Bradenton says that online community helped her survive after her husband died in 2011. She was still working full time and didn’t relate as well to retired members of her other support group.

“You go on and you read what people write about how they are feeling and a lot of the times when I read it, I said – ‘Oh Wow, I feel like that. I’m not the only person who feels like that. I’m not…crazy.’’ There are other people who have the same feelings that I am going through,” says Sterner.

For Sterner, that meant stepping outside a world that had focused for years on an ailing husband. Last year, her Camp Widow friends convinced her to try skydiving. “And when you go with other widowed people, we kind of understand each other. Other people who haven’t lost a spouse say they understand, but until you’ve been in it, you don’t.”

Hernandez says Camp Widow offers a safe place where people won’t be told to get over a loss that happened years ago. Instead, it’s a time to celebrate fond memories and move forward.

For Hernandez and others, that may include discovering a new love. That’s what happened to Tanya Villanueva Tepper. “I always honor Sergio. I have a Facebook page for Sergio. I still have a very good relationship with his family, with our friends. He’s still very much a part of my life. I’m probably a little more careful though because I do have my husband, Ray, that Sergio doesn’t occupy my Valentine’s Day. My Valentine’s Day now is about Ray and my daughters.”

These widows know that on this Valentines Day, there’s plenty of room to love them all.