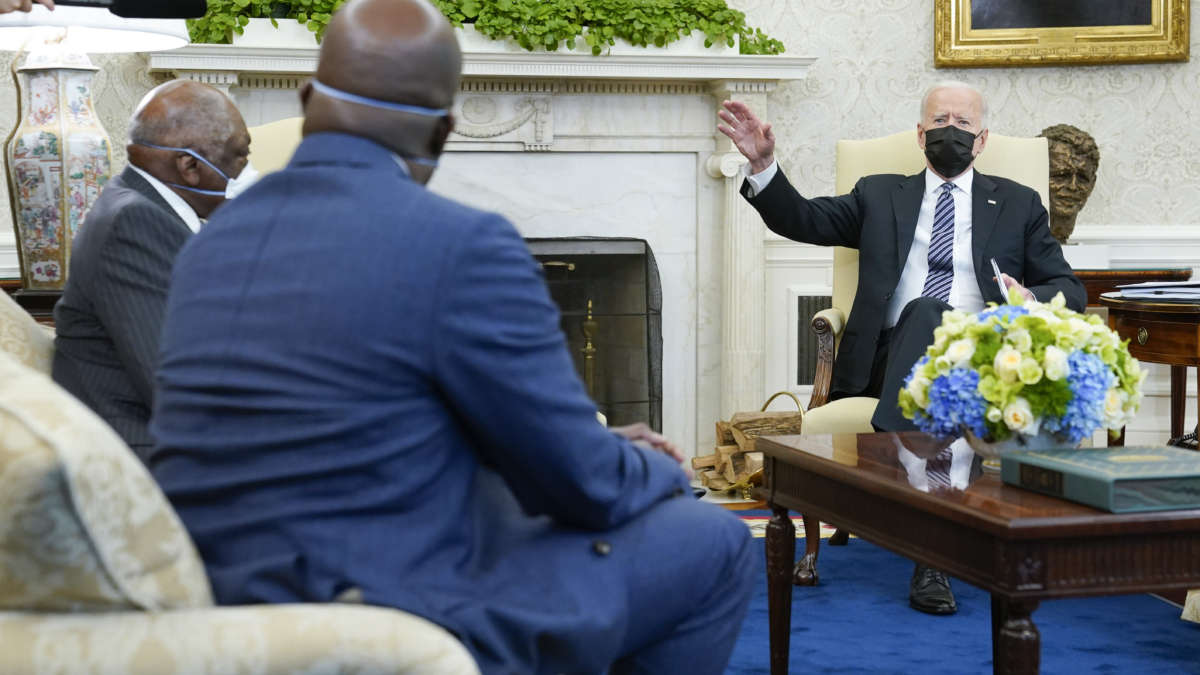 President Biden meets with members of the Congressional Black Caucus in the Oval Office of the White House on April 13.
Image credit: Patrick Semansky

When Joe Biden offered his condolences to the loved ones of George Floyd in a video address that played at Floyd’s funeral service last year, he posed a question.

“Why, in this nation, do too many Black Americans wake up knowing they could lose their life in the course of living their life?” Biden asked.

Biden, then his party’s presumptive presidential nominee, urged the country in that speech to use Floyd’s death as a call for action to address systemic racism.

“Now is the time for racial justice. That’s the answer we must give to our children when they ask why,” Biden said in the video. “Because when there is justice for George Floyd, we will truly be on our way to racial justice in America.”

As the jury deliberates in the trial of former police officer Derek Chauvin, who has been charged in Floyd’s death, the looming verdict could be the first significant flashpoint over race and policing in Biden’s presidency.

The conclusion of the trial could also compound a moment of intense pain over police killings in the United States. Biden is expected to speak after the verdict, and the president may try to heal the soul of a divided nation. But he also appears caught in a double bind.

Biden has pledged to help end the epidemic of Black men being killed by police, but aside from the policing overhaul bill named for Floyd that is currently stalled in Congress, Biden does not yet appear to have a clear agenda to deliver on his promise of making real change in policing in communities of color. At the same time, the president has presented himself as an ally of the law enforcement community.

“The question for those in power is not about how much more talking or how much more coming together we need to do while Black people are being killed,” said Rashad Robinson, the president of Color of Change. “And there’s always questions about whether or not there will be any level of accountability for it. This is not a time for more conversations. This is a time for action.”

Biden met with members of the Congressional Black Caucus in the Oval Office last week after the prosecution rested its case in Chauvin’s trial in Minneapolis. That meeting also came amid protests and outcry after a police officer in Brooklyn Center, Minn., killed a Black man during a traffic stop.

Law enforcement officials have said that then-officer Kim Potter, who has since resigned, mistook her handgun for a Taser when she fatally shot Daunte Wright, a 20-year-old Black man, last week.

Ahead of the meeting with Black lawmakers, Biden referred to the killing of Wright as “that god-awful shooting” resulting in Wright’s death, as well as the uncertain verdict in the trial over Floyd’s death.

“But we’re in the business, all of us meeting today, to deliver some real change,” he said.

Rep. Brenda Lawrence, D-Mich., was one of the lawmakers in that meeting, and she later said that the president constantly weighs the impact of his words.

“We have been very much made aware of these issues in the Black community, but for him to acknowledge them and to share with us his understanding was very, very powerful and hopeful,” she said.

Over the course of his career, Biden has spoken about race and racism in America in stark terms. House Majority Whip Jim Clyburn, D-S.C., described the president’s plain-spokenness as one thing that drew him to Biden.

“He’s put forward the kinds of proposals that maybe don’t go as far as I would put them, but he is really doing things that demonstrate forward movement on some very controversial issues.” Clyburn said. “I think he’s been plain-spoken when it comes to things like voting and voting rights.”

But the way in which Biden initially spoke about the killing of Wright raised questions. Biden initially referenced the body camera footage that shows the final minutes of Wright’s life and said that it remained a question whether the shooting had been an accident.

“That remains to be determined by a full-blown investigation,” Biden said. “But, in the meantime, I want to make it clear again: There is absolutely no justification — none — for looting, no justification for violence.”

Rep. Jamaal Bowman, D-N.Y., who has publicly pushed back on Biden’s response, said it “tears at the fabric of my very soul … because the instinct is to assume that the person who was killed did something wrong and may have deserved it.”

Bowman said that Biden and other white leaders need to demonstrate their empathy to understand how Black people feel when seeing another Black person killed by police.

“We need to see the same urgency and feel the same urgency from the president when it comes to Black lives and from all of us as elected officials, as leaders,” Bowman said. “Do we value Black life more than we value property?”

The video of Chauvin with his knee on Floyd’s neck in the final moments of his life ignited protests around the world and spurred a racial reckoning that changed the course of the presidential campaign. Biden was elected after naming systemic racism as one of four major crises facing the nation. And voters put him into office along with Kamala Harris, the nation’s first Black and first Asian American vice president.

“What we need to hear from President Biden and Vice President Harris is that they will do everything in their power to address this pressing crisis in this country and that it will be a central organizing policy push,” said Aimee Allison, the founder of She the People.

She warned that if the White House does not directly address these issues, many people who turned out for Biden and Democrats in 2020 may not do so again.

“I think at this point where the constant barrage and news of the violence and dehumanization of Black people, of brown people, at the hands of government employees — police — there’s a sense that something must be done,” she said.

But Biden has also projected himself as an ally of police, leaving him facing pressure on two fronts.

But Derecka Purnell, a lawyer and activist, sees Biden’s relationship to law enforcement and commitment to police funding as the core of the issue.

“That Joe Biden has pledged to give more money and more resources to the police in 2020 during the largest protests in history that happened to be against police violence is not so much of a disconnect, but continuity, given his long legacy and commitment to funding and supporting different policies that are harmful to Black people in this country,” Purnell said.