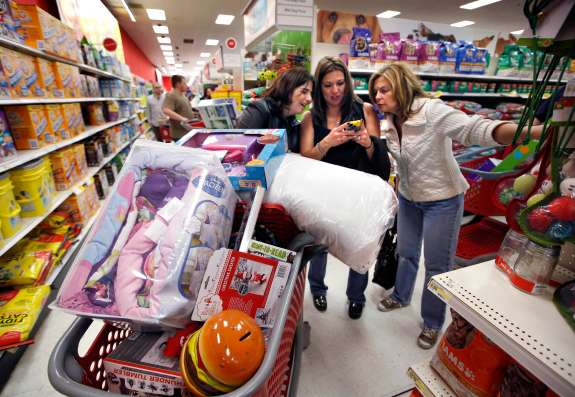 Each December, economists make predictions. And each new year, they get hit by unexpected events that make them look more clueless than prescient.

This year’s bolt out of the blue was the plunge in oil’s price, which no one saw coming.

Still, top economists’ forecasts did get a lot right for 2014. One year ago, most were predicting healthy growth, tame inflation, low interest rates, rising stock prices and declining unemployment — and that’s just what we got.

Now they are looking ahead, and once again, their forecasts are brimming with good cheer. These are among the most common predictions for 2015:

GDP will keep growing quickly. The gross domestic product — a measure of all U.S. goods and services — has been on a tear. The Commerce Department’s latest revision shows GDP advancing at an astonishing 5 percent over July, August and September.

That growth spurt suggests the U.S. economy has momentum heading into the new year. Lower energy prices will give consumers more money to spend, and that should help boost revenues for stores, restaurants, hotels and more.

“Our assessment for growth in 2015 will now be around 3 percent,” Doug Handler, chief U.S. economist for IHS Global Insight, wrote. For an economy in its sixth year of expansion, a 3-percent annual pace would be impressive.

Employers will hire and pay more. In 2013, the unemployment rate averaged 7.4 percent. Last December, economists were predicting a slide to about 6.6 percent.

As it turned out, the jobless rate tumbled to 5.8 percent, and now economists see the rate dipping to 5.5 percent or lower in the coming year.

“With stronger economic growth, the U.S. will add about 230,000 jobs per month on average next year,” according to the forecast of Gus Faucher, senior economist at PNC Financial Services Group. That would add up to about 2.8 million net new jobs in 2015.

Currently, the country has 2.8 million people struggling with long-term unemployment. So if Faucher’s prediction were to come true, workers finally could enjoy a healthy market where job openings and willing workers would match up. And the increased demand for workers would help push up stagnant wages.

Inflation will be exceptionally low. Even though the economy has been heating up, the price of energy has been cooling. The year began with crude oil selling for about $110 a barrel, and is ending with the price at about half that. Oil’s plunge has driven down prices for gasoline, home heating oil, jet fuel and more.

Seeing that change, the Federal Reserve has sharply cut its forecast, saying that inflation will run between 1 percent and 1.6 percent in 2015. That’s down from a September forecast of 1.6 percent to 1.9 percent.

For example, when this year began, the average 30-year fixed-rate mortgage was carrying an interest rate of 4.43 percent. Most economist thought that rate would rise. But as the year wound down, the 30-year rate was running at about 3.75 percent.

Nevertheless, economists think this time is different and that rates really will rise in 2015. In a mid-December statement, Fed policymakers said they “can be patient” when it comes to timing a rate increase, but most economists figure patience will run out by midyear, and that will lead to a slow, steady ratcheting up of interest rates to more normal levels.

When it comes to the strategy of holding down rates to stimulate growth, “we believe the Fed’s work is now done,” said Bernard Baumohl, chief global economist with The Economic Outlook Group.

Stocks will go higher. The stock market has been zooming up for years now. The Dow Jones industrial average stood at 6,627 in early March 2009, during the worst of the Great Recession. But with the recovery going strong, the stock average has been pushing above 18,000.

Some skeptics think the stock market is due for a “correction” that would knock down prices by 10 percent or more in 2015. But the more typical prediction is that with oil prices running so low, investors will want to keep putting money into companies that stand to benefit from increased consumer spending.

Howard Silverblatt, senior index analyst at S&P Dow Jones Indices, summed it up in a recent tweet, saying “high-octane optimism once again prevails on the Street.”