Long After The Hurricanes Have Passed, Hard Work — And Hazards — Remain 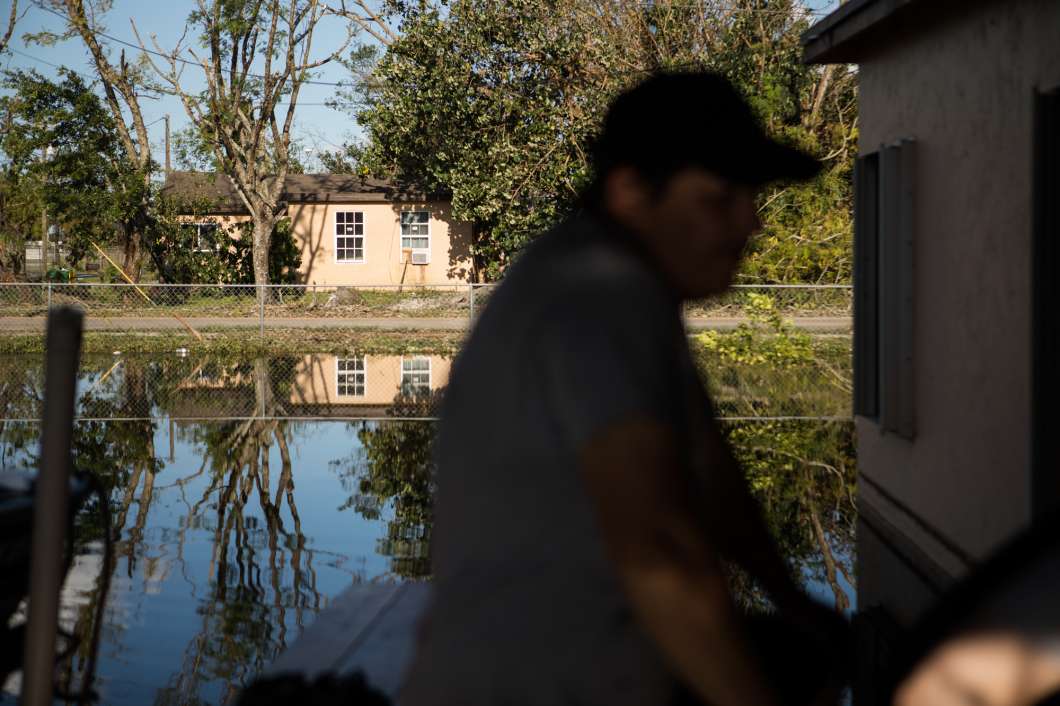 Flooding in Immokalee, Fla., after Hurricane Irma hit was still present days afterward. Public health officials say that even after waters recede, issues such as mold and mosquitos can remain.

Those storms have long since dissipated. Now much of the focus has shifted to Hurricane Maria, which remains an active storm — a storm that caused devastation in Puerto Rico, which is still reeling from the immediate impact.

But while the winds and rising waters of Harvey and Irma are no more, the health risks created by those storms still linger. Puerto Rico and other parts of the Caribbean will face similar risks for months to come.

Power outages after a major hurricane are a threat to people who rely on medical equipment like ventilators — and can be dangerous, even deadly, for vulnerable populations stuck without air conditioning. Meanwhile the loss of jobs, houses and cars, and long-term displacement of evacuees, creates economic turmoil with lasting consequences for health.

There’s a whole set of insidious physical threats, many of them brought invisibly along with rising waters.

What water brings with it …

For six days after Hurricane Irma, Gary van Gorp’s neighborhood in Fort Myers, Fla., was flooded. It filled up like a bowl, with small fish darting over lawns and pavement.

“This water, after a while, is the most intrusive thing,” van Gorp said on Sept. 13, standing in the middle of the flooded mobile home park. The community flooded twice in two weeks, after years without a problem. “It’s so much worse than just having downed trees.”

His home was elevated enough to be livable, but it was surrounded by standing water. He waded through it multiple times a day — it was the only way to get food or take his dog out.

Moving through standing floodwater is strongly discouraged, but after a storm, many people find themselves in contact with water at some point.

“If water has been standing for about three to four days, you can anticipate many of the microorganisms going in those waters automatically,” says Naresh Kumar, a public heath expert at the University of Miami’s Miller School of Medicine. He says E. coli bacteria and the parasite cryptosporidium are perils, especially if there’s been any sewage leakage; both can cause diarrheal disease.

“Contamination of wounds and lacerations tend to occur in storms and in flood situations, particularly when people are busy cleaning up,” says Esther Chernak, a Drexel University professor and an expert on emergency preparedness. And there’s also the risk of chemical contamination of waters, especially in areas near industrial sites.

Umair Shah, executive director of Harris County Public Health, spoke to NPR by phone as he drove around the greater Houston area trying to educate the public about the hazards that remain.

He says that hospitals in Harris County had already reported a “slight uptick” in gastrointestinal illness and skin infections after Harvey.”

… And what it leaves behind

The waters don’t stay forever. In Harris County, Shah says, the extraordinary floodwaters have largely receded. In Fort Myers, the water that surrounded van Gorp’s home has finally been pumped away.

But the things it touched? They’re still there.

“I’m covered in mud,” van Gorp tells NPR. He works as a handyman sometimes, and has been busy helping his neighbors recover, especially the elderly who can’t help themselves. “I’ve got, like, 20 calls from people wanting this and that.”

He’s pulling soaked insulation from under houses and ripping out flooded carpets.

Removing flood-damaged materials is important after a storm, but Shah knows it’s not always easy — both physically and emotionally.

He says he’s heard from parents: “You have a 5-year-old who’s already had floodwater in their home … and now you have their favorite toy and you say, ‘We can’t clean or disinfect this and we’re going to have to throw this away.’ Think about how psychologically devastating that conversation is.”

And hygiene is important, he emphasizes. “Wear gloves,” Shah tells Texans. “Wear masks. Make sure you have ear and eye protection. … Wash your hands frequently.”

Even if the floodwaters were completely uncontaminated — without a trace of fecal matter, parasites, bacteria, petroleum or other chemicals — they would still be dangerous.

Between roof damage and rising waters, moisture can find new places to take hold in a house. And especially in humid, warm environments like Texas and Florida , that creates a welcoming environment for mold and mildew, which are linked to allergies, asthma and other respiratory conditions.

“The fungi will make their home and … unless you just break down the roof or change all the air ducts, they are likely to stay there,” says Kumar. He notes they can linger for years.

Immediately after the flooding, a dehumidifier can help, he says, along with a thorough cleaning of your air-handling unit.

Chernak says there’s no magic solution for mold and mildew, “short of getting rid of flooring and drywall and housing materials that have been wet.”

The water can also pool in unexpected places. If left undisturbed, it becomes a potential breeding ground for mosquitoes.

That’s another risk for human health, as mosquitoes are disease vectors tied to things like West Nile and Zika. And in south Florida, Kumar says, the weather is about to be absolutely perfect for mosquito breeding.

Houston was nearing the end of the mosquito season when the storm came, Shah says — but now, officials are back on high alert, conducting aerial sprays and encouraging residents to drain standing water that might still be pooled after the storm.

“You have a lot less shady area than you used to have,” he says. “People who generally stay in shelter, walk in shelter, they will have higher exposure.”

But the very first concern that he mentioned was a different one: Anxiety and depression. That was a peril as soon as the storm hit, and one that will last for months and years to come.

In Houston, Shah also kept coming back to the psychological toll, tied closely to the extent of the personal and economic losses.

“We still have people that have not been able to go back to their homes,” he says. “The honest truth is a lot of people don’t have homes to go back to. … The long term psychological and social impact is something that we’re going to continue to be facing for years.”

Then there are the memories. He describes a resident who was evacuated to a hotel.

“When she was hearing the air conditioner that turned on, and the drip drip drip of the water, that that gave her flashbacks to the drip drip drip of water as she was evacuating her home and floodwaters were coming up,” Shah says. “That’s in the back of my mind, when I hear and I see rain now.”

“This is something that is going to impact all of us for the rest of our lives.”