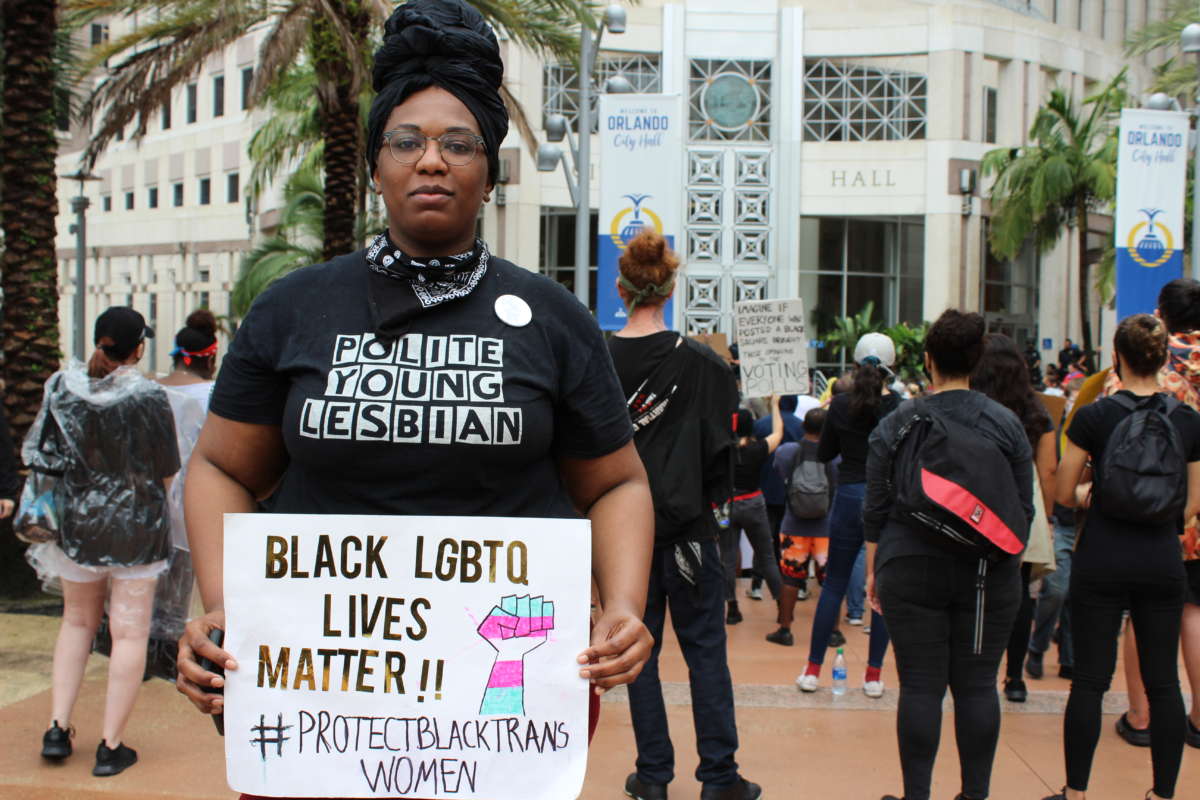 Torrie McGriff was at the protest with her younger sister. “I’m standing here again as a black woman, as a lesbian, saying that I am here because black lives matter, but we can’t pick which black lives are in that group," said McGriff. Photo: Matthew Peddie, WMFE

A jury found former Minneapolis police officer Derek Chauvin guilty on all the counts he faced over the death of George Floyd.

Orange County Mayor Jerry Demings, a former Orlando police officer himself, says he is pleased with the jury’s findings.

In a statement he says that most police officers are good public servants, but, “when officers cross the line and commit criminal acts, they must be prosecuted no differently than the people they serve.”

“We have all waited with great anticipation for the verdict in the trial involving the murder of George Floyd. As a 40-year veteran of law enforcement, I am pleased with the jury findings … “

His wife, Congresswoman Val Demings, says justice has prevailed but this is not a happy day as George Floyd should have never been killed.

In a Tweet, she says as a healing nation it isn’t time to rest but, “continue to have a sense of urgency to come together and work together with one purpose in mind: to do better.”

Orlando City Mayor Buddy Dyer says the guilty verdict won’t bring George Floyd back to his family or diminish the pain and anger felt around the nation. But the verdict will serve as motivation, “to work harder to make changes to end systemic racism.”

The guilty verdicts announced in Minneapolis won’t bring George Floyd back to his family. The verdicts also won’t diminish the pain and anger felt around the nation and in our community over his horrific killing and the killings of other people of color in the United States.

In a Tweet, Mina urges residents to remain calm in their response to the verdict and says he hopes law enforcement and the community can continue to move forward together in a spirit of trust.

Here is my statement on the verdict in the Derek Chauvin trial: pic.twitter.com/NEFTk2XgJO

Orlando Police Chief Orlando Rolon says it was only right that law enforcement officers are held to a high standard.

In a Tweet, Rolon says officers must earn the trust of the public and, “ the individuals who tarnished the badge are not a reflection of the entire profession. We must do everything in our power to change the minds of those who believe the law enforcement profession is broken.”

UPDATE: Here is a statement from @OrlandoPDChief regarding the guilty verdict in the Derek Chauvin trial. pic.twitter.com/ydsYB3JGLU